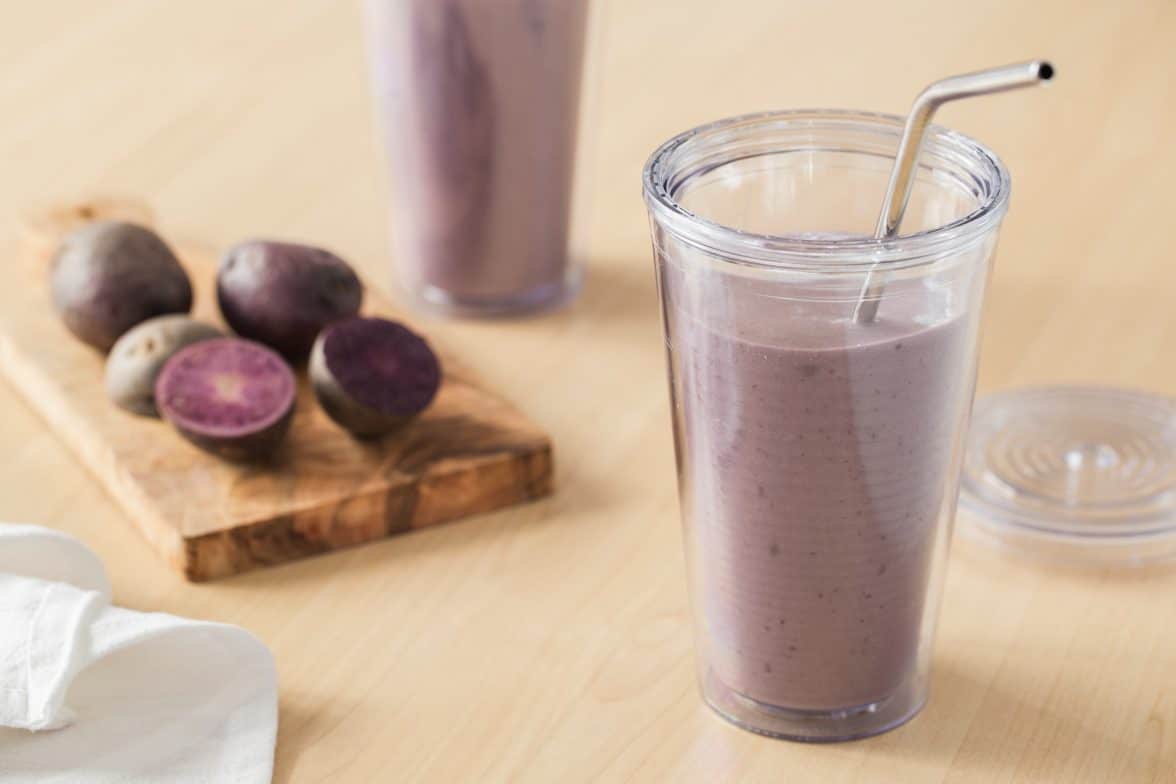 The Potassium Potato Smoothie was developed by Carissa Bealert, RDN. This vibrant purple smoothie gets its colour from purple potatoes and pomegranate juice. Containing 26 grams of carbohydrates and 19 grams of protein, this smoothie may aid in post-exercise recovery. (Photo: Sarah Reece, Potatoes USA)

Alliance for Potato Research and Education aims to fight negative stereotypes about potatoes.

Do potatoes belong in a healthy diet? Following a decades-long tide of negative buzz about the potato’s role in weight gain, diabetes and a host of other ills, this is the question the potato industry would like to answer once and for all with a resounding “yes!”

Thanks to a recent initiative focused on potatoes and health, the industry is a big step closer to that goal, according to John Bareman, chair of the Canadian Potato Council and a board director with the Alliance for Potato Research and Education (APRE).

In 2016, APRE, a joint venture between American and Canadian growers and processors, decided to focus on funding new scientific research on the connections between potatoes and nutrition.

“Potatoes, especially processed potatoes, have gotten a bad rap from what you might call ‘pseudo-science,’” says Bareman. “To turn this tide around, APRE is focused on showing that potatoes fit well in a healthy diet.”

APRE issued its first-ever request for research proposals in 2017, and has already funded 11 studies along with two already in the pipeline, which should be published this year. APRE hopes to fund an additional six to eight studies in 2018.

Peter Johnston, vice-president of Quality Assurance for Cavendish and secretary-treasurer for APRE, says the organization is intent on driving new questions about the links between potatoes and health. All studies funded through APRE will be published in peer-reviewed scientific journals – regardless of the results, “because what that does is drive new questions,” says Johnston.

He says APRE was pleasantly surprised by the numbers of letters of intent they received from scientists globally – over 100 – when they issued their first RFP.

“In 2018 we repeated the process and we received large numbers of responses from some of the scientists we didn’t fund in 2017, and from new researchers,” he says. “So researchers are recognizing who we are as a reputable organization that’s supporting clinical trials.”

Michelle Kijek is a senior vice president and group lead at FoodMinds, a food and nutrition communications agency hired by APRE to develop the organization’s scientific research priorities and manage its RFP process.

“We hope to publish positive messages about potatoes every two to three months about the role of potatoes in the gut microbiome, in strong athletic performance, in a healthy diet and healthy weight,” says Johnston.

Kijek stresses, along with Johnston, that APRE encourages researchers to publish all results, regardless of outcome, and APRE has no involvement in the actual trials or publication process in order to maintain the program’s credibility.

Research like this is sorely needed, Kijek says, because the industry has generated a lot of observational research, which helps in identifying associations between potatoes and health, but much less clinical trials focused on consumption of potatoes.

“This is really the first time that APRE has been able to fund significant clinical trials related to potatoes,” says Kijek.

Some negative perceptions about potatoes may already be changing, thanks to outreach and educational efforts by key players in the industry.

In the U.S., Potatoes USA, which is also part of APRE, does an annual attitude and usage survey amongst consumers across the U.S. The survey encompasses a wide swath of demographics in both urban and rural settings.

Since 2012, food dollars spent on home cooking have declined, she says, with more dollars being used on food purchases out-of-home, despite an increase in the volume of in-home consumption.

But survey respondents, on the whole, had positive perceptions of the link between potatoes and nutrition. In 2017, over 70 per cent of respondents rated potatoes as being “good” or “excellent” in terms of being healthy, says Reece.

She says the organization’s research has highlighted athletes as a major area of opportunity for outreach.

“Eighty-four million people exercise at least two times per week,” Reece says. “While all of these people are enjoying potatoes they’re not the top of mind when they think of what they should eat to fuel their performance.” In the 2017 survey, potatoes were rated fourth after bread, pasta and rice in terms of foods used as a source of carbohydrates for performance.

But Reece says potatoes deserve to be higher on the list, especially as they are sources of protein, fibre, Vitamin C and potassium as well as carbohydrates.

“When we talked to consumers and gave them this nutritional information about potatoes, they were really surprised,” she says.

This year, Potatoes USA was the official performance vegetable of Ironman 70.3 Boulder (in Boulder, Colo.), and the organization also had a key presence at the Walt Disney World Health and Fitness Expo. The organization has also begun a collaboration with the American College of Sports Medicine. Many positive conversations have resulted from these efforts, says Reece, and there are more to come.

While there are no exclusively Canadian initiatives focused on potatoes and health, Bareman says APRE’s new research-oriented efforts represent a hopeful shift for the industry as a whole, which should have a positive influence on consumer spending – and eating – all over North America.

“Personally I believe we have hit the bottom of the consumption decline and the trend seems to be going up again,” he says. “Our ultimate goal is to show that potatoes definitely belong on the right side of the plate.”