Potato Europe 2018 once again established itself as a major meeting place for the international potato industry. With around 10,000 visitors from over 60 countries, at the end of the second day of the fair the organization of the specialist event at Bockerode Estate (Northern Germany) can look back on a successful edition. Only the rain on the second day of the fair was a minor disappointment, as the majority of visitors preferred the covered hall instead of the demos and stalls in the outdoor area. However, this benefited the machine suppliers, seed suppliers and packaging stands in the covered hall.

The fair was a true paradise for all lovers of modern and future-oriented technology, as sorting techniques and packaging are delicate issues in today’s potato industry. Among other things, the Sorma Group, Skals, Schneider and the Haith Group presented their latest developments in mechanical engineering. Various optical sorting systems were absolute eye-catchers. There is clearly a great need for sustainable materials in packaging, but at the same time, efficiency and high cyclic rates are wanted. Among other things, the Cartomat company, based in Willich, was present with a new packaging line (cartoPaper). The classic jumbo bags are still in development as well. 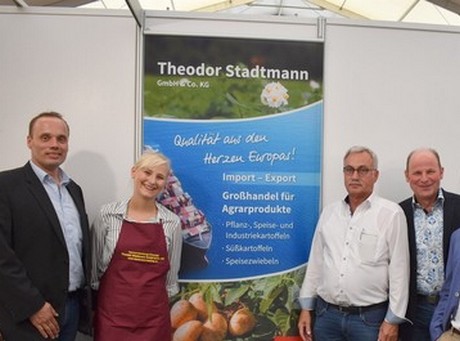 Storage Technology
Another hot topic within the potato industry is high quality storage technology. The attending trade visitors also showed great interest in cooling systems and strong, sturdy storage boxes. For example, OmniVent presented the new OmniBreeze installation, where water vapor is distributed evenly over the stored potatoes in the smallest possible amounts. This benefits the quality and life of the stored potatoes. The demand for high-quality storage boxes -whether made of wood or steel- also remains high. Several Polish manufacturers of storage boxes were present to promote their product, including Bimex Wood and Inter Agra, as well as the German Paul Maagh GmbH, based in Lithuania.

Seed and variety development are also recurrent topics within potato cultivation. Solana presented a range of new potato varieties for conventional and organic farming. Interseeds has also developed a variety of interesting varieties for the industry: for example, the Chenoa (chips) and the Austin (chips). Next year, the product portfolio will again be expanded with three varieties.

Kazakhstan and China
Seed company Europlant was on site as well, with some interesting guests: accompanied by an experienced cultivation consultant, a delegation from the fast growing and modernizing cultivation area of ​​Kazakhstan took a look into the “European” kitchen. It is expected that potato production in Kazakhstan and Central Asia will also develop significantly in the coming years, soon to focus on exports. China is also developing rapidly in the potato industry. A special delegation was present to announce the China Potato Expo: this international potato event will most likely take place on Chinese soil in May 2019.

Tater Tales Eugenia Banks - January 23, 2023 0
How to save your potato crop when hot temperatures happen. As a consequence of climate change, Ontario has been experiencing summer temperatures that exceed what’s...

Diseases Staff - January 24, 2023 0
The Prince Edward Island Potato Board is calling on the federal government to listen to the findings from an international panel of experts who...

Summer 2021 Eugenia Banks - August 23, 2021 0
Common scab continues to cause concern for potato growers. Common scab, caused mainly by the seed and soil-borne bacterium Streptomyces scabies, continues to be a...