Sunny, balmy weather this week allowed growers to make lots of progress with the harvest.  Many growers have finished digging.

According to Mark VanOostrum, 80 per cent of the chipping crop has been dug.  The size profile is better than expected, and the quality is very good.  Rainfall was below average in June, July and August in the Alliston area, which resulted in poor crops in non-irrigated fields.

I visited P & K Vanderzaag Farms today and saw Lamokas in storage.  The tubers looked to be of excellent quality, and the size profile was good.  It was great to see such a nice crop. 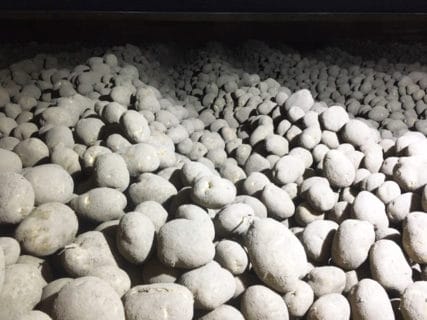 “Yields have been very good along with quality. We are having a record year.  All growers in the Simcoe-Delhi area are close to finishing. Some this coming week, others next week,” said Joe Lach (Norfolk County). In Norfolk County, May, June, July and August had above-average rainfall.

Yesterday, the Shelburne-Melancthon area was buzzing with diggers, windrowers, potato trucks and … seagulls. The birds know where the earthworms are (4.3 per cent organic matter at Tupling Farms).

Last but not least, I found tubers last week with disease symptoms that stumped me. The lesions were old, but a couple of days ago I found fresh lesions that looked like PVYntn. I sent photos to Mathuresh Singh, a well-known virologist from New Brunswick who agreed with me.  I will send him diseased tubers to see if he can confirm the diagnosis in the lab. 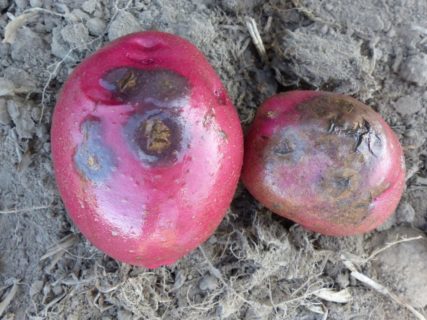