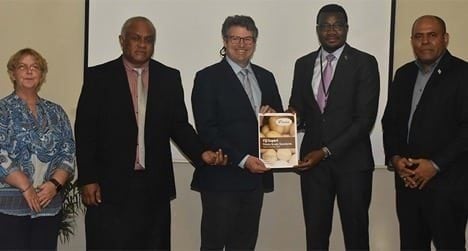 Its chief executive, Chris Claridge, made the comments during the Biosecurity Authority of Fiji’s (BAF) bilateral meeting with the New Zealand Ministry for Primary Industries (NZMPI) in Nadi on Tuesday.PNZ was representing the interests of the New Zealand potato industry at the meeting.

“On behalf of Potatoes New Zealand, I would like to make a commitment in ensuring the quality of potatoes that we send from New Zealand to Fiji will remain at the highest possible level,” said Mr. Claridge.

He thanked BAF and NZMPI to allow PNZ to also have an input into the discussion.“We are committed to helping the local potato industry grow and develop over time,” Mr. Claridge said.“We feel that potatoes make an excellent food. They should be eaten with all meals from our view. Everyone loves potatoes and we want to share our knowledge to have a growth.”

Potatoes are reasonably complicated crop to grow.They are vulnerable to a lot of different diseases like soil-borne, fungus and bacterial.“We have quite a lot of technical knowledge to manage potatoes, how to ensure it is disease free and how to achieve yields,” Mr. Claridge said. “We have quite a huge research and development program in New Zealand on potatoes, with our local research organizations we are able to transfer some of that knowledge here.”

He added that they are be able to identify a variety that might grow better here and is robust to cope with the Fijian climate conditions.

Ministry of Agriculture acting director of crop research, Apaitia Macanawai, said in 2012 Fiji started potato production and imported 8,200 tonnes of planting materials from New Zealand.“We imported potatoes from New Zealand, but we struggled a bit; maybe the variety was not suitable to Fiji’s conditions,” said Macanawai.

“With the assistance put in place today, we will come back to New Zealand as they have committed to assist us and plan to introduce tropical varieties to grow in Fiji,” he said.

PNZ. became incorporated in 2012. Previously it had been operating as a product group within Horticulture New Zealand.

Positive outcomes were reached at the meeting, said BAF chief executive officer, Hillary Kumwenda.He said it was a clear demonstration of the relationship between BAF and New Zealand’s primary industries ministry.

The stakeholders also discussed implementing an updated system to ensure the health and quality compliance of potatoes destined for the Fijian market. “We started exchanging views on how actually to improve.We have agreed going forward to actually host a representative from Potato New Zealand that will come to Fiji,” said Mr. Kumwenda.

“That person will make a trace of the quality of potatoes when they leave the farm gate until the time it reaches the wharf and up to the shelves.”He said BAF would also monitor the size of potatoes coming from New Zealand to Fiji.