Ian Scott and his team are investigating why potato beetles appear to be less susceptible to the neonicotinoid class of insecticides and are gathering information on how alternative classes of insecticides might be used to combat the pests. Photo: Alex Molnar/AAFC

New Tools for the CPB Toolbox

A five-year study is to take a closer look at the alternatives to neonics for the control of Colorado potato beetle.

A study being conducted by researchers at Agriculture and Agri-Food Canada’s London Research and Development Centre could soon provide Canadian potato growers with new insight on how to fight one of the industry’s most troublesome pests — the Colorado potato beetle.

The five-year study is officially known as the Development of Regional Management Strategies and Decision-Making Tools for Control of the Colorado Potato Beetle. Work on the project began this past summer and is scheduled to continue until 2023. The study is being jointly funded by potato producers and the federal government.

The purpose of the study is twofold: to investigate why potato beetles appear to be becoming less susceptible to the neonicotinoid class of insecticides and gather information on how alternative classes of insecticides might be used to combat the pests.

“Studying the alternatives to neonicotinoid products (Actara and Titan) is the number one objective of the project, especially with the growing concern neonics may not be around that much longer,” says co-lead researcher Ian Scott.

“If the growers lose that chemistry because of resistance or regulatory decisions, they’re going to be entirely reliant on the other classes of insecticides that are registered for potato beetles. Many of them have only used the neonics, so they’re not that familiar with how these other products are going to work for them. That’s the sort of information we’re hoping to give them through this survey.”

As part of the study, Scott and his team of researchers collected more than three dozen populations of adult beetles from potato growers across the country this past summer including parts of Prince Edward Island, New Brunswick, Québec, Ontario, Manitoba and Alberta.

Those beetles, along with their lab strain counterparts, were placed on insecticide-treated potato leaves with concentrations that were developed in the lab to determine the beetles’ susceptibility. In addition to neonicotinoids, two other classes of insecticides are being studied: spinosyns (Entrust and Delegate) and anthranilic diamides (Coragen and Verimark). 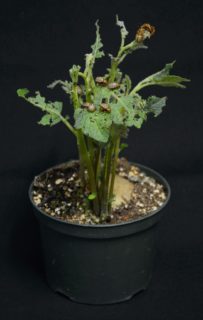 If growers lose neonicotinoid products because of resistance or regulatory decisions, they will be entirely reliant on other insecticide classes, says Ian Scott.
Photo: Alex Molnar/AAFC

As of mid-December, the researchers had wrapped up studying most of the sample beetles they received from growers in Ontario, Manitoba and Alberta, and were planning to finalize their analysis of the remaining samples from the East Coast by early January 2019. They expect to produce a final summary of their findings by late January.

Preliminary findings of the study have shown some interesting, and in some cases surprising, results. That’s been particularly true in the case of the diamides class of insecticides, says research technician Sophie Krolikowski, who has been coordinating the beetle rearing and lab bioassays for the study.

“In terms of big picture trends, we’re seeing that diamides are not too frequently used so [the beetle’s] susceptibility has been observed across the board in all the provinces that we’ve tested so far,” she says.

“We’re also seeing for the most part greater resistance to products in the other two classes (neonicotinoids and spinosyns) in Manitoba compared with Alberta and Ontario, while in Alberta we’re seeing more susceptible populations than the other two provinces. Ontario has been a bit of a mixed bag. We’re seeing some resistance, but also a good amount of susceptibility to all three insecticide classes.”

Scott says one of the surprising trends the researchers have noticed is how the potato beetles have reacted to the spinosyn class of insecticides, which are the only option for organic growers.

“We’re starting to see a reduction in susceptibility in those populations. I’m sure [organic growers] are very concerned that unless they get other registered products to use, they’ll be forced to collect the insects by hand,” he adds.

One of the more disturbing trends that has been noticed, Scott says, is what appears to be increased resistance to neonicotinoids among potato beetles in Manitoba. The study’s preliminary findings indicated a 50 per cent reduction in susceptibility in that province’s sample beetle populations.

When asked why susceptibility levels appear to be declining in the province, Scott replies: “Neonics have been the mainstay product for over two decades and growers still want to use it because it has worked so well. Unfortunately, we’ve now reached the point where the beetles are not responding to it as in the past.”

“The information that we’re trying to gather will demonstrate that there is growing resistance to this one class so that we can emphasize to growers they should be switching insecticide chemistries and trying to use a different class, if not within that same season then maybe the next season.”

Dan Sawatzky, manager of Manitoba’s Keystone Potato Producers Association, acknowledges while neonicotinoids are still relatively effective in fighting potato beetles in the province, resistance appears to be increasing, particularly in the Winkler area. Exacerbating the problem is the fact Manitoba producers are seeing adult beetles and larvae mixed together in their fields, making it difficult to know when to apply insecticides.

Although he doesn’t think growers are likely to quit using neonics in the immediate future, Sawatzky says having more information on alternatives will allow them to make more informed decisions down the road.

“The alternate products that we have certainly don’t seem to be as effective as the neonics were, but I guess that’s why we’re doing the study, to see what there is that might be an alternate product,” he says.

“When you lose a good product that’s working well you have to learn the most effective way of using the alternative products. I think that’s a key part of the education process in terms of having longer use and more effective use of what else there is out there.”

Scott is hopeful the information gathered as part of the study will help to highlight the underlying mechanisms responsible for the increased resistance of potato beetles to neonicotinoids and other insecticides. That could, in turn, allow researchers to develop improved diagnostic tools, including genetic biomarkers, which will alert growers when resistance is developing much earlier. 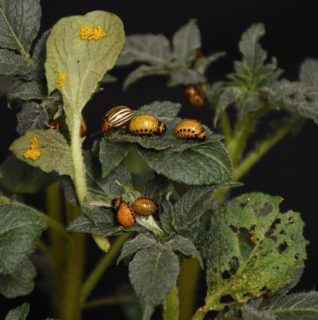 “If the biomarkers are there for neonics or spinosyn resistance, that would let farmers and extension people know this will become a problem if you continue to use the same product,” he says, adding right now growers usually have to wait until after the season to learn if control problems experienced during the season were due to resistance.

“At the beginning of the season they would know what to use or more likely what not to use. Right now, if they’re waiting on us for information it’s well into the fall or winter (before they have it).”

Although there are currently no plans to test or study any new insecticides as part of the study, Scott and his team are open to the possibility of working with any interested chemical manufacturers.

This is hardly the first time insecticides and their impact on potato production in Canada has been the subject of a study. What makes this one a little different from many previous studies, most of which were one year in duration, is that it is scheduled to run for five years.

“For us, it’s nice to have the security of that funding from year to year. In terms of supplies and personnel, we can know ahead of time that we’re going to be involved and be prepared,” Scott says.

The study is also unique in terms of the participation level of growers. A total of 37 growers submitted beetle samples from their individual farms while a number of grower organizations and provincial research bodies also provided assistance.

“It’s unique for us in that it’s the growers in each of the regions who are leading it,” Scott says.

“It’s nice to see that interest and everyone willing to work together to hopefully solve these problems. I think everybody realizes we’re approaching a critical point where they might lose a class of insecticides either because of the concerns about environmental problems or resistance is reducing its usefulness. Everybody needs to know what’s next. Can we rely on these existing chemistries or what sort of alternatives are available?”