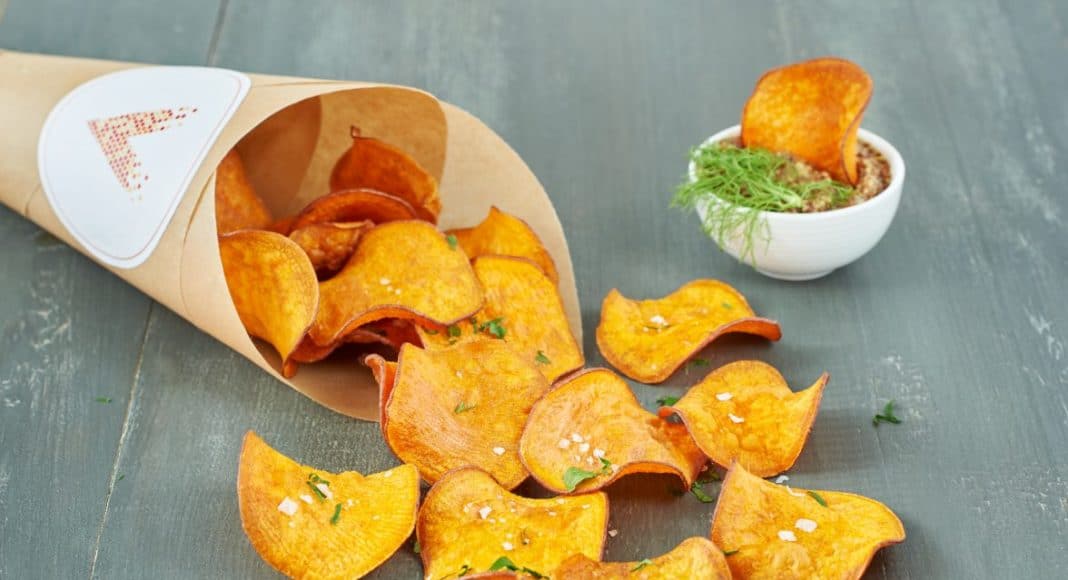 [deck]Hitting the market in 2019, Radiance is a new sweet potato variety developed by Ontario’s Vineland Research and Innovation Centre.[/deck]

Ready for commercial release in 2019 is Radiance, a new sweet potato variety developed in Canada to suit the country’s growing season and conditions. The variety is currently being trialed from coast-to-coast, and should be appearing in Canadian grocery stores next year.

Valerio Primomo, a research scientist and vegetable breeder at Ontario-based Vineland Research and Innovation Centre (Vineland), developed the variety with Canada’s unique growing conditions in mind, its shorter growing season being one.

Canadian growers typically cultivate Covington, a sweet potato variety commonly grown in the United States, Primomo says. However, Covington requires a long growing season in order for it to mature. As a result, harvest typically begins in October when the temperature begins to drop in Canada, making it difficult to avoid chilling injury. For this reason, Radiance is a big step forward, he says.

“We know that sweet potato is a Thanksgiving product, at least in the U.S. Now it’s a big thing in Canada. Retailers like Loblaws want to hit that market because they’ll sell a lot of it at that time of year,” says Primomo.

In future, other producers around the world may be growing Radiance, says Vineland’s research director of applied genomics, Daryl Somers. Eventually, the variety will be tested in the United States as well as other countries.

“There are even requests from the EU to test a Canadian-developed sweet potato in their environments,” says Somers. Vineland, he says, is Canada’s first and only not-for-profit horticultural research centre, and actively seeks out research and business agreements and partnerships.

Located in the town of Lincoln in the Niagara Region, Vineland is a world-class research centre dedicated to horticultural science and innovation. Its researchers in applied genomics, consumer insights, horticultural production systems and robotics and automation work to deliver innovative products and production solutions that address the needs of the horticulture industry and advance Canada’s research and commercialization agenda.

Somers says Vineland’s influence will continue to grow as the public sees value in the varieties being created there.

“What Vineland really delivers is this ability to look at the different horticultural sectors, the different commodity sectors, and pick which ones are going to be profitable — and it has to be profitable for Vineland. We have to have our own impact. Impact is not always revenue, but impact in the sense that we’re changing what we’re producing,” says Somers.

“We do import a lot of sweet potato into this country, and now farmers are waking up to the idea they can produce Canadian-bred sweet potatoes, get them into the marketplace and into Canadian retail chains. We’re pretty optimistic Canadian consumers will recognize these are Canadian products grown in Canada. It makes a big difference to what they purchase.”

Developed in Canada for Canadian Growers

Radiance is a new sweet potato variety suited to the Canadian growing season. Radiance was developed by Vineland Research and Innovation Centre and is said to thrive in Canadian growing conditions. Details include:

The Ontario government, along with the agri-food industry, has developed a comprehensive strategy to stop COVID-19 transmission and protect agriculture workers ahead of next...
Read more
Industry

The federal government is investing $1.9 million under the Emergency On-Farm Support Fund to help Manitoba farmers better protect the health and safety of...
Read more
Industry

The following piece is from our sister publication, Germination. After delays caused by the pandemic, the process of modernizing Canada’s seed regulations has officially begun. After...
Read more
Industry

The following piece is from our sister publication, Germination.After some uncertainty last week surrounding the closure of the Canada-U.S. border to all but essential...
Read more
Industry

At a news conference this week, Public Safety Minister Bill Blair said temporary foreign workers will be allowed entry into Canada after self-isolation for...
Read more
Tweets by SpudSmartMag