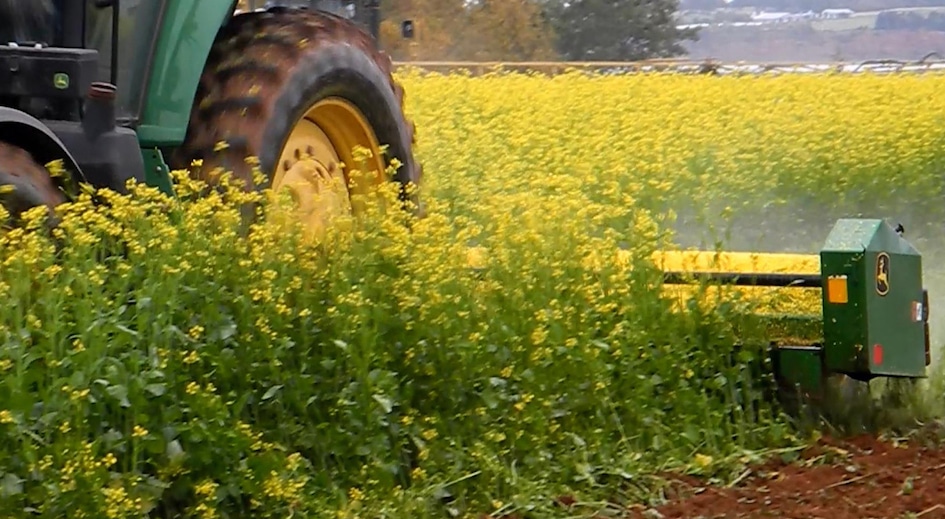 Mustard is mowed just before full bloom because that is when the crop’s effectiveness as a biofumigant and an organic amendment is at its maximum. (Photo: AAFC)

A recent study by Agriculture and Agri-Food Canada (AAFC) scientist Dr. Bernie Zebarth, together with McCain Foods Canada agronomists and the PEI Potato Board, identified potato early dying complex (PED) and degraded soil health as the two most important factors limiting potato production in the Maritimes.

This double threat has prompted Chen and his colleagues at AAFC Fredericton to conduct a project to evaluate dual roles of mustard green manuring: as a biofumigant to suppress PED pathogens; and as a way to boost soil organic matter and other properties associated with good soil health.

“Potato early dying complex is a soil-borne disease which results in premature vine senescence and can lead to as much as 50 per cent yield loss in potato production,” notes Chen.

He explains PED is a challenging disease for several reasons. “PED has been present for a very long time, but it has been long overlooked because the symptoms are quite variable and are difficult to distinguish from normal senescence, other diseases or even physiological problems.”

Another challenge is that the particular pathogen species that combine to create the disease complex can differ from place to place, and there may also be different strains of these pathogens with differing abilities to attack potato plants and differing responses to control measures. As well, “there is no standardized laboratory protocol to reliably quantify the pathogens,” notes Chen.

On top of that, only a few options are available for managing the disease. Certain potato cultivars have some resistance, and some recently registered fungicide products can suppress some of the pathogens. Although chemical fumigants can be effective, their use is not permitted in some parts of Canada, and they may not be cost-effective in some situations.

PED is mainly caused by the joint effects of Verticillium fungal pathogen species and root-lesion nematode species. To get a better handle on the PED situation in the Maritimes, AAFC researchers, together with provincial researchers from New Brunswick and Prince Edward Island, conducted a survey in 2016. They took soil samples from representative fields and used two different lab protocols to quantify the fungi and the root-lesion nematodes.

Verticillium dahliae is the main fungal species and Pratylenchus penetrans is the main nematode species causing PED in the region. The survey showed these two species are widespread in the Maritimes. The population levels varied depending on the field and the regional location. Some areas had high populations of both the fungus and the nematode – high enough to be of concern to growers.

Chen explains that Pratylenchus penetrans can synergistically enhance the severity of PED. “Without this nematode, Verticillium dahliae can cause Verticillium wilt, but the nematode increases disease severity, resulting in the PED complex. The nematode causes wounds on the roots, which provide openings for the fungus to get in. Also, the nematode itself damaging the plant makes the plant more susceptible to the infection by altering the plant’s physiology.”

He notes Verticillium dahliae and Pratylenchus penetrans both have wide host ranges so they can survive in the soil for many years.

The key way mustard can help manage PED is as a biofumigant. Chen explains that all the plants in the brassica family – such as canola, mustard, broccoli and cabbage – contain chemicals called glucosinolates. When the glucosinolates in the plant tissues break down in the soil, they are converted into gaseous compounds called isothiocyanates. Research has shown isothiocyanates are able to suppress or kill Verticillium fungi and root-lesion nematodes.

The effects on PED and soil health are not the only possible benefits from mustard crops. Mustards can also reduce various other soil-borne pathogens and insect pests through their isothiocyanate effect and/or through other brassica mechanisms, such as emitting compounds from their roots that suppress or kill such organisms. For example, brassicas can help with managing such potato pathogens as powdery scab, common scab and black scurf. And research by Dr. Christine Noronha with AAFC Charlottetown has found that green manuring with brown mustard significantly reduces wireworm damage to tubers.

“We initiated our project to give farmers a tool to add to their management toolbox for PED,” says Chen. “We are looking at mustard as an environmentally friendly management tool to reduce the severity of PED and improve yields.”

Chen and his colleagues are working with industry partners, including Potatoes New Brunswick and McCain Foods Canada, on this two-year project. Initiated in 2017 and continuing into 2019, the project is led by Zebarth and is taking place on one commercial field in New Brunswick.

In the first year, the project compared barley, a conventional rotation crop in the province, with mustard biofumigation. In the second year, potatoes are being grown on both treatments. Mustard needs to be grown in the year right before the potato year of the rotation to get the most benefit from the biofumigation.

For the biofumigation treatment, the research team grew two crops of mustard, chopped up each crop just before its full bloom stage, and immediately incorporated the chopped material into the soil.

Mustard is a short-season crop, and two crops can be grown on the same field in a single growing season in the Maritimes. “The first crop of mustard is normally sown in early June, depending on the weather conditions. The second crop is usually sown in August, two weeks after the incorporation of the first mustard crop into the soil,” says Chen. Growing two crops helps maximize the mustard’s benefits as a biofumigant and as an organic matter amendment.

The mustard is chopped at flowering because the crop’s glucosinolate content is highest at that stage and also the crop’s biomass is at its greatest volume.

He emphasizes the mustard must be incorporated immediately after chopping. “You cannot wait to incorporate the mowed crop because about 80 per cent of the fumigant gas is released in the first 20 minutes after mowing. So the timing is very critical.”

Ideally, incorporation takes place under high soil moisture and high temperature conditions to ensure good conversion of the glucosinolates into isothiocyanate. This can be a challenge in the Maritimes since irrigation isn’t commonly used in potato production in the region.

This project is a real team effort of AAFC Fredericton scientists. Chen is looking at the effects of biofumigation on PED pathogen populations and PED severity. Dr. Claudia Goyer, a soil microbiologist, is examining the effects of the mustard on the soil microbial community. Zebarth and Dr. Louis-Pierre Comeau, a soil carbon expert, are analyzing the effects on various soil properties such as soil organic matter content. And all the researchers are keen to see how these different factors relate to potato yields and quality.

The AAFC researchers hope to develop mustard biofumigation as one of the tools in an integrated strategy for managing PED, improving soil health and increasing potato yields in the Maritimes.

They would also like to conduct wider and deeper studies related to PED management. For instance, in addition to the mustard biofumigation/PED trials in the commercial field, Chen is starting a small-plot field trial in 2018 to evaluate the impacts of other rotation crops on PED. “Based on the literature, mustard is not the only crop that has an effect on PED. We are looking at some other crops that may affect PED to see which ones are better adapted to our region and which are more effective in controlling PED and improving potato yields,” he says.

The AAFC researchers are also involved in a demonstration trial on controlling PED with mustard in P.E.I. There, growers split their field to compare the effect of mustard with a conventional potato rotation crop on PED control in a number of fields.

Chen and his AAFC colleagues are hoping to compare various rotation lengths and crop types, including higher value options like pulse crops, to determine the effects on PED, other diseases and soil organic matter, and to find options that optimize both potato yields and net returns for growers.

“PED is not only a problem in the Maritimes, it is also in other provinces,” says Chen. “In the near future, we hope to study the disease nationwide to develop management practices tailored to the conditions in different provinces. Hopefully we can strengthen our management strategies and provide a toolbox to growers in different provinces to help make the Canadian potato industry more competitive in the global market.”

Very nice and interesting paper.I am thinking how this technology could be applied in Indian perspective where potato and mustard are grown in winter crop or even mustard as border crop in potato field.However,there is no short duration summer or kharif variety for green manuring of mustard prior planting of potato.