[deck]Potato production rose four per cent in Canada last year, even with difficult harvest conditions that limited the crop in Manitoba and Alberta.[/deck] 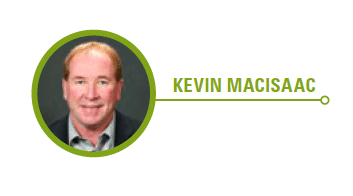 According to Kevin MacIsaac, general manager of the United Potato Growers of Canada, the total production number could have been considerably higher if not for difficult harvest conditions in Manitoba and Alberta, which resulted in thousands of acres of potatoes being left in the ground.

The total amount of unharvested potato acres in 2019 was just under 20,300 acres, with approximately 13,000 of those acres in Manitoba. There were 4,400 acres left unharvested in Alberta, according to the Stats Can report.

MacIsaac noted that in Manitoba, “it was a very nice-looking crop all through the growing season. It would have been tremendous if they had been able to get that harvested.”

MacIsaac said the Jan. 1 holdings were very close (within 0.5 per cent) to the 2017-2019 three-year average for that date, namely 69.2 million hundredweight of potatoes.

“A year ago, we were short and had difficulty stretching the fresh crop to the end of the storage season,” said MacIsaac, adding that pricing to date had been very good.

MacIsaac pointed out that on the processing side, the amount of potatoes in storage nationally was up about 750,000 hundredweight on Jan. 1 from the same time the previous year — which could cause supply problems in the coming months.

“That’s going to be an issue, because a lot more supply is needed on the processing side to keep up with the processing expansions,” he said. MacIsaac explained because of increased processing capacity in Manitoba and Alberta, processing plants in both provinces will likely need to import potatoes from elsewhere in the coming months.

Some are expected to come from Idaho; however, like some other American states, the large spud producer experienced major potato losses due to poor harvest conditions in 2019, MacIsaac said.

MacIsaac believes in Canada some harvested potatoes destined for the fresh market could be moved over to the processing sector, which would reduce fresh piles in storage and could end up strengthening prices for table potatoes. 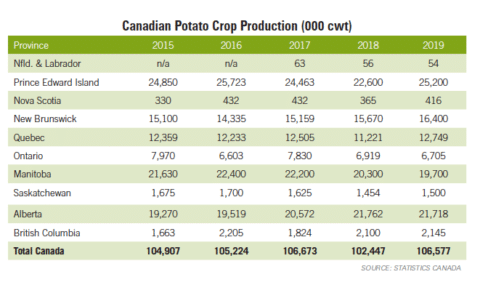 The federal government is giving $6.1 million through the Emergency Processing Fund to 34 food processing companies in southwestern Ontario to invest in safety...
Read more
Business

The Ontario government is providing $10 million in funding for farmers and agri-food operators to buy personal protective equipment (PPE), enhance cleaning and disinfection and...
Read more

A cross country check-in on what to expect for potato diseases this growing season. Late blight has and very likely always will be something Canadian...
Read more
Fall 2020

Spudnik has developed a 12-row machine which can fold up to a six-row base, enabling it to be moved from field to field easier. It...
Read more
Tweets by SpudSmartMag