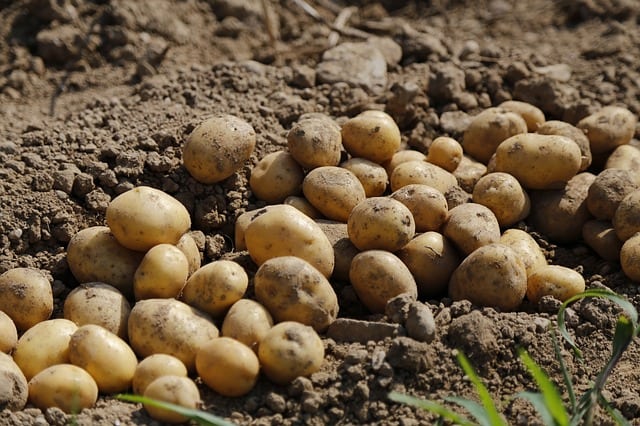 After drought struck the Maritime provinces Canada’s potato crop is expected to be 98.8 million cwt, down 7.7 million cwt from 2019, the Oct. 14 issue of North American Potato Market News (NAPM) says. This figure exceeds NAPM‘s September forecast by 800,000 cwt though.

Prince Edward Island’s production will fall to its lowest level since 2001, New Brunswick’s crop will be its smallest since 1973. Meanwhile in the Prairie provinces, production has rebounded but not by as much as the industry had planned, the report notes.

P.E.I. and Quebec are the only Canadian provinces with significant potato acres left to harvest with 25 per cent of the crop still in the ground, the report says.

“Wet weather is slowing harvest progress on the Island, but growers should have little problem finishing on schedule. However, persistent wet weather has Quebec growers concerned that they may not be able to get all of this year’s crop under cover.”

Increased production in Ontario and Quebec won’t be able to offset table potato losses in P.E.I. and New Brunswick, which could exceed 30 per cent — these four provinces produce the bulk of Canada’s table potatoes.

New Brunswick packing sheds are stockpiling potatoes from Quebec and P.E.I., to keep their operations running through the storage season, the report notes. However, this will leave P.E.I. even shorter on table potatoes. Canadian table potato exports to the United States are likely to be down 10 per cent or more.

Locally grown raw product for french fry plants in Manitoba, New Brunswick, and P.E.I. will fall short of pre-season budgets. Fryers in those areas are looking for extra supplies, the report says.

“However, raw product in most other North American processing areas is either balanced or in short supply. Alberta’s production and usage needs appear to be in balance. Idaho may be the only source of significant quantities of open processing potatoes anywhere in North America.”

Chip potato supplies will be up from last year in both Ontario and Quebec though, but chip plants which rely on potatoes from P.E.I., New Brunswick, or Maine will struggle and require replacement supplies. “Canada is likely to need at least as many early season chip potatoes in 2021 as it imported this year.”

Seed potato supplies for eastern potato growing areas could be extremely tight next spring, the report says. Reports suggest seed potato production in P.E.I., New Brunswick and Maine could be down as much as 50 per cent, due to this summer’s drought.