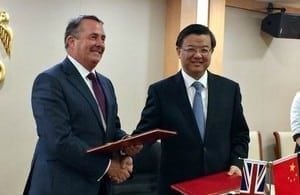 United Kingdom—China’s developing taste for chips and crisps will soon be fuelled by British produce, as International Trade Secretary Dr. Liam Fox MP secures a deal which enables the UK to export seed potatoes to China.

The deal is expected to bring major benefits to Scotland, with around 70% of the 100,000 tonnes of seed potatoes exported annually from the UK coming from Scottish farms. The seed potato export market is already worth an annual £90 million to the UK, with some varieties fetching up to £900 per tonne.

China is the largest global consumer of potatoes in the world. As the country’s demand for potato-based foods increases, the humble spud is now China’s fourth staple crop after rice, corn and wheat – with demand increasing at a rapid rate.

It follows news that the UK dairy sector is set to receive a multi-million pound export boost, with Dr. Fox meeting with the Chinese government to reach an agreement to allow the import of UK dairy products made with milk from third countries into China.

The agreement was signed by the International Trade Secretary during his visit to China. Dr. Fox is also meeting businesses and senior Chinese government ministers to discuss further trading opportunities between the 2 countries.

The rapidly-growing Chinese market offers huge potential for UK farmers. According to research by Barclays, around 60% of people in China would actually pay more for a product, just because they knew it was British.With China expected to have 220 cities with a population of more than a million by 2030, that is a huge market that UK potato farmers will now be able to make the most of.My international economic department is in 108 markets across the world, helping UK businesses to export whilst liberalising international trade by removing barriers to commerce. I’m delighted that this latest deal is set to boost our £67.5 billion trading relationship with China even further.

Scotland is known for high-quality food and drink exports, and our seed potatoes are renowned for their excellence and breeding through scientific institutions such as the James Hutton Institute in Dundee.Leaving the European Union means we can pursue an independent trade policy, and the quality of our exports will drive new trading opportunities like this one. Linking the world’s largest consumer of potatoes, China, with Scotland’s exceptional potato seed is a welcome next step for the UK on a global stage.

It’s a real coup to be one of the first western countries able to export seed to China and it’s been achieved through a lot of hard work and the great reputation of UK seed potatoes which are rightly renowned around the world for their high health status and high quality.I expect the Chinese market will be particularly interested in processing varieties used for chips and crisps as there is a big demand for those products. AHDB’s role now will be to develop this new trading relationship through events such as large-scale trade shows where exporters can showcase their varieties and start building business in China.

I am delighted that Scottish seed potatoes will now be enjoyed by the biggest producers in the world, the People’s Republic of China. This is welcome news for the Scottish seed potato sector and further recognition of its global renown for producing high quality seed potatoes.The signing of this trade agreement has the potential to lead to its expansion to the rest of the UK, opening up the possibility of market diversification and contributing towards further sustainable growth in the sector.Our food and drink exporters have had great success in recent years in opening and developing new and existing market opportunities, and I am utterly determined to continue to maximise these opportunities by delivering on agreements such as this.

In a further move to open-up its agri-food market, China also lifted its 2 decades long BSE ban on the exports of beef from the UK earlier this year – a landmark move for beef producers worth an estimated £250 million in the first 5 years alone.

Enforcing Plant Breeders’ Rights with the Help of Satellites