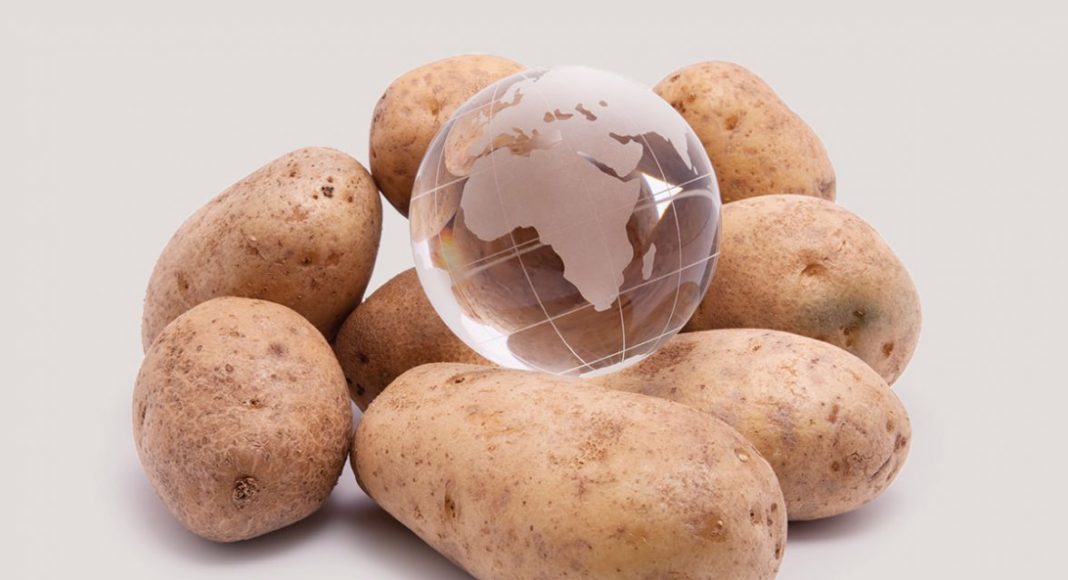 Announced by Agricultural Minister Gerry Ritz in Fredericton, N.B. on July 14, the national research effort is being led by Potatoes New Brunswick and involves the participation of scientists at Agriculture and Agri-Food Canada’s Potato Research Centre in Fredericton, N.B. along with University of Manitoba researchers, other research institutions and industry partners like McCain Foods.

It follows recent research looking at the role raw product plays in french fry production costs in Canada that has identified low per-acre potato yields compared to highly productive areas like the U.S. Pacific Northwest as a stumbling block to export growth.

“Our yields historically have been below trend line compared to the western United States,” says Matt Hemphill, executive director of Potatoes New Brunswick. “We’re leaving no stone unturned in getting answers.”

According to Shawn Paget, chair of Potatoes New Brunswick, the stakes for processing potatoes in Canada have never been higher, and the timing is right for research into how this country can stay competitive in the global potato market.

“This funding will allow Canadian potato producers to expedite the process and introduce new technology and best management practices to secure and develop export markets,” he says. “A national approach allows our industry to pool resources and make a concentrated effort to improve yields, secure grower profitability and increase competitiveness.”

“We want to be able to maintain and hopefully expand our export markets,” he says. “What is happening is that we are losing our competitive advantage because of limitations in our productivity. How can we get it back?”

According to Zebarth and University of Manitoba-based researcher Mario Tenuta, the answer may lie in two areas — soil health and stress factors that may be negatively affecting potatoes.

“We have short potato rotations, we don’t have a lot of organic matter being added, and this is leading to a decline in soil health. There are issues related to compaction. We tend to have wet spring and fall conditions, and heavy equipment induces compaction. We’ve known about this for a long time, but now it’s at the point where it can no longer be ignored.”

In the fields behind the research centre, scientists are growing potatoes in test plots, trying different compost mixes to boost soil health. Four of the composts are from wood wastes and manures, and one is marine-based. The composts also are being studied for their ability to suppress soil-borne diseases that can lead to things like potato early-dying disease (PED), a disease complex with the lesion nematode Pratylenchus penetrans and the wilt-causing fungus Verticillium dahliae believed to be the causes.

“We’re thinking maybe one way to go at it is to use compost to kick-start the process of boosting soil health,” Zebarth says. He notes that using compost is a way of adding organic matter quickly to soil, and it has the benefit of being stabilized — it isn’t subject to sudden chemical changes and as a result may be safely handled, stored and applied, meaning no adverse environmental effects result from its use.

“Work we did quite a few years ago in Manitoba indicated organic matter levels are very important in reducing incidence of PED in potatoes,” Tenuta says, adding that Alison Nelson with the Canada-Manitoba Crop Diversification Centre in Carberry, Man., is participating in the Manitoba research as well. “What I expect is when we look at yield variation within fields, we expect organic matter and salinity to be important as big yield determinates.”

Researchers are using a variety of tools to look at yield variability, and how it relates to soil health. They are conducting remote sensing work using drones to map yield variability within commercial potato fields. They are also mapping variation in soil properties with landscape position. This will help researchers identify the causes of yield variation, and how limitations to yield might best be overcome.

“That combination, we hope, will lead us back and turn the corner so we can start improving,” Zebarth adds.

In addition to the issue of compost, the researchers are trying to get to the bottom of factors that are known to put stress on potatoes and could be leading to lower yields as well. They’re looking particularly at foliage and stress indicators in terms of gene expression in potato foliage caused by drought stress and heat stress on the plants.

According to Tenuta, such stresses are thought to be more concerning in light of climate change.

“The idea is that if we get warmer temperatures, that might be impacting potato production. The potato plants respire a lot, and if it’s warmer we believe the plants are using energy that could go into bulking up the tubers,” he says. “We know soil moisture will be important. Therefore, the study also looks at warming temperature impacts across changing irrigation levels.”

Tenuta will take part in making Plexiglas greenhouses to elevate temperature and produce stress on potato plants, then take samples and have them analyzed.

This part of the research will have a long-term impact, Tenuta adds. “This way we can determine whether potatoes are getting stressed or not, and five or 10 years from now [we can] revisit it and see if they’ve become more stressed. It’s looking down the road at climate change responses, which is significant.”

The final goal is to come up with prescriptions to help growers determine what might work best in their particular fields to help boost yields and reduce variability in-field. Much of the work is being done right on growers’ land, which is a huge advantage for everyone involved, Tenuta adds.

“I’m hoping we can say to growers, ‘Your field is complex. There’s an assortment of areas that need to be managed.’ Compost might be warranted, maybe fumigation, and they may not have to treat the entire field. Some of these treatments are costly. If we can provide recommendations for certain portions of the field, I think we’re moving in the right direction.”

According to Hemphill, it’s not just potato yields that affect the Canadian potato export market, especially for french fries. Other factors come into play as well, but they’re not as easily influenced as the yield factor is. Seeing as the french fry sector buys almost half of Canadian potato production, it’s crucial all factors affecting Canada’s competitiveness be understood, Hemphill says.

Yves Leclerc, McCain’s director of agronomy for North America, agrees. “Seed quality always plays a role. We do have a challenge with that in some situations,” he says. “I don’t necessarily mean viruses, but the general vigour of the seed and its ability to grow in a predictive manner. We’re talking about physiology, diseases other than viruses, the storage and age of the seed.”

Despite it’s challenges, the potato industry continues to be important contributor to the Canadian economy. It generates over $1 billion at the farm gate and another $1 billion in exports every year, according to AAFC data, underscoring the importance of remaining competitive in the global marketplace.

The 2014 report “What’s Happening in Processed Food: Understanding Competitiveness in Selected Industries” published by the Canadian Agri-Food Policy Institute in co-operation with Agriculture and Agri-Food Canada notes that french fries are among the sectors experiencing a trade balance decline. The report states that Canadian french fry processors had annual trade surpluses that reached $856 million in 2004, before eroding competitive position over the next decade reduced the annual surplus to $773 million by 2013.

“No Small Potatoes: The Competitiveness of Canada’s Potato Supply Chains” is a 2013 report by the Conference Board of Canada that was commissioned by McCain Foods. The report, which reviewed historical yields in Western and Atlantic Canada and described the Atlantic Canada situation as being a threat to continued plant operation, was referenced by the New Brunswick and Manitoba scientists involved in the new research project.

By collectively working toward the same goal, I have no doubt we’ll be able to overcome our current issues.

According to Leclerc, the Conference Board report makes the case that steps must be taken to address the present situation where U.S.-based facilities are becoming more competitive and pushing Canadian companies out of markets. The report links a 10 per cent decrease in export volumes over a three-year period to U.S.-based facilities becoming more competitive than facilities operating in Canada. It also performs a landed cost analysis to show that processing plants in all regions of Canada are less competitive than American operations.

But there are some things working in Canada’s favour, like the Canadian dollar being significantly below par again.

“Now that it’s swinging at around 70 cents, that make us even more competitive, I think. But that’s only happened in the last six months or so,” Paget says.

Canada also enjoys the presence of a prolific plant breeding community that is always working to develop new varieties, Leclerc says. However, while new potato varieties are always in development, it can take years to bring a new one to market, he notes. “It’s a long process, and we still rely on older varieties for most of our production in Canada.”

The yield research study will be conducted over the next three years, and Leclerc is confident it will help reverse stagnating yields and get the Canadian processing sector back on track.

“By collectively working toward the same goal, I have no doubt we’ll be able to overcome our current issues,” he says. “The beauty of this is it’s a concerted effort by a lot of different groups aligned with the different priorities of the industry. Hopefully, we can determine the causal factors for yield decline and then introduce a remedy to improve soil productivity.”

Canadian Potato Acreage to Increase by 2.3 Per Cent: UPGC