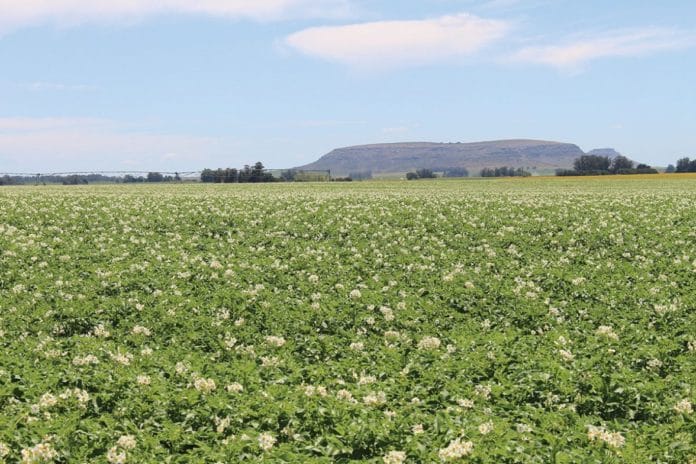 Some Canadian and American growers and McCain Foods executives travelled south to get a first-hand look at the country’s flourishing processing industry. What did they learn?

In terms of distance travelled, it certainly wasn’t your typical field trip — a round trip of some 20,000 kilometres to the opposite end of the globe.

That’s how far a group of 16 Canadian and American growers recently journeyed to observe how they grow processing potatoes in Argentina. The growers — 10 from New Brunswick and six from Maine — were accompanied by three Canadian and American executives from McCain Foods as they toured Argentinean potato farming and production facilities this past January.

The week-long visit took place in the Balcarce region of Argentina, the main processing potato growing area of the country that’s a five hour drive or so southeast of Buenos Aires. The group visited farms that supply potatoes for the McCain Argentina plant, which produces french fries largely destined for export to Brazil.

Finding a location where potatoes are grown in January was one of the reasons for the South American destination.

According to Yves Leclerc, McCain’s director of agronomy for North America, another compelling reason to visit Argentina was the interesting dynamic that characterizes potato production in that country.

“They’ve got a strong influence from Europe but they also have an influence from North America, so you see an area that has kind of merged the two influences in terms of technologies and also varieties and cultural practices,” says Leclerc, who took part in the trip.

Joe Brennan, a former chair of the both Potatoes New Brunswick and the Canadian Potato Council, also participated in the tour and spoke about it during a presentation at Manitoba Potato Production Days in late January just after the trip.

Brennan talked about Argentina’s huge land base for producing potatoes and the good growing conditions in the country, where yields are typically in the 500 hundredweight per acre range.

“The plant stands there were amazing. The cover on the fields was very even [and] emergence … seems to be a lot tighter there and more consistent than ours,” Brennan said.

Brennan commented that what really struck the North American growers was what their Argentinian counterparts are doing on the seed side. “I think they are ahead of us on that,” he noted. “They’re really focused on getting the best quality seed, and they’re really doing it well. That focus on the seed is a lesson that we have to keep in mind.”

Shawn Paget, a potato grower in Simons, N.B. and the current chairman of Potatoes New Brunswick, says he learned a lot from the trip. “There are a lot of techniques that they’re doing that are different, and I think could help us improve on some of our crops.”

Paget agrees that the importance of high quality seed was a key takeaway from the trip. Part of that message, he says, is ensuring good seed profiles (smaller and more uniformly sized) and proper seed maturity, since adequately aged seed results in more vigorous plants and consistent plant stands coming out of the ground.

“I think that’s an area we really have to work on. How to handle and condition that seed, so we have perfect stuff going into the ground,” Paget adds.

“For my own practice, I’m going to look for seed that is a smaller profile, maybe not all whole seed, but a smaller seed profile. That and a mature seed crop, that goes back to having a higher specific gravity and making sure that potato is physiologically aged. That’s basically what I’m going to be looking for as a process grower.”

Matt Griffeth, a processing potato farmer in Limestone, Maine, was one of the American producers on the trip. One thing he observed was that there appeared to be more earlier generation seed being used by Argentinean growers.

“I agree 100 per cent with their [use of] earlier generation of seed. I think there’s a lot of potential in our area for that.”

For Griffeth, another thing that stood from the trip was the abundance of land in Argentina. “There’s just so much potential for large-scale production agriculture in that country,” he says.

Paget was similarly impressed, pointing out that growers in Argentina have the luxury of being able to pick and choose the best land available for potato production. “A lot of their ground down there is rented every year so they’re able to pick prime fields all the time, whereas up here we don’t have that option,” he says.

Argentinean growers are even able to access virgin ground that has never grown potatoes before — something unheard of in the long-established farming areas in Maine and New Brunswick.

“The potential here of extending our acres is just not there,” Griffeth says. “I think we are pretty much utilizing all of our land, and we’re getting the most out of it that we possibly can at this point.”

Because of all that land, Argentinean growers also have the advantage of being able to utilize very long crop rotations — as much as one year of potatoes in a seven or even eight year rotation, in some instances.

All this isn’t to say there isn’t an area or two where North America producers may have an edge, according to the Canadian and American farmers on the trip.

“As far as their mechanical technology goes, I’d say they’re significantly behind us,” says Griffeth.

Paget maintains Canadian producers are able to put their potatoes in the ground much more quickly. For one thing, they don’t have to deal with the infrastructure issues that can slow down the movement of seed stock and fertilizer products in Argentina.

“That was one thing we did notice. They only average eight to 12 hectares a day with a four-row planter, and that’s a good day for them. Whereas here, we’re pounding the hectares in. I average I’d say between 25 and 30 hectares a day,” Paget says. He adds Argentinean growers also “struggle with more blight issues and insect problems.”

While some of the issues faced by growers in the different hemispheres are different, he says, there are similarities as well. For one thing, the cost of production appeared to be similar for the Argentinean and North American farmers.

“It was great to intermingle [with them] and get their information, and they asked us questions as well,” Paget says. “When it all boiled down to it, their margins are the same as ours, so it was interesting to learn that.”

Paget notes that precision ag tools like satellite imagery and drone technology are also being used fairly extensively in Argentina. “We saw two to three different growers using that,” he says. “I’d say they’re a little bit further ahead of us in the technology, or maybe about the same.”

Leclerc maintains Argentina’s forays into precision ag shows how the nation is committed to growing its processing potato industry, which is still quite new by North American standards.

“A lot of work is being done on the use of satellite imagery and also using drone technology to better grow the crop and improve productivity,” he says. “I think what we’ll see in the next few years is a real focus on fertigation [as well].”

Brennan also foresees good things in the future for growers in Argentina. “They’re doing a very good job there, and are on the verge of doing a much better job,” he added. “The potential is staggering.”

The Argentina trip was arranged in part through the Canadian Potato Transformation Initiative, a project aimed at increasing market competitiveness that was initiated last year by Agriculture and Agri-Food Canada, the N.B. Department of Agriculture, Potatoes New Brunswick and McCain Foods. Manitoba growers, through the Keystone Potato Producers Association, are now also involved in the project.

“If we look at potato [production] in Canada, we tend to fall on the lower end of productivity compared to other regions like the Pacific Northwest as well as in Europe. The idea is collectively put our efforts together to increase yield in our area and therefore be able to increase our competitiveness in a global market,” says Yves Leclerc, McCain’s director of agronomy for North America.

“The entire industry is working together toward a common goal,” he adds. “We’re really focusing on one aspect … and I think it’s going to pay dividends.”

According to Joe Brennan, another tour participant who spoke about the trip at Manitoba Potato Production Days, Argentinian potato producers are getting the same message as their Canadian counterparts about the need to reduce costs and increase yields in order to remain competitive in a tight global market.

“We always have to be looking at better ways of doing things,” Brennan said. “That same message is getting to them that we’re getting … and that isn’t going to change. The pressure to increase yields has never been greater, because guess what, someplace else always is.

“That’s one of the things that our growers felt when they got there — it’s not just us that’s under this pressure. It’s everywhere.”