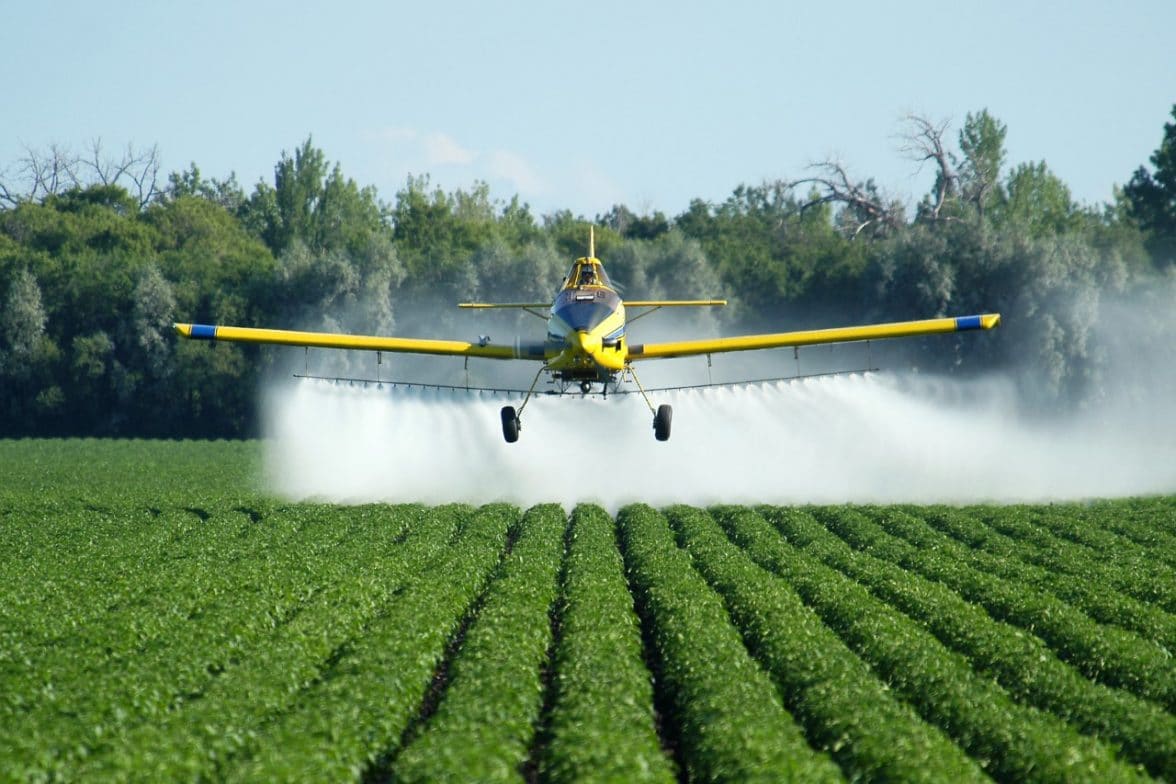 Mancozeb being applied aerially to a potato field in Manitoba. Photo: Jonair Ltd.

Currently under review, mancozeb is a potato industry staple for fighting late blight and early blight. Its proponents fear its loss would spell higher production costs for farmers and would remove a vital tool for managing disease resistance in potatoes.

Canadian potato farmers could be facing higher production costs with the potential loss of a key weapon against late blight.

Mancozeb is a relatively inexpensive, Group M fungicide that’s used extensively in Canada to combat late blight and early blight, with some growers applying the chemical up to 10 times per season on their potato fields.

The broad-spectrum fungicide is currently under review by Health Canada’s Pest Management Regulatory Agency due to concerns related to human health and environmental safety.

In June 2018, the PMRA completed a re-evaluation of mancozeb and ruled it unacceptable for agricultural use —with the exception of foliar applications in potato. Only a few months later, however, the agency changed its stance and proposed that all uses of mancozeb be cancelled, except for use on greenhouse tobacco.

Bryan Dion, who runs an aerial crop spraying service based in Portage la Prairie, Man., called Jonair Ltd., has been in discussion with a group called the Mancozeb Task Force, which has been advocating for the continued use of mancozeb in potatoes and a number of other crops.

“Mancozeb is a very valuable product for use on potatoes. It’s cost-effective, and there is no known resistance to mancozeb in the world right now,” says Dion, who estimates that mancozeb spraying accounts for roughly 40 per cent of his business.

“Mancozeb is a very valuable product for use on potatoes. It’s cost-effective, and there is no known resistance to mancozeb in the world right now.” Bryan Dion
Click To Tweet

Dion maintains it’s not only companies like his that would be hard hit by the loss of mancozeb. The impact on potato growers, he says, would be considerable.

“They’d have to switch chemistries, which will cost them 40 to 50 per cent more. It’d be a significant increase in cost of production for the farmers,” he says.

Chlorothalonil is another Group M fungicide registered for use in potatoes in Canada (others include metiram, captan and copper). It recently underwent a PMRA re-evaluation which resulted in the allowable number of applications being reduced from seven to three per season. Dion says product availability issues in the past two of three years have caused chlorothalonil to double in price.

Darin Gibson, president of the Manitoba-based potato and vegetable research firm, Gaia Consulting Ltd., says single-site products represent an alternative option for growers if mancozeb use is eliminated, but says they are significantly more expensive.

“Because of its long history, mancozeb has been used quite often and it is a very economic fungicide. If you take away that, there are other products available, but the costs will certainly go up,” he says.

“Because of its long history, mancozeb has been used quite often and it is a very economic fungicide. If you take away that, there are other products available, but the costs will certainly go up.” Vikram Bisht
Click To Tweet

Eugenia Banks, a potato specialist with the Ontario Potato Board, says those costs could rise “to what may prove to be unsustainable levels.”

Gibson maintains that cancelling mancozeb would also put Canadian potato producers at a disadvantage with their American counterparts, since the fungicide is permitted on potatoes in the United States.

“If growers in the U.S. have access to mancozeb products and the Canadian growers don’t, they’ll have much less expensive products they can use, which does give them a competitive advantage,” says Gibson.

“If growers in the U.S. have access to mancozeb products and the Canadian growers don’t, they’ll have much less expensive products they can use, which does give them a competitive advantage.” Darin Gibson
Click To Tweet

Banks agrees. “Cancelling mancozeb will put Canadian potato growers out of step with American growers. Canada would allow the import of potatoes treated with mancozeb while banning its use in Canada.”

Banks says this position is supported by the Ontario Fruit and Vegetable Growers’ Association, which outlined its concerns in a statement recently presented to PMRA.

The statement maintains cancelling mancozeb would significantly increase the cost of production, but “as Canada promotes open trade with global countries, Canadian growers cannot simply pass these costs through the supply chain. This unfairly advantages producers in the U.S. who would continue to be able to benefit from mancozeb’s unique qualities and cost-effective disease control.”

The statement adds that “ultimately, the removal of mancozeb from Canada, while allowing U.S. producers to continue its use on exported products to Canada, represents a very serious threat to Canada’s domestic food sovereignty.”

Banks says Ontario potato growers have indicated that removing mancozeb from their arsenal of tools to fight late blight and early blight would be “disastrous,” and they believe there is no robust scientific data to back up its cancellation.

Andre Gagnon, a communications advisor with Health Canada, says the PMRA re-issued a proposal in respect of mancozeb to allow for an informed consultation to take place.

“Although the previous consultation outlined dietary risks of concern, the associated risk management proposal, that is, the proposed regulatory decision, was inadvertently not included,” Gagnon says.

“The proposal should have stated, based on the dietary risk assessment, that all uses were proposed to be cancelled, rather than stating that certain uses were proposed for continued registration with further risk-reduction measures proposed. This could have resulted in PMRA not receiving some data and information related to mancozeb that could have been considered during the initial re-evaluation process.”

According to Gagnon, the Mancozeb Task Force was given until March 3 to gather and submit information to the PMRA related to current agricultural use practices, which included identifying and ranking the critical agricultural uses of mancozeb in collaboration with agricultural stakeholders.

The Mancozeb Task Force includes Corteva Agriscience, the agricultural division of DowDupont, and a spokesperson for Corteva says several hundred pages of scientific documentation were provided that support the continued use of the fungicide in potatoes, apples and some other specialty crops.

“We think we have very strong science arguments that support [mancozeb in] a number of crops in Canada, including potatoes,” says Brenda Harris, Regulatory Affairs Leader for Corteva Agriscience. “We think that mancozeb is an important part of Canadian potato production, that it’s safe when used according to label instructions, and it’s efficacious. And growers really need it.”

Since it was introduced in 1962, mancozeb has become one of the most important foliar disease management tools in potato. In addition to the prospect of higher production costs for farmers, many in the Canadian potato industry worry that eliminating the use of mancozeb would have a significant impact on resistance development in late blight and early blight pathogens.

Darin Gibson, president of Gaia Consulting Ltd., notes that fungicide products with single-site activity have a higher risk of disease resistance developing than a Group M fungicide like mancozeb.

Vikram Bisht, an industry development specialist, potato and horticultural crop pests, with ManitobaAgriculture, agrees. “Many single-site fungicides recommend that they be tank mixed with a multi-site action fungicide, like mancozeb, to reduce risk of resistance development in late blight and early blight pathogens. With potential loss of mancozeb and reduced usage of chlorothalonil, the tank-mixing strategy of resistance risk reduction will be in jeopardy,” he says.

Eugenia Banks, a potato specialist with the Ontario Potato Board, says disease resistance to mancozeb has never been reported during nearly six decades of use by growers of many crops, including potatoes.

Banks points out the global Fungicide Resistance Action Committee strongly cautions against restricting the use of multi-site fungicides like mancozeb since this “can result in faster development of resistant plant pathogens, resulting in increased epidemic disease development, major crop losses, and serious consequences for sustainable disease management.”