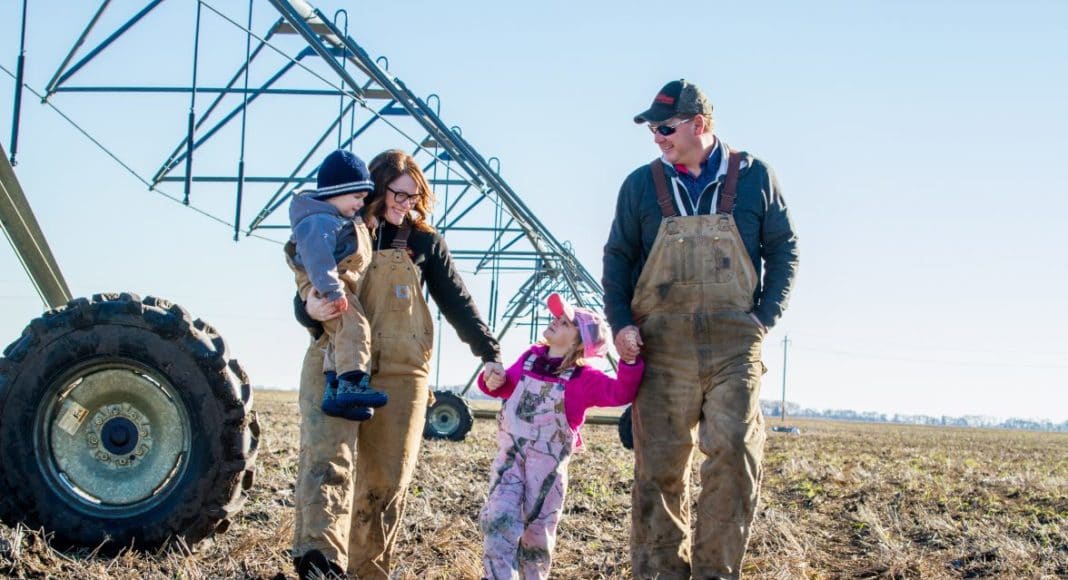 JASON KEHLER has been helping grow potatoes on the family farm in Carman, Man., since he was 12 years old. Some 30 years later, he can’t imagine doing anything else.

“I’ve always wanted to farm since I was probably old enough to say the word,” says Kehler, who’s a fourth-generation farmer and second-generation potato producer.

“I love what I do. I enjoy the challenge, the people, and just watching Mother Nature make things grow,” he adds. “I think it’s a pretty tough life to beat.”

“I love what I do. I enjoy the challenge, the people, and just watching Mother Nature make things grow.” Jason Kehler
Click To Tweet

Kehler and his wife, Laura, operate Kehler Farms Ltd., which encompasses 6,500 acres of farmland. That includes close to 1,200 acres of Russet Burbank potatoes the Kehlers produce each year for McCain Foods and Simplot. They also grow corn, wheat, oats, canola and edible beans.

Kehler, who calls himself a very hands-on farm manager, says he spends a lot of his time out in the fields. Laura is the office manager and she’s also kept very busy making meals for family and farm workers and taking care of the couple’s two children — seven-year-old Paisley and five-year-old Wyatt.

“Her contributions are vast,” says Kehler. 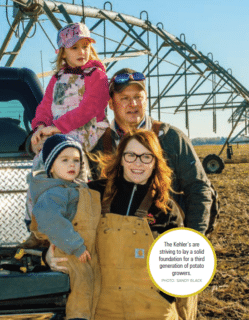 Eight to 10 people work at the farm year-round, with that number growing to about 25 at harvest time. Kehler says he and Laura recently hired a chief financial officer to share some of the management and administrative duties.

As the farm has become more profitable, it’s expanded in recent years, with the potato acres tripling in size since 2014. “We’ve gone from three circles to nine,” Kehler says.

The Kehlers consider themselves progressive growers and they’re always open to innovative technology and new ideas, like moving from 38-inch rows to 34-inch rows in their potato fields about four years ago. Kehler says it’s resulted in better yields and quality, and they’re looking to go to 30-inch rows in the future.

They were also the first in their area to adopt variable rate fertilization, which Kehler says has improved the quality and consistency of their potato crops. In addition, the farm has moved to centre pivot irrigation and every potato acre is now on drain tile.

“We really feel that we’ve advanced our growing technology on the farm,” Kehler says.

The Kehlers’ innovative efforts have not gone unnoticed. Two years ago, Kehler and his wife earned the title of Manitoba’s 2016 Outstanding Young Farmers.

“It was a great honour, not only for Laura and myself, but I really felt it was an honour bestowed upon our family farm,” Kehler says. “It was very much a generational effort. Yes, Laura and I were recognized, but [the award] was really a result of the efforts of my mom and dad and my grandma and grandpa and so on.”

Kehler says he and his wife have been striving to lay a solid foundation for what would be a third generation of potato growers, if their children decide to take up farming one day.

“When I’m in my 50s, I want to have a financially secure operation that my kids will have an opportunity to take over if they choose,” he says. “I don’t want them to farm if they don’t want to, but that’s my dream.”