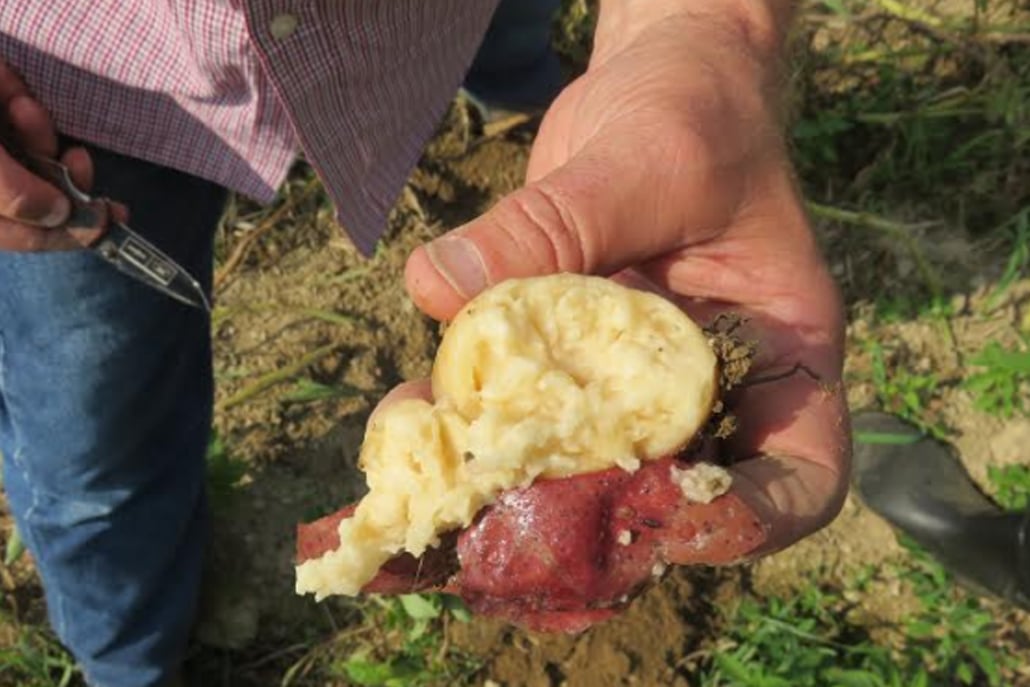 A potato in August 2015 infected with Dickeya dianthicola, a bacteria that causes the rotting disease blackleg. Photo: Steve Johnson.

Dickeya: A New Threat to Potato Production in North America

The main bacteria causing potato blackleg and tuber soft rot are Pectobacterium atrosepticum, P. carotovorum subsp. carotovorum, and Dickeya spp., all formerly belonging to the genus Erwinia. Dickeya and Pectobacterium affect a number of host species including potato, carrot, broccoli, corn, sunflower and parsnip, but they do not appear to thrive on legumes and small grains.

These bacteria characteristically produce a range of cell-wall-degrading enzymes that macerate plant tissues on which they nourish. The cell wall degrades, plant cells burst, nutrients leak, and tissues die and decay.

In 2015, a new blackleg pathogen emerged in the Eastern United States that caused significant losses in some potato producing areas. The pathogen was confirmed as Dickeya dianthicola, and there are concerns the disease could spread to Canada.

That’s because Dickeya can spread over long distances, and across national borders, in infected vegetative propagating material. Dickeya species were first reported on potatoes in the Netherlands in the 1970s and have since been detected in many other European countries.

Yield reductions of 20 to 25 per cent or higher resulting from Dickeya infections have been reported on various potato cultivars in Europe and the Middle East.

Prior to the Dickeya outbreak in the U.S. in 2015, it’s likely Dickeya was present in seed potatoes and farms in the affected states for at least a few years. Rain in 2013 and 2014 spread the pathogen, but cool temperatures caused latency. Warmer temperatures in 2015 on commercial farms resulted in significant outbreak.

Disease thresholds for Dickeya are not yet determined. The Maine Department of Agriculture, Conservation and Forestry’s Seed Potato Certification Program is proposing a regulation process in response to the Dickeya situation in Maine. It is likely that a new regulation pertaining to Dickeya in seed potatoes will be drafted to take effect in Maine next year.

Research is being carried in both Canada and the United States to learn more about the Dickeya pathogen, its presence in seed lots, how it spreads and survives, and how to properly manage it using seed certification, chemicals and cultural practices.

The most important means of dissemination for Dickeya and other bacterial pathogens of potato is the movement of latently infected seed tubers. The pathogen can be carried on the tuber surface and in lenticels (as for Pectobacterium spp.), but is also likely to be found in the tuber vascular system, which it enters systemically via the stolon from the infected mother plant or via root infection.

Although disease symptoms are often indistinguishable from those of the more established blackleg pathogen Pectobacterium spp., Dickeya spp. can initiate disease from lower inoculum levels, have a greater ability to spread through the plant’s vascular tissue, are considerably more aggressive, and have higher optimal temperatures for disease development.

However, they also appear to be less hardy than Pectobacterium spp. in soil and other environments outside the plant. Dickeya is not a good soil survivor (generally less than two years) and rotation out of potato for at least three years will greatly reduce the disease.

Generally, disease caused by Dickeya spp under warm, wet conditions leads to stem rotting with symptoms similar to those of P. atrosepticum. Under conditions with lower humidity, less rotting is observed with Dickeya spp but symptoms such as wilting, increased leaf desiccation, stem browning and hollowing of the stem can be present.

Symptoms of soft rot on potato tubers appear to be similar whether caused by Dickeya or Pectobacterium. Tuber soft rot ranges from a slight vascular discoloration to complete decay. Affected tuber tissue is cream to tan in colour and is soft and granular. Brown to black pigments often develop at the margins of decayed tissue. Lesions usually first develop in lenticels, at the site of stolon attachment or in wounds.

Recent studies showed that Dickeya spp., particularly at higher temperatures (27 C or above), cause more severe rots than P. atrosepticum and are more likely to produce a creamier, cheesy rot.

Dickeya dianthicol, the new blackleg pathogen recently confirmed in the United States, has the ability to remain dormant in tubers when temperatures are low (for example, at harvest time and in seed storages).

Tubers infected with this form of Dickeya look healthy at planting, but the disease develops when soil temperature increases. Seed tubers may rot in the soil, causing poor emergence, or infected plants may emerge that eventually die but not before spreading the disease to neighbouring plants.

Management challenges of both Pectobacterium and Dickeya include the lack of curative chemicals or resistant varieties, and the limited ability to predict the severity of the disease in the field. Growers are therefore advised to take precautions when acquiring seed potatoes in order to prevent the introduction and spread of Dickeya to their farms.

For one, it’s recommended that growers purchase and plant only certified Dickeya-free seed potatoes. It is extremely important that they request a laboratory testing confirmation from the seller showing that seed to be purchased was tested at a certified testing facility and found to be free from Dickeya.

Cutting seed will spread Pectobacterium and Dickeya within a seed lot. For this reason, growers should consider planting uncut seed when possible. If cutting seed, it’s important to ensure that the cut surfaces are suberized prior to planting to avoid new infections.

Dickeya may be managed through biosecurity measures and on-farm precautions such as decontamination of farm machinery, eliminating plant debris and alternative hosts, and avoidance of mechanical harvesting during the early phases of pre-basic seed tuber multiplication.

Growers should make sure to thoroughly sanitize seed cutting equipment and planter between seed lots. Seed should be warmed prior to planting so that it is approximately the same temperature as the soil, and to reduce water condensation on tubers. Bacteria cannot enter plant tissues unless there is a port of entry (for example, un-suberized cut surfaces of the seed tuber, or bruises) and a film of water or a wet surface.

At harvest, growers should reduce the chances of inflicting damage to the skin such as cuts and bruises. If soft rot is present in a portion of the field, this part of the field should not be harvested. In addition, harvesting equipment should be sanitized between lots.

Dickeya grows slowly or not at all at seed storage temperatures, so if the crop looks good going into storage, it will likely not decay in storage due to Dickeya, but the bacteria will likely cause disease and spread the next year if infected potatoes are planted.

Tissue culture plants are unlikely to survive if infected with Dickeya. However, tissue culture testing for soft rot pathogens is already a routine. Dickeya could spread in a greenhouse in nutrient film technique (NFT) or potting-soil based systems. Irrigation water can be tested for Dickeya to ensure freedom from the pathogen.

A potato plant with Dickeya-fueled blackleg, with a blackened stem and wilting leaves. Photo: Steve Johnson.

Wow! A new potato production challenge. Great article. We are consultants working with fresh chipping potato producers in Eastern North Carolina. I like the article and the preventative production checklist. There are certainly several procedural changes we could implement and some that we feasibly cannot. Can this bacteria be tested for at a private lab or University for varification? In the past we have worked with the identification of Late Blight Strains in Beltsville MD.

Both late blight and Pectobacterium are seedborne. Improved diagnostics would help reduce both diseases.