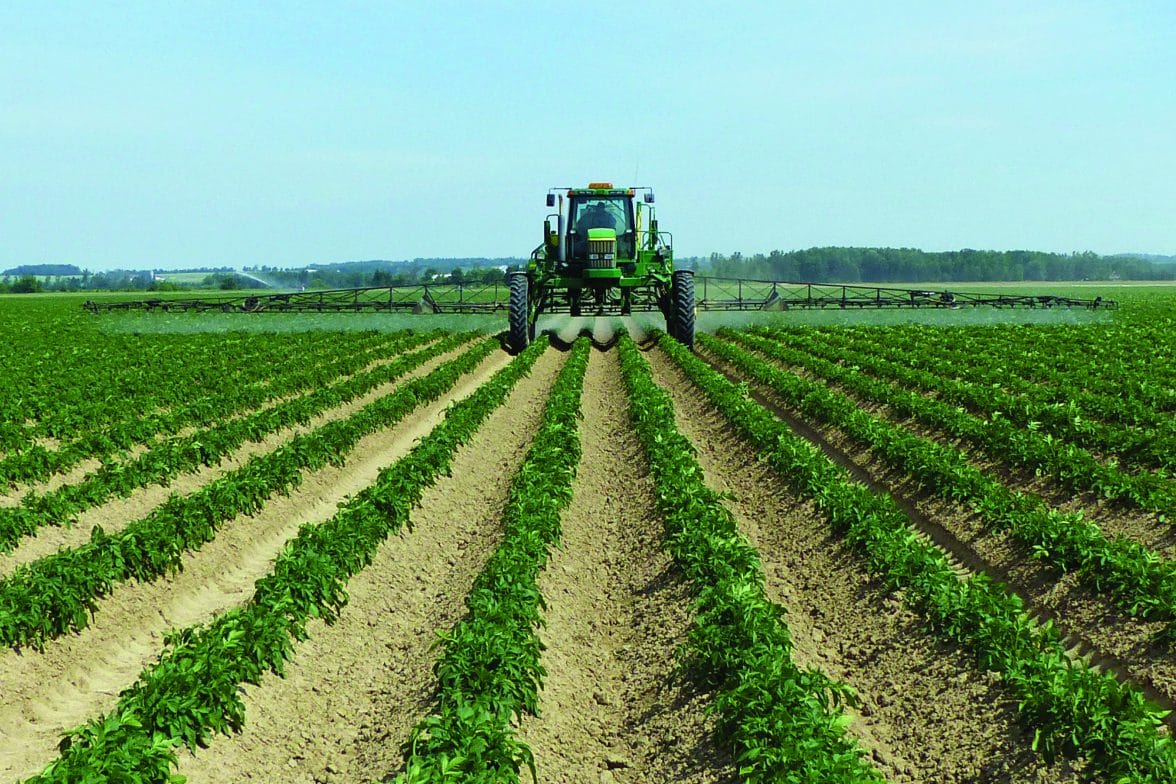 The PMRA is proposing to restrict some uses of the popular fungicide used to help fight late blight and other potato diseases. What does this mean for growers?

Eugenia Banks was the Potato Specialist with the Ontario Ministry of Agriculture, Food and Rural Affairs for 25 years. While with the ministry, she developed the Integrated Pest Management Program for Ontario, conducted on-farm research trials, and organized both the Ontario Potato Conference and the Ontario Potato Field Day. Her on-farm trials evaluated new potato varieties, new crop protection materials and new technologies. She focused on common scab, a worldwide problem in potato production. Following her retirement at the end of 2015, Banks continues to be involved with variety trials and technology-transfer activities.

On Feb. 11, 2016, Health Canada’s Pest Management Regulatory Agency published an amendment to the proposed re-evaluation decision for chlorothalonil (REV2016-06) that was first published in 2011. If adopted, the amendment will significantly restrict and in some instances remove certain uses for chlorothalonil, an active ingredient in pesticides widely used to control fungal diseases in not only potatoes but other crops as well.

This re-evaluation was a consultation process and stakeholders were encouraged to send their comments to PMRA within 60 days. The PMRA’s main concern for the proposed re-evaluation of chlorothalonil was worker safety, specifically health effects resulting from dermal exposure.

Craig Hunter, a pesticide expert with the Ontario Fruit and Vegetable Growers’ Association and a world authority on minor use of crop protection materials, spoke on the subject at the 2016 Ontario Potato Conference held in Guelph, Ont. in March.

In his presentation, Craig indicated that “ in 2011, PMRA had accepted a 21-day scientifically valid dermal toxicity study on the effects of chlorothalonil”. However, he maintained that “PMRA regulators are re-evaluating chlorothalonil using non-scientifically valid data, and that the agency did not ask the registrants for extra data such as 90-and 180-day dermal toxicity studies that could have provided this scientific data.”

Craig also argued that “the amended risk assessment that PMRA conducted included many assumptions on agronomic practices that are inaccurate and/or outdated, and are not indicative of how chlorothalonil is used in modern potato production.

“These assumptions led PMRA to inappropriate conclusions related to chlorothalonil use and occupational/worker exposure,” Craig continued, “resulting in the proposed limitation of one application on potatoes per season (down from the current limit of 12 applications per season).”

In the case of potatoes, the survey was sent to the provincial member organizations of the Canadian Potato Council, which then forwarded it to their grower members. According to Jones, “the response from potato growers was outstanding with more than 180 surveys returned.”

Growers returning the surveys represented about 30 per cent of the total 2015 potato acreage in Canada, Jones says, adding that “when crop consultant data was included this was about 36 per cent.”

Jones points out that “the purpose of this survey was to gather information on how the growers actually use chlorothalonil as part of their disease management system.”

The original comment period for the consultation was 60 days, which ended April 11. However, the CHC requested an extension of the consultation deadline and a 60-day extension was granted for all stakeholders until June 10. According to Jones, the CHC response to the proposed decision was submitted to the PMRA on June 10.

Bert Tupling, owner of Tupling Farms in Shelburne, Ont., operates one of Ontario’s largest potato farms along with his sons Andrew and Aaron. They are concerned that only one application of chlorothalonil during the growing season would have a negative impact on their Integrated Pest Management programs for their potato crop.

According to Tupling, “the farm’s first fungicide application that takes place before the potato row closure is with Bravo, one of the most widely used chlorothalonil-based fungicides.” He points out that “Bravo with its WeatherStik technology plays an important role in protecting potato plants against late blight. The fungicide will stick to the base of the plant, a late blight vulnerable area that must remain protected after rows close.”

Tupling is concerned that “only being able to apply Bravo once in June, will leave me without a cost-effective, multi-site protectant in July and August.” He considers that “Bravo tank mixed with targeted late blight fungicides is an excellent resistance management tool,” and Tupling maintains his spray program has kept his farm free of late blight for many years.

Tupling’s comments are echoed by Brad Dorsey from WH Dorsey Potatoes in Beeton, Ont. Dorsey uses chlorothalonil several times during each season, either alone or tank mixed with specific late blight fungicides as a resistance management tool. Like Tupling, he’s confident that “chlorothalonil has played an important role in keeping my fields free of late blight.”

Peter VanderZaag, an internationally renowned potato expert and potato breeder/grower from the Alliston area in Ontario, points out a number of important benefits of Bravo.

“Bravo doesn’t wash off plants easily. Not only is it an effective protectant fungicide, but the fungicide is at low risk of washing into water ways,” he says, adding that he’s not aware of a single case where an individual experienced illness by utilizing Bravo or even scouting fields after re- entry is permitted.

According to VanderZaag, “Bravo remains the most cost-effective fungicide for potato farmers after decades of prudent utilization. Its effectiveness has remained and has not changed, even with the changing strains of late blight.” He adds that “this late blight management tool is needed by Canadian potato growers if they want to remain competitive with their neighbours to the south.”

Keith Kuhl, who is president of the Canadian Horticultural Council, chair of Manitoba’s Peak of the Market, and CEO of Southern Potato Company in Winkler, Man., says that ”if the amended proposed re-evaluation decision was to be implemented, Canadian potato growers would be at a clear disadvantage in the North American marketplace.

Growers in the United States would be able to continue using chlorothalonil and continue exporting potatoes to Canada, he says, but the fungicide would essentially be no longer be available as an effective disease management tool to Canadian growers.

Zenaida Ganga, ‎potato scientist and research manager with Cavendish Farms in P.E.I., considers that “the impact of reducing the number of chlorothalonil sprays on potatoes from 12 to one per seasons will be detrimental to potato growers due to the important roles that this fungicide plays in potato production.

According to Ganga, chlorothalonil is effective on three important potato diseases that can start developing at different times during the growing season:

Zenaida maintains that “only one application of chlorothalonil per season would deprive potato growers of an excellent cost-effective fungicide and will result in poorer control of those three diseases.”

Tracy Shinners-Carnelley, director of research and quality enhancement for Peak of the Market, points out that “this amended decision on chlorothalonil has the potential to significantly change the potato grower approach to foliar disease management when taken in context with other pending re-evaluation decisions on the multi-site active ingredients mancozeb (PRVD 2013-01) and metiram (PRVD 2014-03).

“Without the ability to use multi-site products like these, the development of effective and sustainable approaches to foliar disease management will become much more technical and complicated for growers,” she adds.

Shinners-Carnelley says “it is important for growers and grower organizations to be engaged in the re-evaluation process. When proposed decisions are published, the comment period provides an opportunity to provide PMRA with current use pattern information, and other specific types of pesticide use information that can be critical input to revising the risk assessment, and increasing the chances of a positive outcome for the growers.”

Health Canada officials were asked to review the Curtailing Chlorothalonil article and comment on the industry concerns raised in the story. Here’s what Health Canada had to say:

“Before a pesticide is approved for use in Canada, it must undergo a thorough science-based risk assessment and meet strict health and environmental standards. All pesticide applicants must develop a comprehensive database of scientific information that demonstrates the product’s value and its effects on the environment and human health.

“Studies must be conducted according to internationally accepted guidelines following the principles of good laboratory practice and quality assurance programs to ensure the data is valid. Health Canada also receives the raw data, which allows its scientists to cross-check and validate the results. This practice is accepted worldwide and provides a stringent and effective means of assessing pesticides.

“Additionally, registered pesticides regularly undergo re-evaluation to ensure that they continue to meet modern standards for human health and environmental protection and provide value. Re-evaluations are based on a rigorous scientific assessment of available information, including data from registrations, published scientific reports and information from other regulatory agencies. On an ongoing basis, Health Canada reviews scientific studies and literature, as well as domestic and international health and safety data related to pesticides.

“Based on new scientific information, Health Canada recently revised its risk assessments for chlorothalonil and is proposing that certain agricultural uses be cancelled. Chlorothalonil is still an approved fungicide in Canada and Health Canada has maintained its support for some of the agricultural uses associated with this product where science has shown no risks of concern to health or the environment.

“For some agricultural uses of chlorothalonil, cancellations are being proposed due to potential health risks to workers from entering areas treated with chlorothalonil. Workers can be exposed to chlorothalonil through mixing, loading and/or applying the pesticide in agricultural or industrial settings, or while re-entering treated sites (for example, fields and greenhouses) to conduct post-application activities such as scouting and handling of treated crops.