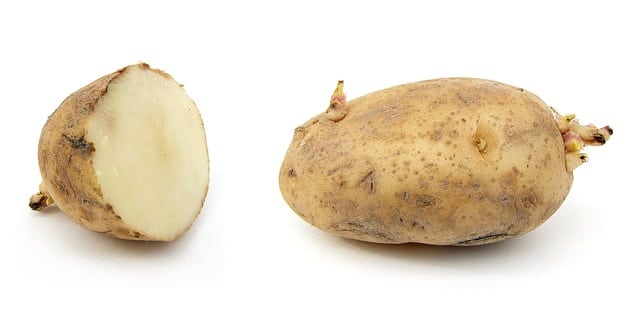 Chinese scientists have developed a nano-material that prevents the sprouting of potatoes.

This new anti-sprouting method for potato storage also suppresses the formation of toxic glyco-alkaloids that typically is associated with the sprouting process.

Stored potatoes usually sprout rapidly, at the same time producing a significant amount of solanine, a substance that is toxic in high concentrations.

Potato sprouting can be controlled using various techniques such as temperature control, irradiation and the use of chemical inhibitors.

Scientists from Hefei Institute of Physical Science under Chinese Academy of Sciences developed a new nanomaterial called hydrophobic nano silica that can be used to inhibit the growth of potato sprouts.

Hydrophobic nano silica (H-SiO2) was developed through the modification of nano silica by amino silicon oil (ASO) When potatoes were immersed in H-SiO2 ethanol solution, a hydrophobic coating was created on the surface of the potatoes, effectively inhibiting potato sprouts and decreasing solanine.

The material does not pass through the potato skin and can be washed off before cooking, greatly ensuring food safety. H-SiO2 also did not show any negative effect on the growth of cells, presenting a good biosafety.

The research provides a cost-effective and environmentally friendly approach for storing potatoes, according to the research team.

Interestingly, the researchers point out that this technology showed little negative effect on the sprouting of the potatoes when used as seeds in soil

The research was published online in the journal ACS Sustainable Chemistry & Engineering.

Commentary: How to Be a Mental Health Ally in Rural Areas