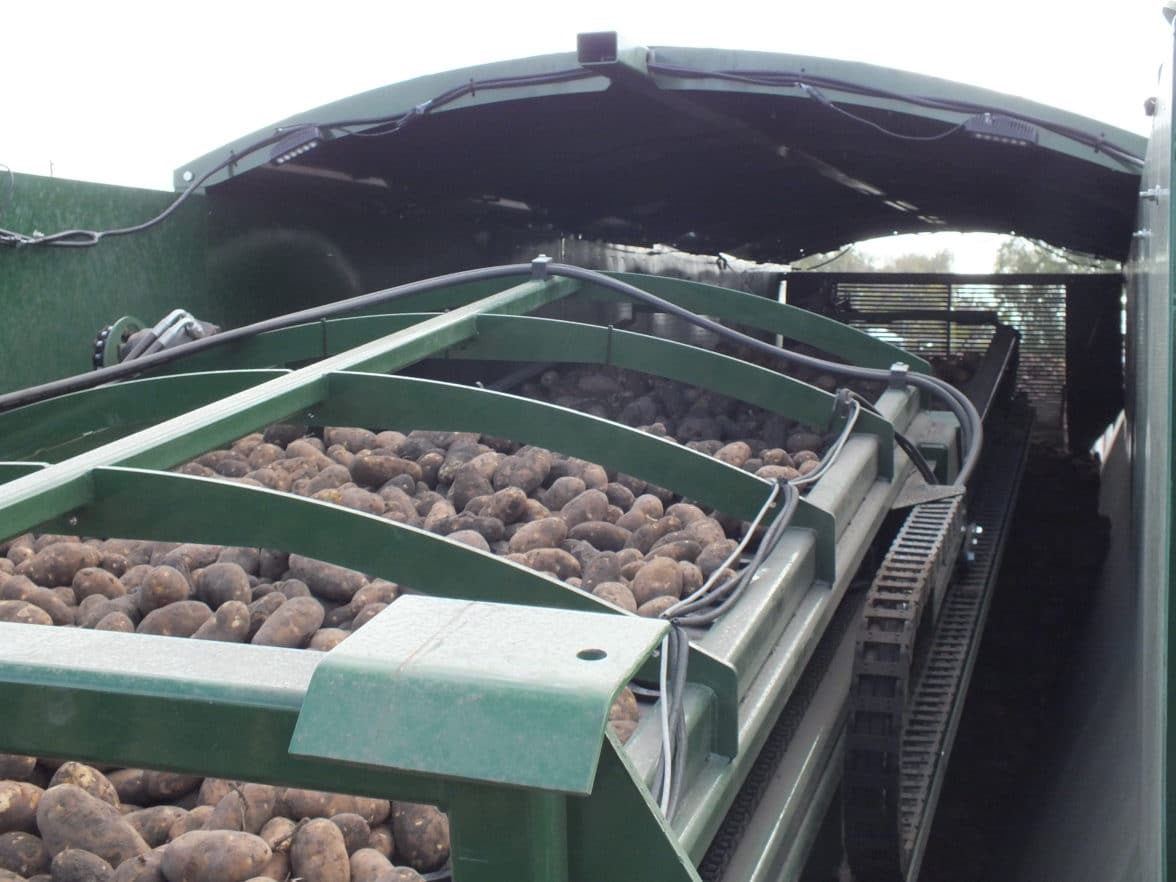 It’s believed the first potatoes to be grown for human consumption were produced in South America about 10,000 years ago.

The method used to grow tubers hasn’t changed much since then: plant, water, feed, weed and harvest. Thankfully for today’s potato growers though, the instruments used to plant, care for and harvest them have greatly evolved.

Spud Smart takes a look at some of the newest and most innovative tools available to potato growers and the potential they have to make operations both big and small more productive and profitable.

Harriston Industries’ Clamp Planter promises to make planting more accurate while at the same time speeding up the process. Seed potatoes are fed into a large bowl in the planter where they are then picked up by two rotating wheels and held in place with metal arms. The wheels drop the seed potatoes backwards at a low height, virtually eliminating any kind of roll back and skips common in most other planters. Global positioning system velocity sensors provide precise seed placement.

“We’re able to plant at much higher speeds than most other planters, about double the speed of a cup planter, and we’re able to maintain the same accuracy,” says Thomas Sitzer, a sales engineer with Minto, N.D.-based Harriston Industries.

Unlike pick planters, the Clamp Planter doesn’t need to puncture seed potatoes during planting and isn’t susceptible to any kind of rock damage. And despite all the moving parts, the clamp planter is almost maintenance-free, according to Sitzer. “You pretty much just have to wash them, put grease in them and store them,” he adds. The Clamp Planter has been available commercially for the past three seasons and the company has received positive feedback on it from growers in Western Canada and the northern United States.

Traditionally, most conveyors used to move potatoes have been flatbed systems. What makes the newly redesigned Bau-Man trough-style telescopic conveyor unique is how it’s been designed to move potatoes down the centre of the machine and away from the edges of the belt where dirt can accumulate and skin or bruise the spuds on flatbed-style conveyors. Although Winkler, Man.-based Bau-Man has been offering the trough-style conveyor for several years, it recently redesigned the system, which now comes in 42- and 48-inch widths. Sales Manager Gerald Bauman says it’s capable of handling the same capacity as conventional conveyors and its speed can be adjusted to match the speed of a grower’s existing system. A new modular design offers growers the opportunity to easily add new sections down the road if they require more length, he adds. 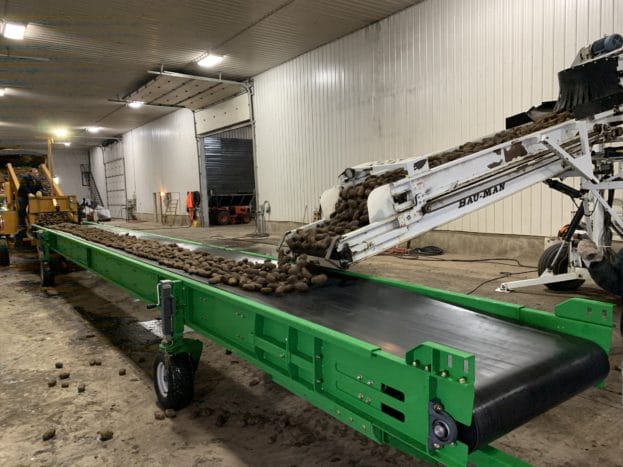 A new modular design for Bau-Man’s conveyor offers growers the opportunity to easily add new sections down the road if they require more length. Photo: Bau-Man

Bau-Man also recently redesigned its live bottom self-unloading potato floor insert system. It’s one-piece design easily slides into a trailer for hauling and unloading potatoes and can be quickly removed for cleaning. An 18-inch belt conveyor with pressure hood helps reduce some of the weight on the floor of the system and makes unloading far safer since there are no wooden planks needing to be removed by hand.

“That was one of the things we were trying to do with this version was make it safer, so no one had to be on top of the conveyor pulling out those boards,” Bauman says.

The insert’s framing is all aluminum and the unit is installed inside a fully insulated van trailer, meaning there is no risk of a load freezing during winter hauling. It comes in lengths to fit any size of trailer.

The latest addition to Elmira, Ont.-based Greentronics’s RiteTrace family of traceability products is a new cloud-based server for its RiteWeight in-line conveyor weighing system. The server allows any RiteWeight scale to connect with it and automatically transmit data to the cloud, which can then be remotely accessed from anywhere when users log in with their username and password. Reports and bin maps show how much product is being stored by date, field, variety and bin. The system can also offer a temperature profile of stored crops. The new system means growers no longer have to run around and gather information manually.

“With the server, growers don’t have to call three different people on the farm to find out what’s been happening in the last six hours. For example, they can look at a report or a map and see at any time how much product they’ve put in bin X from field Y so far that day. To be able to do that in near real-time is a big convenience,” says Bill Menkveld, vice-president of sales and marketing.

“It’s very handy to be able to pull down details at any time and print or share those with others on the farm. Completing some of the reporting for GAP gets easier as well.”

A handful of growers in Ontario, Quebec, New Brunswick and Idaho began using the cloud server for RiteWeight last season. Menkveld expects the number to rise as word of mouth about the system spreads.

Logan Farm Equipment’s Stac Pro Bin Piler was introduced a little more than a year ago, and is already garnering plenty of interest for its very high capacity and gentle handling. It’s available in a standard two-piece or bridge-style boom and comes in operating widths of 36, 42 and 48 inches.

Unlike some similar pilers, its longer length provides 53 feet of useable boom. Dave Gallant of Gallant Sales in Grande Pointe, Man. says the extra length of boom provides 70 feet of swing when it’s fully extended, which makes it much easier to reach into the front when loading trailers. 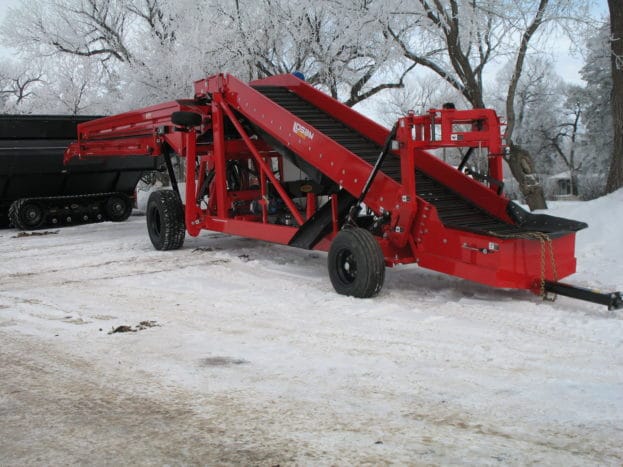 The Stac Pro Bin Piler weighs in at around 24,000 pounds and is much heavier and more stable and robust than other similar models on the market. Photo: Gallant Sales

At nearly 24,000 pounds, the Stac Pro Bin Piler is much heavier and more stable and robust than other similar models on the market. Logan has provided heavy-duty tires and heavy-duty  gear boxes for the wheels ensuring stability, and making it easier and safer to tow the unit down the highway. It also has a 4,000-pound sliding ballast which provides added stability when swinging the boom and reduces tongue weight during transportation.

The piler also comes with a full-function wireless remote and has an optional automatic speed control unit which senses the depth of potatoes, and automatically increases or decreases the speed of the elevator and boom belts. Gallant says this helps to keep potatoes at an optimal depth, and it minimizes roll back which can lead to bruising.

LOCKWOOD Manufacturing is adding to its product line in 2020 with the introduction of its Mobile TANK unit. The West Fargo, N.D.-based company boasts it is the industry’s most agile potato handling unit and exceeds industry standards in terms of transport and set-up times. It can be used with your existing cleaning line or in conjunction with the company’s VACS cleaning system.

The TANK’s discharge maximizes efficiency by utilizing a baffle to reduce pile roll and surging, which in turn helps to maintain a consistent flow into the cleaning elevator. It also features smaller rollers which help to reduce potato drop and minimize bruising and skinning.  It’s also been designed to move product continuously so some potatoes aren’t left in the back of the hopper all day. A steel roof helps protect potatoes from extremely hot or cold temperatures.

Dustin Heuer, a design engineer with the LOCKWOOD division of Crary Industries, says what really sets the Mobile TANK apart from the competition is its portability and ease of use.

“It’s extremely mobile and can go highway speeds. Plus, our set-up only takes one guy and it only takes half an hour. As far as I know most of our competitors require a couple of guys to set up their machines. That helps growers save time and money which I think is the whole goal of our Mobile product line,” he adds.

York, P.E.I.-based Allan Equipment Manufacturing is promising faster planting speeds and increased seed placement accuracy with its Press Wheel Kit for potato planters. The kit, which had been available locally for three years, was rolled out to a North America-wide audience last year.

The kit can be adapted to fit most existing potato planters and is remarkably simple in its design. Seed potatoes are fed from the planter down through a chute where they come in contact with a deflector system, sending the seed to a wheel, which gently locks the seed in place and virtually eliminates any seed roll. The system allows farmers to increase planting speeds by as much as 75 per cent (up to 5.5 or 6 m.p.h.) while boosting planting accuracy to more than 90 per cent. It works at all seed spacings and with all varieties.

“We have farmers who were planting at three miles per hour on eight-inch spacing to achieve 85 per cent accuracy. With the kit, they now easily plant at 4.5 m.p.h. at 90 or more per cent accuracy. The larger the spacing, the greater the gains,” says Allan Equipment Co-owner Trent Cousins.

The Press Wheel Kit was created by a local P.E.I. farmer who brought his idea to Allan Equipment to commercialize it. Cousins says the beauty of the system is its simplicity. It can be installed by a farmer in their own shop in matter of days. More than 60 planters with the kit were in use last year across North America.

“Those who have it love it,” Cousins says. “Anybody that has it sees immediate benefits.”

So maybe you can teach an old dog a new trick. Cancade CBI Ltd. has been around for about a century and has earned plenty of praise for its aluminum grain trailers. The company’s Brandon, Man. plant recently used that same design technology to a create new belt bottom aluminum trailer designed specifically for hauling potatoes. 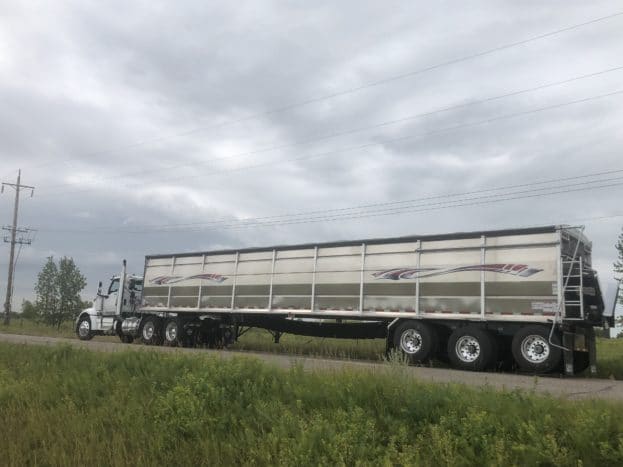 Cancade’s aluminum potato trailer can be used with either a tri-drive or tandem style truck. Photo: Cancade CBI Ltd.

The all-aluminum trailer is extremely lightweight and offers corrosion resistance most steel trailers simply can’t. It’s also a workhorse and can haul legal payloads of as much as 78,000 pounds with a tri-drive truck in Western Canada. Best of all, it can be used with either a tri-drive or tandem truck. It features a movable bulkhead and adjustable kingpin setting which allows the trailer to maintain optimum axle weights and payload positioning on either type of truck.

In addition, cushion straps attached to the trailer’s bulkhead help to protect potatoes when loading from over the top from the side while the end gates can be designed to accommodate rear loading. Its modular design also allows the trailer to be ordered in different lengths depending on a customer’s needs.