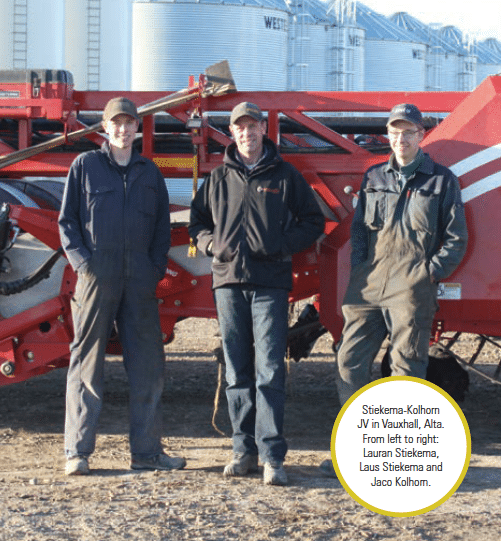 ALBERTA POTATO PRODUCER Laus Stiekema was in his early 40s when he decided to leave the Netherlands with his wife and four kids to start a new life on the Canadian prairies in 2004.

Fifteen years later, there’s no question that Stiekema and his family have landed on their feet.

“We’ve been in the top 10 a few times, but never number one,” says Stiekema. “We were very pleased.”

“That trophy goes into the coffee room,” he says. “All of our guys who work here, we congratulate them, too, because it’s their effort as well. We’re a pretty flat level organization and everybody does their part.”

Stiekema, who’s 58, comes from a long line of potato growers. He, his father and his granddad all grew potatoes and other vegetables in Holland.

“I come from a family that grew potatoes for a long, long time, just on a small scale,” he says. “Our family farm in the Netherlands was really small. We figured there was more space and more opportunity [in Canada] and that’s why we moved here.”

We believe healthy soils yield healthy crops, and because margins are getting slimmer, you can’t get by with deteriorating yields. You need to have a good crop.
Click To Tweet

The family tradition continues today, as Stiekema’s wife, Willy, their son Lauran, and their daughter, Pauline, and her husband, Jaco, all help run the farm. Stiekema and his wife have two other children who are not involved in the farm.

Stiekema acknowledges it was a hard thing to leave his family and friends in the Netherlands behind.

“You can’t deny if you’ve lived in the country for 40 years that you have roots there, so you have to find your new social network again. That’s an investment, but it’s also good and it’s an adventure, too, and that’s positive thing,” he says.

Stiekema says potato farming in Alberta is very different than it is in Holland due to different climates and other factors. Not long after arriving in Canada, he realized his best chance of success was to try to follow his neighbours.

“Basically, just looking across the fence line and seeing how they prepared the land and how they raised their crops, and over time we started to incorporate our own experiences and knowledge from across the pond. That way you get the best of both worlds,” Stiekema says.

“We usually grow grain on about 50 per cent of our acres. By trading land with our neighbours, we’re able to rotate our potatoes every six to eight years,” says Stiekema, adding that the farm’s other rotation crops include wheat, seed canola, seed alfalfa, sugar beets, corn and dry beans.

“We try to do a wide rotation in order to get the healthiest soil we possibly can,” says Stiekema. “We believe healthy soils yield healthy crops, and because margins are getting slimmer, you can’t get by with deteriorating yields. You need to have a good crop.”

Stiekema, who’s a past chairman of the Potato Growers of Alberta, is optimistic about the future of potatoes.

“Potatoes are a very healthy food, much healthier than people used to think. I think the world is starting to see that,” he says. “It’s a growing market, especially in developing countries, so I believe there will be a big need for potato products going forward.”

Changing Dynamics of the Canadian Potato Industry Over the Years

A Potato Farmer with No Land