Champion of the Industry 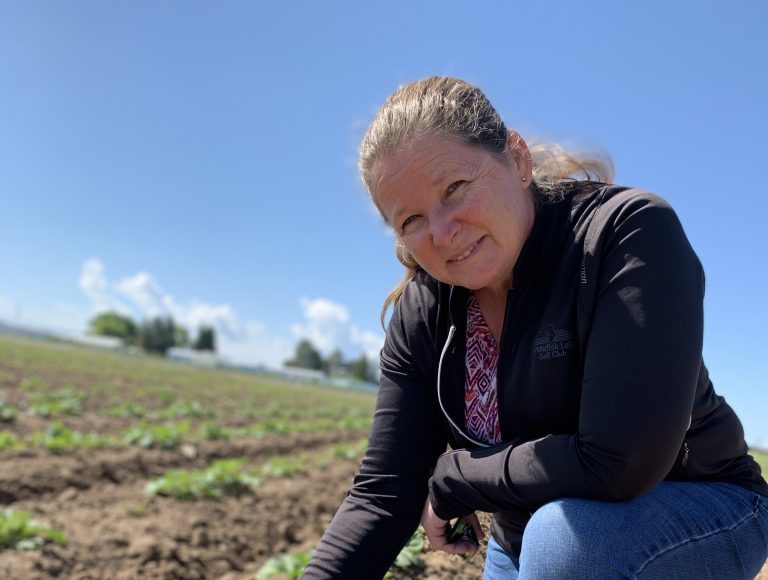 [deck]Nora Olsen is to be awarded the Potato Association of America’s highest honour at the 103rd Annual Meeting.[/deck]

Nora Olsen has a list. It’s a bucket list, of sorts, she has kept for the past 10 years of all the potato research she’d like to carry out. It’s no wonder that list is dwindling after the University of Idaho professor and extension potato specialist’s tireless efforts for the sector.

Olsen champions the potato industry and its stakeholders, especially growers, because she loves her work and feels honoured to be part of it.

“I feel so fortunate in my life and my career and being involved with the potato industry. Having the mentors and colleagues in the industry and the support I’ve had all these years — it’s remarkable. I don’t know if this happens to everybody,” she says. “I’m very proud of the industry and I appreciate every day I get to be part of it.”

Mentors such as Larry Hiller, Robert Thornton, Phil Nolte and Loretta Mikitzel shared their passion for potato science and production with Olsen early in her career.

“I was indoctrinated to the importance of the potato: the scientific aspects, the application and production, and just how important it is on a global level,” she says. “Potatoes are fascinating and complex and a constant challenge. Once you think you know something about a potato all of a sudden it responds differently.”

“Potatoes are fascinating and complex and a constant challenge. Once you think you know something about a potato all of a sudden it responds differently.” Nora Olsen
Click To Tweet

Olsen’s interest and passion for the industry began when she was a graduate student at the Potato Research Group at Washington State University. To date, she has carried out more than 400 extension and scientific presentations and authored or co-authored more than 320 scientific and extension deliverables.

“If you want to feed the world, this is such a nutritious part of our diet, and you can feel really good about that. I love its versatility, it’s fascinating biologically, and it’s so complex in terms of production. Once it’s in your blood, it’s hard to get it out. And the issues around potatoes keep changing, so you become part of the solution.”

Her entry into graduate work coincided with her brother’s beginnings as a potato producer. The timing was serendipitous: Olsen was able to integrate the practices and applications she was learning in her graduate program with what her brother was doing on the farm. “We were trying to use the science in the best way possible,” she says.

Her brother was in a position to provide her with a grower’s perspective, she adds. “He’d explain what I wanted him to do would take people, money and time. That humbled me and gave me a better understanding of how to make recommendations practical and how to prioritize within those recommendations.”

To this day, her interactions with growers and others from the sector’s production side are a large source of inspiration.

“I love working with our growers and agronomists. You help them on a daily basis and that drives you, and it’s also the challenge: any day you can get a phone call [about an issue]…. I love the flexibility and freedom I have to [think about] an issue and design projects, or education, or to do whatever we need to do to help.”

Olsen was hired by the University of Idaho in 1998 — after finishing her PhD in horticulture at Washington State University — and she’s been a potato specialist there for almost 21 years. She has been a member of the Potato Association of America (PAA) since she was in graduate school and has not missed a meeting in 23 years.

Olsen says the networking opportunities, support and mentorship she has gained as an association member have been important to her career. Recently, at an annual meeting she had an aha moment when she realized her role in the industry and the association had come full circle.

“I’m at the point where I get to nurture, mentor and encourage people in the industry. I’ve enjoyed keeping this industry going — its enthusiasm, love of potatoes, and passion,” she says.

“I’m at the point where I get to nurture, mentor and encourage people in the industry. I’ve enjoyed keeping this industry going — its enthusiasm, love of potatoes, and passion.” Nora Olsen
Click To Tweet

Her ability to create excitement about the industry and potato research as well as provide practical solutions for producers has been recognized many times by her peers and community. In 2013, Olsen and her colleagues were presented with PAA’s Outstanding Extension Project Award, for their efforts in 2011 to 2012.

During the PAA annual meeting this summer, Olsen will be presented with the Honorary Life Membership Award for her contributions to the industry and the organization. The award came as a big surprise, she says, adding she’s honoured to be a part of, and recognized by, the association.

“You can be very proud of this industry and you can feel good about what everybody’s doing and trying to achieve,” she says.

For almost 20 years, Olsen has held many offices as a member of PAA, including president from 2013 to 2014. She says she’s taken great pleasure serving the association and keeping the organization moving in the direction of its mission.

In addition, co-chairing the Local Arrangements Committee for the PAA annual meeting last year in Boise, Idaho, proved to be a highlight in her career. “It was a lot of work, but very rewarding, and it was a proud moment for all of us in Idaho to have PAA in Boise and to show off our state and to see the support for our industry. That was fantastic.”

As a director for the World Potato Congress, Olsen was able to further appreciate the potato’s global impact and the importance of international connections and exchange of knowledge, research and ideas.

“I’ve really valued that collegiality and collaboration, and the understanding that everyone working in the industry wants to do what’s best for it…. You feel like your world is filled with people you know and who you feel comfortable asking questions.”

It’s a small group nationally and internationally working on potato storage research. Olsen has enjoyed specializing in this area, which has included alternatives to sprout inhibitors, organics, and disease control options. She says on the surface, storage may appear straightforward, however, it’s anything but. This complexity is the crop’s draw for the potato scientist.

“You have air, humidity, temperature control and sprout inhibitors, but really it’s so complex. There are blanket recommendations, but when you get into the nitty-gritty, it’s such a case-by-case situation.”

Olsen isn’t worried about finding tasks to add to her 10-year list. At the moment, she’s working on quality in general, including processing quality, French fry colour and disease management. She’s also making a huge shift in focus to potato quality from a bruise and fresh market aspect.

“We’re looking at shatter bruise, blackspot bruise and pressure bruise and anything that would be detrimental to quality for a fresh consumer. For example, how do you set up the crop to be harvested, what happens at harvest, how do you manage the crop in storage. It’s been a very challenging project. We have a big, long checklist of things that can contribute to quality and we’re ticking off boxes to see how we can get more information to further maintain the quality we want.”

She’s also looking at research involving potatoes infected with certain viruses, such as Potato virus Y, tobacco rattle virus and potato mop-top virus, and how those diseases change product quality over time in storage. Additionally, Olsen would like to focus more on the relationship between agronomic practices and conditions in the field and how tubers respond in storage.

The topics and projects may be ambitious, but Olsen says there’s renewed enthusiasm for this area. Currently, the stage she’s at in her research epitomizes her reasons for being a scientist.

“We are in that fun, creative time in a project where we see new things occurring and we want to explore.”

Potato production also plays a large role in her leisure time. The eminent potato scientist loves to garden. This year she’s planted seven different potato varieties her family can harvest early. She also uses her garden as an outdoor classroom.

“It was nice for me to teach my kids from a young age about how to plant potatoes, how they grow, and that they need to smush all the Colorado potato beetles for me. It was important for me to integrate them into the potato world and gardening.”

It seems Olsen has done her job well passing on the potato’s value and versatility to the next generation. In June, her daughter participated in the National Speech and Debate Tournament in Dallas, Texas. Her topic: “The Eighth Wonder of the World — The Potato.”

The potato industry is viewing the latest PMRA decision as a good sign for growers. With major uses of clothianidin and thiamethoxam still available to...
Read more
People

Four potato growers from Prince Edward Island were honoured in March for their contributions to the industry over the years through the Potato Industry...
Read more
Disease Prevention

A ‘ban’ on the use of CIPC for potato growers in the EU has the potato industry on both sides of the pond concerned.When...
Read more