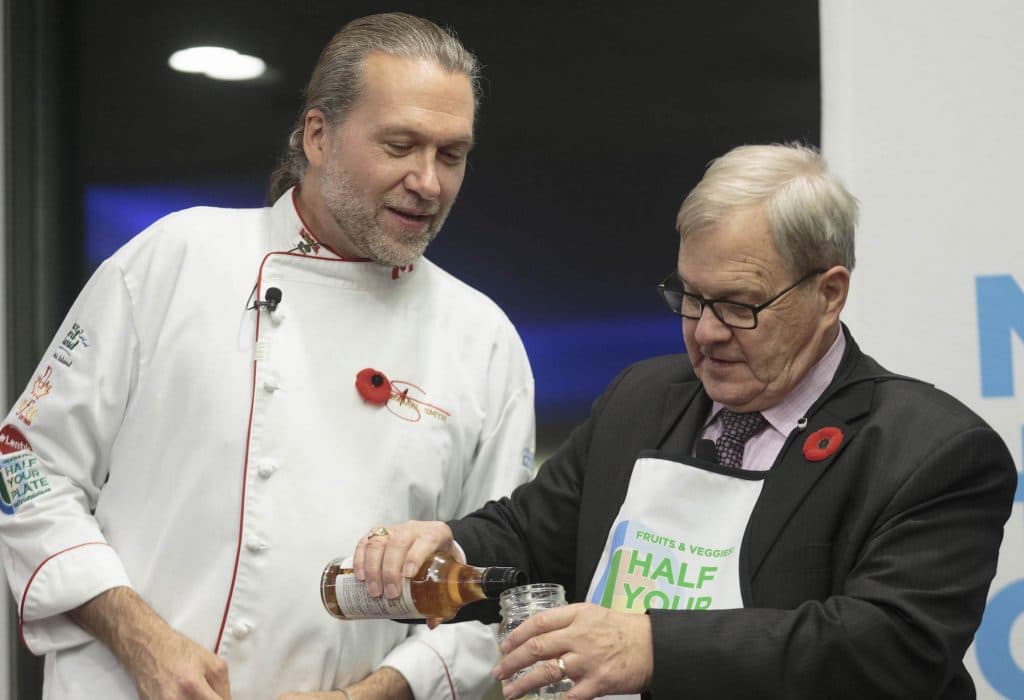 Lawrence MacAulay, Minister of Agriculture and Agri-Food (right), participated in a cooking demonstration led by Chef Michael Smith (left) at an event to raise awareness of issues in Canada’s fruit and vegetable industry.

Notably, CPMA and CHC representatives addressed the need for continued free and fair trade agreements with new and emerging markets to support industry, and advocated for the adoption of an integrated and collaborative approach to increasing fruit and vegetable consumption in a new Food Policy for Canada. Both issues are critical for the industry, and have severe implications on the cost and quality of produce, the health of Canadians, and Canada’s potential for economic growth, especially within the context of current NAFTA renegotiations. Industry representatives also discussed labour policy and the need for financial protection for produce sellers.

“The fresh fruit and vegetable industry plays a significant role in supporting Canada’s goals to provide safe, affordable, and accessible product year round. The produce supply chain had an estimated economic impact of $15.7 billion in real GDP and supported 181,566 jobs in 2016, all the while encouraging healthy eating habits,” states Rick Alcocer, CPMA Chair.

“Good health starts with what we put in our bodies, and we know that the healthiest foods are fruits and vegetables,” states Alvin Keenan, CHC President. “The federal government needs to assume a leadership role in offering accessible fruit and vegetable options to all Canadians, from coast to coast to coast.”

Following these productive meetings, CPMA and CHC hosted a reception featuring Half Your Plate Ambassador Chef Michael Smith. This well-attended event featured a food demonstration with Chef Michael and Minister of Agriculture and Agri-Food Lawrence MacAulay and provided representatives of the produce industry a more informal environment to network and cement relationships with Parliamentarians and their staff.

Produce growers and industry representatives from all over Canada participated in a workshop to prepare for meetings with over 50 parliamentarians.