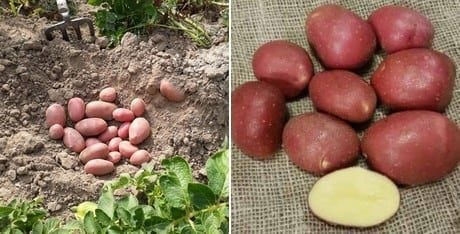 Breeding Company K.-H. Nütoff from Bütow will present a brand new, interesting potato variety at the upcoming Potato Europe in Bockerode. The potato is marketed under the name Macarena and was created for the food and export market. The medium-early potato (ready for harvest from mid-August) was newly registered this year, it is particularly storeable and has a red peel. The biggest advantage is that the variety works well in longer periods of dry and hot weather and still generates high yields, says a spokesman for the breeding company.

Outstanding heat tolerance
In March of this year, the variety was re-registered after many years of work. For more than 5 years, detailed trials were carried out in the potato stronghold of Lüneburg Heath and on the areas of seed farm Niehoff before it was actually ready to be registered for marketing. ”Due to the very high yields, especially on heavier soils, the predominantly firm variety is particularly well suited for the export market. It also has a very fine taste, a smooth peel and very flat eyes. With yellow insides and a good shell texture, it resembles the Laura, but is much more profitable.

In the course of this year’s summer weather extremes, the question became how the variety will behave in storage after difficult cultivation conditions. ”With this year’s drought, we have found that the Macarena is able to grow steadily even when heat stress persists. But although it can compensate for hot phases, we still recommend irrigating it.”

Nationwide cultivation attempts
The variety is not yet commercially grown, as it was only just registered in March of this year. However, experimentalists from various growing areas in Germany have already contacted each other and now the question of how the variety is to be maintained in the individual cultivation regions and their corresponding climatic conditions. It is already being promoted at packaging and peeling companies and at booth number G/B29 at the upcoming Potato Europe on 12 and 13 September.

Mecklenburg breeding facility
Since 1991, the Mecklenburg breeding facility Niehoff in Bütow has specialized in successful starch potato breeding, propagation and planting. The Bütow site offers excellent conditions for a successful propagation of healthy seed potatoes. Through close cooperation with European farms, successful varieties from the most important potato regions are available on the market. Currently, the breeding company is also trying to establish itself in the potato field with high-yield, high-quality potato varieties.