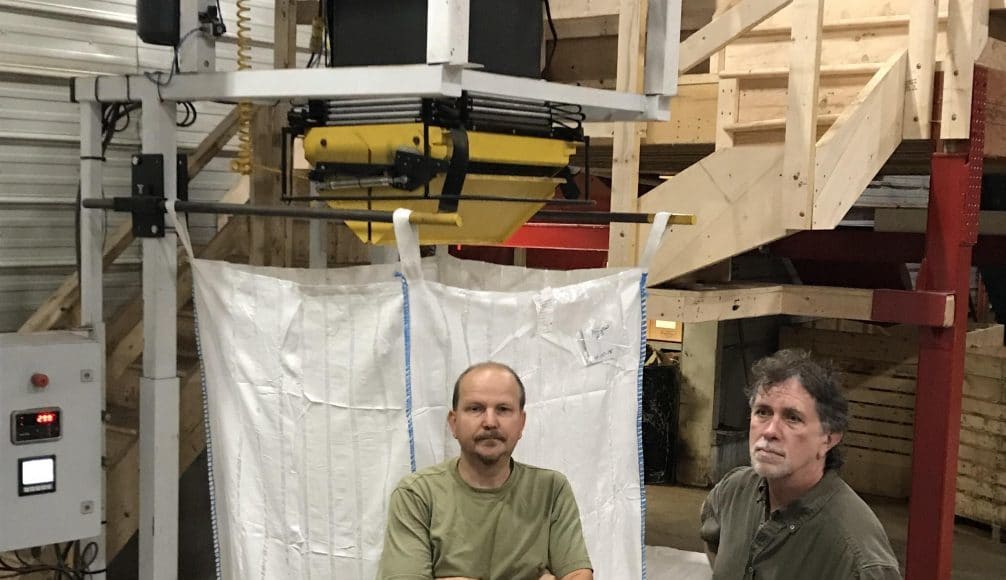 [deck]There’s a new way to ensure gentler handling of spuds, thanks to an innovative product invented by potato growers in P.E.I.[/deck]

Two years ago, Maritimer Pete Nieuwhof was contemplating ways to speed up packing of his farm’s fresh potato harvest. He found his answer with the EZ-Down, an ingenious device invented by a pair of fellow P.E.I. potato growers.

“At the time, we were looking for something to speed up our production a little bit. We had an old homemade machine on the line. It was working well, but we wanted to upgrade so we’d be able to pack more in the day,” says Nieuwhof, product manager and co-owner of Blue Bay Farms in Rustico, P.E.I.

“We looked at all the options and it just seemed that the EZ-Down was going to provide the highest production to cost ratio,” adds Nieuwhof, who paid a little under $30,000 for his EZ-Down machine.

Nieuwhof, who ships 4,000 to 5,000 tote bags full of yellow potatoes to re-packers in New England and Ontario each year, notes the capacity of his packing line jumped to 30,000 pounds of potatoes per hour with the addition of the EZ-Down.

“It’s not even going as fast as it can go, but we can do easily twice as much as what we could before,” he says. “This is much better than what we had.”

EZ-Down was devised by Randy Visser, general manager of Gerrit Visser and Sons, and Lloyd Martin, a long-time employee at the potato producing and packing operation located in Vernon Bridge, P.E.I.

Visser and Martin developed the first prototype as a way to reduce bruising on a packing line that was dropping potatoes several feet into tote bags and also to eliminate the hassle of having to stop the line every time a tote bag was switched out.

“Lloyd and I came up with the idea. Lloyd has been working for us for quite a few years and he’s like our mad scientist — he went back into the workshop and started slapping some things together, and he came up with a model to basically prove the concept,” says Visser. “It worked really well, so we got kind of excited about it.”

Visser notes that he and Martin have always enjoyed trying to devise better ways of doing things on the farm.

“We’re fairly experimental so we’ve definitely done some different things over the years, but this is really the only one where we’ve said, ‘this could be really valuable, and it’d be nice to have that offered out to the industry at large,’” Visser says.

“It’s a pretty unique concept. There’s nothing really like it out there that I’ve seen.”

Here’s how the EZ-Down works. The machine has a long chamber that gradually lowers as it fills with spuds from the packing line. When the chute reaches the bottom, exit doors are activated which enables the potatoes to flow gently out into a tote bag or pallet box. The chamber then moves up in small increments, creating a smooth flow of product.

When the tote bag or pallet box becomes full, it signals the bottom doors to close and the chamber retracts upward, and another cycle automatically starts again. In this way, the chamber acts as a buffer hopper, enabling an operator to switch out the tote bag or pallet box without interrupting the in-feed flow. In high volume situations, the EZ-Down automatically stops the in-feed conveyor until a new container is put in place.

Visser says there are other fall-breaking devices on the market that use a type of ladder system to provide some cushioning as spuds are dropped into tote bags, but he maintains they’re not as effective for reducing bruising and they also lack the EZ-Down’s unique buffer hopper feature.

The capacity of Nieuwhof’s packing line jumped to 30,000 pounds of potatoes per hour with the addition of the EZ-Down.
Click To Tweet
Visser notes another attractive feature of the EZ-Down is it doesn’t require a large footprint in the packing shed because of its vertical alignment. “It doesn’t need much floorspace to do the job,” he says.

Visser, Martin and a third partner, John Venema, decided five years ago to bet on their machine as a commercial product, forming a company called Ground Level Innovations to develop and market the EZ-Down.

The National Research Council of Canada kicked in seed money for the project, helping fund the process of turning the original proof-of-concept prototype used in Visser’s packing shed into a marketable model.

“We spent a lot of time in development and perfecting it,” notes Visser, who says there are currently three EZ-Down machines in operation at the Gerrit Visser and Sons farm.

Venema acknowledges the EZ-Down was over-engineered in order to produce a high-quality, durable machine that was 100 per cent reliable.

“We were continually refining it [and] that just took more time than we expected,” he says. “The concept was really simple but in order to make it work in all different kinds of conditions and with different kinds of potatoes, what we thought was going to take a year or so to develop the product actually took three years.”

Venema points out the EZ-Down system can pack table, processing and seed potatoes and can comfortably handle 40,000 pounds of spuds per hour.“You can fill a 2,500-pound tote bag in a little under three and a half minutes,” he says.

Now that Ground Level Innovations is producing commercial EZ-Down units at a manufacturing facility in Charlottetown, Visser says the company is exploring its marketing options and is also looking into possibly partnering with an established farm equipment dealer that could assist with product distribution and servicing.

“It takes some time to build integrity and respect and a reputation in the marketplace, so there might be some advantages to aligning ourselves with a well-known and trusted brand of equipment,” Visser says.

At this point, EZ-Down sales have been limited to P.E.I. but Venema and his partners believe there is strong potential for a North American-wide market as word gets out about their innovative product.

Visser states he’d love to see many potato packers as possible adopt the EZ-Down, and not just for business reasons. “We think it’s a really impressive tool for the industry to get to another level as far as gentler handling of potatoes,” he says.

Nieuwhof says he’d recommend EZ-Down to other potato farmers, particularly those looking to take steps to eliminate bruising on their packing lines.

“Not that we had issues with this before, but there was always that unknown,” he says. “You can’t really see inside a tote bag as it’s being filled, but with EZ-Down we know that every time it goes down the potatoes are falling gently on the bottom,” he says.

“It’s just a little bit more peace of mind that you never have to worry about bruising being an issue when our customers receive the product that we pack.”

Venema says the EZ-Down’s buffer hopper capability, which cuts down on downtime by enabling packing lines to run continuously, has turned out to be an even more attractive feature.

“At first, a key selling piece that was really important to us was the machine’s ability to handle the potatoes as gently as possible, but it turns out that for almost every one of our customers the biggest feature they like is that it has this built-in buffer hopper system,” Venema says.