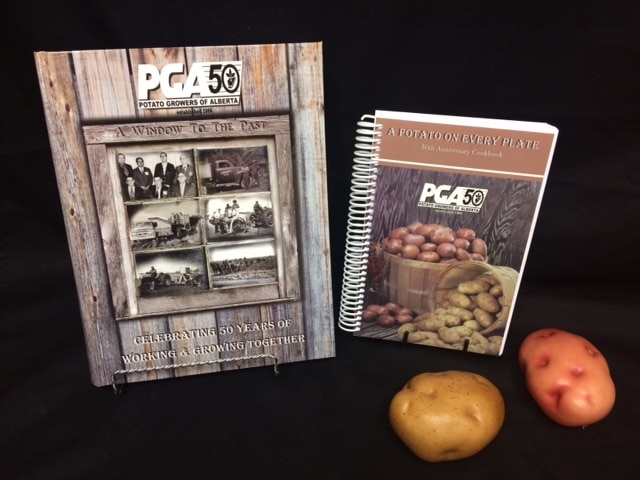 The history of the potato is a long and varied one. From the spud’s humble beginning in South America, to its current production throughout the world, potatoes are an integral part of almost every human being.

One provincial association has decided to bring the history of the potato in its province closer to home. The Potato Growers of Alberta (PGA) recently launched a book about the history of potatoes in Alberta.

According to the PGA’s Deb Brewin, the history book project began in mid-2015, one year prior to the association’s 50th anniversary, which took place in 2016. At the time, Brewin said staff began going through myriad boxes of material that were stored at the office’s headquarters in Taber, Alta. It was also decided the association would create a potato cookbook at the same time.

“Our goal was to have both books printed and ready for our annual meeting in November of 2016,” said Brewin. “However, deadlines were extended several times to ensure we had enough grower participation. And the more we dug, the more items we discovered and needed to include.”

The PGA’s 50th anniversary A Window To The Past history book and A Potato On Every Plate cookbook were slowly being born.

“Potatoes have been a crucial part of human survival for over a hundred years in this province. Potatoes were one of the most accessible vegetables back then and they were a staple for every family to feed,” says Brewin. “It’s important to know that our pioneers have worked very hard to bring a simple potato that was grown in almost every garden, to a $1 billion industry of value-added product grown right here in Alberta, impacting the provincial economy immensely. Our growers remain resilient and steadfast, continuing to produce a product in a very sustainable industry that will continue for generations to come. Many of our grower families are fourth generations, who are staying on the family farm and slowly taking over the reins.”

Brewin maintains Albertans should know where their food comes from and how it moves from the field to their plate. As such, the book goes back to the early 1900s when many Alberta potato farmers were developing their own implements from planting to harvest, and the process it took from each stage to get to its destination. Years of research were done to bring an every day vegetable to the highest standard for each sector of the seed, table and process market.

According to Brewin, the history book honours those humble pioneers and growers, board and staff members, industry representatives and researchers, who have and continue to spend their lifetime growing and developing an industry in Alberta that is credible worldwide, and that is productive, innovative and sustainable for many years to come.

“There are several grower stories – which is the heart of the book – that explain how and when their families began growing potatoes in Alberta… some from 1940 that were innovators and made their own implements and spent back-breaking hours doing manual labour to get their crops off. There are several statistics such as Alberta potato acreage and production from 1966 to 2016. There are lists of all the past and present staff and board members, including all the ‘licensed’ potato growers in Alberta from the past 50 years,” says Brewin. “The heart of the book is the submissions from former and current growers – the ‘grower stories’ – that puts into perspective the hard work these families endured throughout the years to raise a product and help develop an industry that remains successful.”

Brewin took the lead as contract history and archive technician to do the bulk of the researching and archiving and developing, and PGA staff Wendy McDonald Stolk also worked part time on the book alongside her regular office duties.

“The mountain of boxes in the back room were filled with news clippings, photos, meeting minutes, annual reports and so much more that required scanning and special filing into years and categories for preparation,” notes Brewin. “The compilation of material was a massive undertaking and we felt we had to include as much as possible, as this may be the only history book developed and we didn’t want to miss anything.”

The accompanying cookbook is comprised of potato recipes compiled by the PGA’s Cindy Fletcher who gathered them from former and current Alberta potato growers, staff, industry and some from previous cookbooks. There are 236 recipes included, which shows how versatile a potato can be for each meal and that will allow readers to utilize potatoes more often. With eight categories, from side dishes, breads, soups and stews, and even desserts, this book will be sure to please anyone wanting to try a new dish, says Brewin.

“Many of these recipes are family favourites that have been passed down from generation to generation. There is also a section at the beginning that talks about the health benefits, storing, and how to cook and prepare several varieties of potatoes,” she adds.

A group of Alberta potato growers sat on the history book committee, and they contributed vision, direction and their time editing hundreds of pages before the book went to press. One thousand history books and 1,500 cookbooks were printed, and are still available for purchase. For more information or to purchase a book, contact Brewin at deb.b@albertapotatoes.ca.