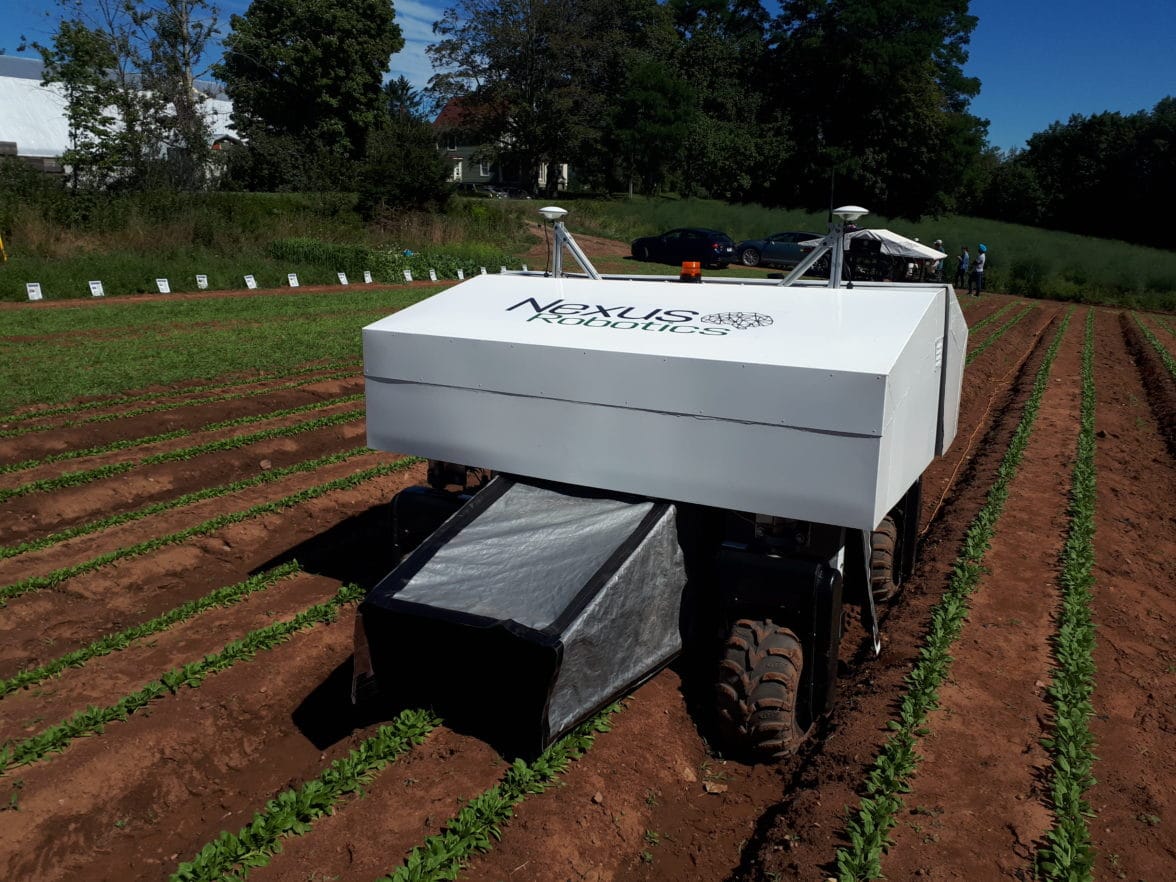 A New Way to Weed

Its name may be a playful pun, but the R2 Weed2 agricultural robot is no joke when it comes to plucking problem weeds.

So says Teric Greenan, a Nova Scotia vegetable grower turned high-tech entrepreneur who came up with the idea for the innovative robotic weeder, which could someday be used in commercial potato production.

“In 2015, I started a mixed vegetable farm in Lunenberg County, N.S., which I ran with a friend of mine for three years. In that time, I got to experience how much of a challenge weeding was and see just how much labour is required on farms,” Greenan says.

“I had quite a few friends studying engineering at the time, so I approached them about the potential of building a robot and that’s how [the R2 Weed2] came to be.”

In 2017, Greenan founded Nexus Robotics in Dartmouth, N.S., for the purpose of developing and commercializing the robot, which utilizes artificial intelligence and a cutting-edge machine vision system that enables it to autonomously navigate farmers’ fields and precisely target weeds without harming crops.

Greenan says a camera mounted on the front of the R2 Weed2 platform informs the system which plants are weeds. Those weeds are then pulled out with the weeder’s robotic arm and gripper. There’s also a camera attached to the robotic arm for increased precision, he adds.

According to Greenan, the R2 Weed2 is capable of removing weeds from multiple crops and is able to recognize those crops at different stages of their growth.

The battery-operated robot, which has a 1.5-metre square frame and wheels that can be adjusted to conform to common tractor wheelbases, can work 24/7 — something that not only speeds up weeding but also cuts down on labour costs.

Greenan says the robot is not only capable of weeding at night but it’s actually easier for its vision system to operate in conditions when the only light is being produced by the machine itself. He adds the R2 Weed2’s vision system is also better than the human eye at detecting tiny weeds just emerging from the soil. 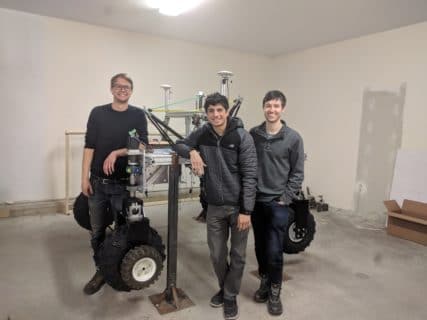 “There’s an added benefit on the herbicide resistance front because with our solution we’re not using herbicides, but actually pulling the weeds out of the ground, which will eliminate any herbicide-resistant weeds that remain in the field. I think that could help farmers who have herbicide resistance issues,” he says.

Greenan points out herbicide resistance is a growing problem for potato producers in many parts of the country.

“I think that’s going to present a really big challenge [going forward],” he says. “I believe a technology like this, that could decimate the herbicide-resistant weed populations, would be a huge step forward for the potato industry.”

Greenan says Jad Tawil, the company’s chief technology officer, developed the software for the robotic control system and the robot itself was put together by Nexus Robotics’ lead mechanical engineer, Marlon Wauchope.

Greenan, who was invited to discuss the benefits of the R2 Weed2 robot with farmers at the Ontario Potato Conference in Guelph, Ont., in 2018, says the first version of the weeder turned some heads — and impressed the judges — at an international agricultural robotics competition called the agBOT challenge in Rockville, Ind., two years ago.

Facing tough competition from U.S. universities, Greenan and his team managed to take home first prize in the Weed and Feed category.

“We went there with very low expectations,” says Greenan. “We actually had a team meeting a few days before we were planning to leave and talked about whether it was actually worth it for us to drive all the way to Indiana. We decided that even if we didn’t do very well at the competition, it’d still be a worthwhile learning experience.”

Greenan believes one reason his robot took top honours at the agBOT challenge was it didn’t resemble anything else in the competition, which was largely comprised of high-tech weeding implements that utilized sensors to perform spot or variable rate herbicide applications.

“I think the judges really liked how innovative our robot was, and they could see the ideas we had were very unique and applicable to what they would like to see with weeding,” says Greenan.

William Spurr is field manager for Spurr Brothers Farms in Kingston, N.S, which grows potatoes and a number of other crops. Spurr really likes the idea of a robotic weeder.

“I think that it would help out potato production a lot,” he says. “The biggest thing we grow are Superior potatoes, but there are a lot of herbicides that say right on the labels do not use for that variety.”

Spurr points out because herbicide applications in potatoes are weather-dependent, farmers often have to cope with rain delays when spraying.

“If you can’t get in the field, then you can’t get that herbicide on, and so sometimes, you’ll miss that [herbicide application] window. It would be nice to have something you can put out to weed your fields, day or night, and it just does the job for you,” says Spurr.

“Herbicides are expensive. You have to go in a few times, and now it’s not just one herbicide that can be used for every weed. You have to spray for broadleaf weeds and you also have to spray for grasses. If there was something you can put in there that just takes everything out robotically, it’d be perfect,” he adds.

Andrew McKenzie-Gopsill, an Agriculture and Agri-Food Canada weed scientist based in Charlottetown, P.E.I., believes autonomous machines like the R2 Weed2 robot that offer a more targeted approach to weed management is where the ag industry is headed in Canada.

“I think there’s a lot of potential there, especially as we want to try and reduce pesticide usage, and in light of the herbicide resistance issues that we’re facing,” he says.

According to Greenan, Nexus Robotics is making good progress toward its goal of commercializing its robotic weeder by 2021.

This past summer, the R2 Weed2 prototype was trialed at Elmridge Farm in Centreville, N.S. The robot achieved a field accuracy of close to 90 per cent when tested on a number of vegetable crops.

Greenan says the Nexus Robotics’ team continues to make improvements and is working toward having a second version of the R2 Weed2 robot ready for field testing this summer.

According to Greenan, this new prototype, which will feature an additional robotic arm he says should enable it to weed twice as fast, will likely be trialed on farmland somewhere in the Holland Marsh agricultural area near Toronto, Ont.

“There’s a huge amount of vegetable production [in the Holland Marsh region] and it’s really well suited for the technology that we’re developing. Farmers there also have a lot of challenges with herbicide-resistant weeds,” Greenan says, adding there’s a possibility potato plots will be included in the R2 Weed2 testing this year.

Nexus Robotics’ commercialization strategy for R2 Weed2 is to start with a weeding service it can offer to farmers by 2021. Greenan says the company is currently seeking out investors for a seed financing round that would enable Nexus to build a few more robots to have ready for the weeding service launch next year.

Greenan believes the R2 Weed2 could play a big part in integrated pest management in the future, and he says a long-term goal for the Nexus Robotics’ team is to design a robot that not only detects crop diseases and problem insects, but also assesses soil fertility and moisture conditions in the field.

“We plan on trying to integrate whatever technology we can in terms of sensors on to the robot to collect the best data for the farmer that we can,” he says.

Greenan sees a day when ag robots like his are a common sight in farmers’ fields.

We would like to buy one and try it out. We grow and retail 40 different crops in port elgin Ontario.
What is this robot going to cost.