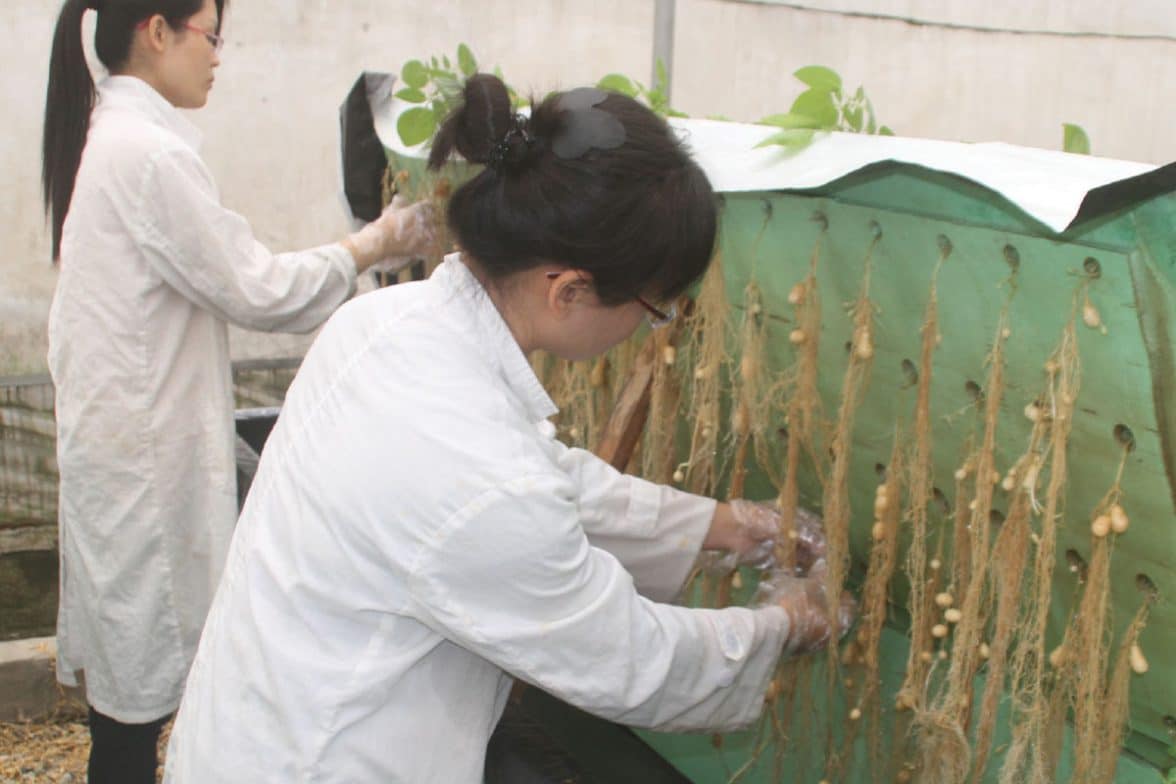 Aeroponically grown seed potatoes being harvested at the Sichuan Academy of Agricultural Sciences in Chengdu, China.

A New Way to Grow

Could aeroponic seed potato production be the way of the future in Canada? Researchers are working to figure that out.

Canadian researchers are experimenting with a new method of growing seed potatoes, and the results look promising. Scientists at the Alberta Agriculture and Rural Development Crop Diversification Centre say aeroponic potato production — which essentially involves growing potatoes in air, rather than soil — has the potential to revolutionize how seed potatoes are grown in Canada.

Potato research scientist Michele Konschuh, based in Brooks, Alta., is leading the evaluation of a commercial aeroponic production system for seed potatoes. The technology being studied is the Vital Farms Potato Incubator PIP-200, an aeroponic seed potato production system from NorthBright Technologies in Chicago designed to optimize the yield and quality of seed potato mini-tubers.

The potatoes — Konschuh and her team are harvesting their fourth round of tubers from their greenhouse —are grown suspended in air and fed through misting. She hopes the technology will allow researchers to grow significantly more seed potatoes per plant than is currently possible using traditional greenhouse methods.

“In a regular greenhouse, we get an average of one to five tubers per plant in potting mix. In the aeroponic system, we’re aiming to get 10 times more than that,” she says. “Right now, I think 10 to 20 is realistic here. We’ve seen as high as 17 tubers per plant on some of the varieties we’ve grown.”

That’s significant, Konschuh says, noting that the ability to use aeroponics to produce 10 times more seed potatoes than traditional greenhouse methods would serve to make Canada more competitive in the seed potato market.

“I think there’s a lot of potential for aeroponics in Canada, because we need to increase our productivity. We’ve got our cost of production as low as we can go with the methods we’re using now, and we’re not keeping pace with import material,” she says. “We need to make sure we have a value chain here that’s healthy and strong, and everyone in the value chain has to be able to make a profit. We feel this might be a way to do it.”

Canada is a late arrival on the aeroponic potato production scene, notes Canadian potato grower Peter VanderZaag of Ontario’s Sunrise Potato Storage. VanderZaag serves on the board of trustees of the International Potato Center (CIP), whose mission is to work with global partners to achieve food security, well-being, and gender equity in root and tuber farming and food systems in the developing world.

VanderZaag used to work as a CIP scientist and university professor in Asia. One of his former graduate students, He Wei, led a Chinese project that used aeroponic technology to grow mini-tubers after a devastating earthquake in China’s Sichuan province in 2008.

VanderZaag says after earthquake, there was an impetus to implement aeroponic potato production on a large scale — the World Bank gave funding to Chinese authorities and CIP to begin large-scale research production of potatoes aeroponically to help those who had lost everything in the earthquake.

That research continues to be carried out at the Sichuan Academy of Agricultural Sciences as well as by farmers in private greenhouses in China, and it has yielded some impressive results. A research paper co-authored by VanderZaag, He Wei and K.Y. Xie, Experience with aeroponics for pre-basic seed potato production in Sichuan, China, refers to tuber production as high as 75 tubers per plant, depending on the variety.

I think there’s a lot of potential for aeroponics in Canada, because we need to increase our productivity. We’ve got our cost of production as low as we can go with the methods we’re using now.

“This has been an amazing story, where this start money to get this onto a commercial scale has taken off. In Sichuan, this is done on a huge scale, producing basic seed through aeroponics,” VanderZaag says. “The beauty is there are no diseases that can be carried by the seed tubers from generation to generation. There’s no bacteria or other pathogens that can infect the tubers. When you grow them in soil that’s a problem, but with aeroponics it isn’t. You can control the conditions perfectly. With misting, you get a very high yield.”

Prior to its use in China, growers in South Korea began growing mini-tubers aeroponically in the 1990s. It’s been used in Vietnam as well. “NASA, back in the 1980s, wanted to have people living on Mars and the moon. Their research focused on how can we get plants to grow in air,” VanderZaag says. “This translated into many scientists thinking about how they could apply this to growing plants here on Earth, where we have to deal with pathogens which are detrimental to many crops, including potatoes.”

It’s not just the elimination of pathogens that makes aeroponics ideal for potato growing, Konschuh notes. “Because aeroponics actually allows us to harvest above ground and not below ground, you can actually see the tubers form, and you can pick them when they’re the right size. If they’re buried in potting mix, you kind of have to take your chances until the end of the year, and if you go rooting around in there ahead of time, you’re likely to damage roots or the plant,” she says. “The main objective of aeroponics, in my view, isn’t so much to avoid using soil, but to try and get tubers of exactly the right size and a continuous harvest.”

Using aeroponics to produce tubers of the same size is the reason many growers around the world are adopting this new technology. Konschuh and her team have received helpful advice on using the PIP-200 from Hilko Bos, a Dutch grower who helped develop the technology. He began using aeroponics after tiring of what he says was the inconsistent quality he was getting in seed tubers purchased from premium seed potato producers in the Netherlands.

“We were often disappointed with the seed tubers we bought. We wanted to have healthy seed potatoes and reduce the number of field generations. Therefore, we produce mini-tubers in the greenhouse and afterwards we only have three field generations so diseases will not build up,” Bos says. It’s also economical, he adds. “Here in the Netherlands, it’s about 45 Eurocents  (almost 70 cents in Canadian currency) per seed potato if you buy from a large producer. If you need a couple hundred thousand mini-tubers, you have to spend about 70,000 euros per year for them all. We started to look at different ways we could do it by ourselves.”

The beauty is there are no diseases that can be carried by the seed tubers from generation to generation. There’s no bacteria or other pathogens that can infect the tubers. When you grow them in soil that’s a problem, but with aeroponics it isn’t.

Bos has had success with the PIP-100 (an earlier version of the PIP-200), hitting yield levels of more than 40 tubers per plant. Those yield levels are due in part to the ideal climate that exists in the Netherlands and some of the specific varieties Bos grows, but a lot of hard work and trial and error has gone into it, as well.

“In the beginning we had to learn about proper nutrition, moisture, all those factors,” he says. “You have to have some knowledge about that to get a decent yield. There are always possible improvements you can make. We’re very happy with how it is going right now.”

Canada and the Netherlands are, of course, half a world apart. What works for growers in Europe is not necessarily going to work in Canada, and Konschuh has discovered that for herself. “We have different growing conditions in Canada, and we don’t grow the same varieties they do there, so I’m not sure the levels they’re seeing in the Netherlands are attainable here,” she says.

“We’re finding that in the greenhouse, you need to know more about what you’re doing without Mother Nature helping you as much. You don’t get air exchange with wind. We’re finding that maybe we need to supplement the CO2 in the greenhouse, or bring in fresh air in the winter since we’re not venting to the outside like we would in a field setting. It’s a learning process, that’s for sure.”

While such technical challenges do pose a potential stumbling block for growers looking to adopt aeroponic technology, VanderZaag notes that having almost total control over growing conditions is a major benefit of the technology. The major challenge, in his view, is to make aeroponics commercially viable in Canada. “It isn’t for the small person — it’s for [larger producers] to do,” he says. “It really comes down to whether it makes economic sense and farmers begin to say yes to it.”

The economic viability of the PIP-200 is something Konschuh and her team are evaluating — it was brought to Brooks to be evaluated at the request of the Potato Growers of Alberta. “The economic threshold for us is likely 15 to 22 tubers per plant. If we can beat that, the system makes financial sense. If not, we recommend growers look at alternative systems, but there are none commercially available that I’m aware of,” she says.

There are a lot of generic plans online so people can develop their own aeroponic systems for potatoes, Konschuh adds.

I wish to have a Potato Aeroponics in India