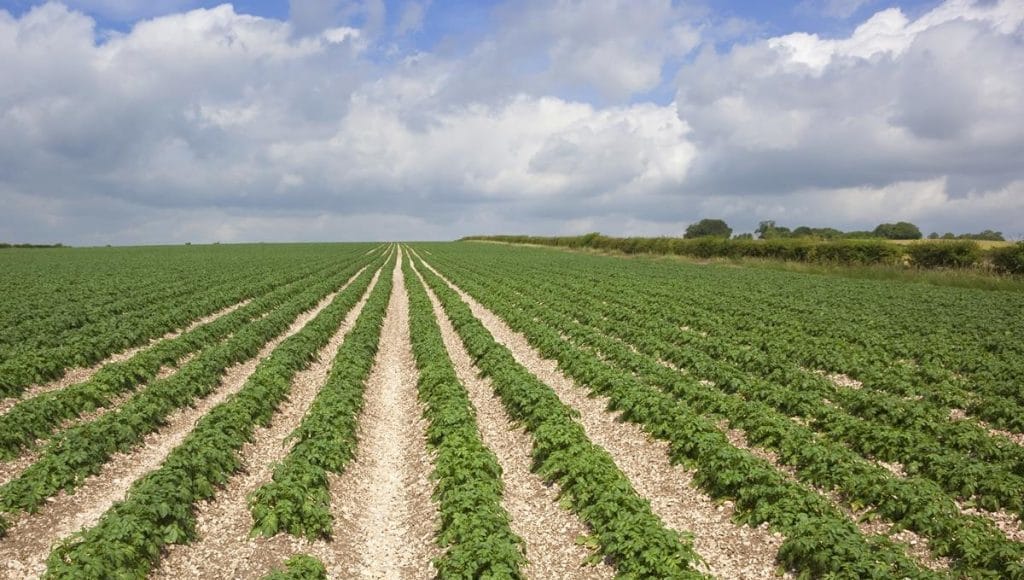 [deck]Potato growers across the country are feeling optimistic this season as increased demand for their product has created some newfound enthusiasm.[/deck]

For most of the past decade, potato production in Canada has been relatively stagnant. The economic crash of 2008 reduced demand for Canadian spuds in some markets and the industry struggled to regain its lost footing.

With the 2018 growing season well under way, there now seems to be a renewed sense of optimism among many Canadian potato growers. Preliminary estimates indicate a total of 353,000 acres will be planted in Canada this season, a boost of about two per cent over last year and the third time in four years that number has increased.

Kevin MacIsaac, general manager of the United Potato Growers of Canada (UPGC), says the increase is largely attributable to processing companies like McCain and Simplot expanding their production lines in this country.

“It’s excellent news. For many years we’ve been stagnant in terms of our production and mostly on the processing side. This year and last year for the first time in a couple of years… we have some real enthusiasm in the industry. There’s demand for more product and the industry has to gear up to meet that demand. It’s a bit of a challenge but it’s a nice challenge to have.”

Another bit of good news for growers is the fact the pipeline is starting to empty out, meaning there will be a relatively smooth transition from last year’s crop to the new one when it comes on. According to MacIsaac, that will give producers an opportunity to set some profitability in their pricing right from the start.

The news isn’t all good, however. There is expected to be an oversupply of red potatoes, especially in parts of the Red River Valley, including Minnesota and North Dakota, which have both rebounded after a disastrous year that saw rain wipe out much of the 2017 crop.

“We’ll be following that pretty closely. That’s the one area where we’ve had some challenges this year in the industry,” says MacIsaac, adding growers north of the border will have to adjust their plans accordingly.

Another situation that bears watching is the ongoing trade discussions between Canada and the United States. U.S. president Donald Trump has threatened to impose tariffs on everything from Canadian steel and aluminum to automobiles and dairy products.

Although the potato industry hasn’t been targeted yet, it remains a concern for growers who do business with its neighbours to the south.

“Absolutely, it’s a concern,” MacIsaac says. “We talk about this often. It’s a focal point of many of our meetings these days. You never know from day to day what’s happening in that discussion (about tariffs).

“For the Canadian potato industry, the way it would affect us is our frozen exports such as french fries. If they were to put a tariff on that it would certainly make it less competitive for us to go in there. Mexico recently slapped a 20 per cent tariff on all (frozen potato products) coming from the U.S…. as retaliation for what the U.S. has done with steel and aluminum. That’s the kind of thing we don’t want to see happen.”

Spud Smart spoke with industry representatives from across the country about the potato crop outlook for 2018. Their comments largely mirror the sense of optimism MacIsaac speaks of.

The total potato acreage in New Brunswick is expected to around 52,000 acres, an increase of about five per cent over 2017. Jean-Maurice Daigle, director of market information for Potatoes New Brunswick, says the increase is largely the result of increased processing demands, both within and outside the province.

Planting in New Brunswick wrapped up in most areas by the second week of June, which was slightly ahead of last year’s pace despite a cool, wet start to spring that delayed planting by seven to 10 days. Frost wreaked havoc on some low-lying areas and resulted in the loss of some early market crops.

Daigle says New Brunswick can expect another typical yield this year if weather conditions are good. Last year, the province produced 294 hundredweight (cwt) per acre. About 62 per cent of this year’s crop will be destined for processing, with 20 per cent being gobbled up by the fresh market and the remainder targeted for seed.

Preliminary indications are that Prince Edward Island’s total acreage in 2018 will come in at around last year’s total of 84,200 acres, which was on pace with the province’s five-year average.

Last year, the province produced an average of 284 cwt per acre and P.E.I. Potato Board general manager Greg Donald says he expects a similar result this year if Mother Nature cooperates.

“At this point we’re optimistic and hopeful for a decent growing season. There’s nothing at this point to worry about other than we were a little later (getting started). But there’s more than enough time to make up for that,” says Donald, adding there were no major pest or disease concerns to start the season.

About 60 per cent of P.E.I.’s crop for this year has been contracted for processing, with 30 per cent destined for the fresh market and the remainder for seed.

Quebec has been a consistent producer for some time and is expected to be so once again in 2018. The province’s total acreage is expected to increase by about 1,000 additional acres from last year’s 42,996 acres as production is ramped up at the Saint-Arneault processing facility in Saint-Hubert. There could also be a slight increase on the fresh market side.

Like most parts of the country, Quebec experienced a cool, wet spring and planting didn’t wrap up until the first week of June, which is slightly later than normal.

Ontario is looking to continue the recovery that began last year following a disastrous 2016 that saw one of the worse droughts in three decades substantially reduce yields. The province rebounded in 2017 to produce 225 cwt per acre and could be on pace to match that number this year if the weather is favourable, according to Ontario Potato Board general manager Kevin Brubacher.

Planting wrapped up on schedule in most parts of the province by mid-June thanks to favourable weather.

Brubacher expects the number of acres planted this year to be around the 35,000-acre mark, a slight decline from last year’s total of 35,400. The decline is being attributed to a couple of growers exiting the business.

The breakdown between processing, fresh and seed will be close to typical averages for the province with about 50 per cent destined for the processed market, a nearly equal amount for fresh and two to three per cent seed.

Brubacher says the province is in good shape in terms of pest and disease pressure, noting its spore trapping efforts in the field have made a significant difference in the fight against late blight.

Optimism remains high in Manitoba as yields have climbed in each of the past six years, topping out at 354 cwt per acre in 2017. And even though another record yield may not be in the cards, Keystone Potato Producers Association general manager Dan Sawatzky says he expects comparable results this year.

Manitoba enjoyed nearly perfect planting conditions this spring – moderately dry soil in early May and just enough precipitation after that, which allowed the bulk of planting to be completed in most parts of the province by mid-May.

The number of acres planted in the province is expected to increase between 1,900 and 2,100 acres from last year’s total of 62,900 due to increased demand by processors.

“It’s not really a surprise,” Sawatzky notes. “We’re in a strong situation here, and with the demand going up and the dollar where it’s at, we’re very competitive with the rest of the markets.”

Processing volumes will make up about 73 per cent of this year’s crop, with 15 per cent designed for the fresh market and 12 per cent for seed. Although growers had to contend with some late blight last year, Sawatzky says there hasn’t been any indications it poses a serious problem this year.

The numbers for Saskatchewan are expected to remain similar to what they were a year ago. That mean’s the province’s total acreage will likely be around 6,500 acres and a similar yield to last year’s 250 cwt per acre following a favourable planting season.

MacIsaac says one of the positives for Saskatchewan is that recent increase in demand by processors will be a boon to the province’s seed potato sector.

Alberta growers finished planting in most parts of the province by May 25, about two weeks later than normal. The good news is most of that lost time had been made up by mid-June thanks to warm weather, says Potato Growers of Alberta executive director Terence Hochstein.

The total acreage in Alberta is projected to increase slightly from last year’s total of 53,570 acres, which Hochstein attributes to growers being concerned about the late start to planting.

Alberta enjoyed a record yield in 2017 at 391 cwt per acre. Hochstein says it’s too early to say how 2018 will compare but adds there is reason for optimism. About 75 per cent of this year’s yield will be contracted for processing, with 18 per cent destined for the seed market and the remainder for fresh.

Ideal planting conditions meant B.C. growers were able to wrap up planting by the end of May. By contrast, most were just starting to plant at that time last year.

While yields were down slightly in 2017, the strong start to this season could mean a stronger showing than a year ago.

The number of acres planted is expected to be relatively static and be close to last year’s total of 6.500 acres.

The potato harvest in Ontario is progressing well but did have to stop early some days this week due to high daily temperatures, Ontario...
Read more
Crop Production

The potato production outlook across Canada is mixed as parts of Eastern Canada recorded one of the driest growing seasons on record while growers...
Read more
Crop Production

Potato harvest progress across Manitoba ranges from 30 to 100 per cent done, with the provincial average at 50 per cent, the Sept. 21...
Read more

Recent innovations in potato handling equipment is making life much easier for growers and their employees. Spud Smart takes a closer look at some of...
Read more
Agronomy

Vine Killing: Timing is Everything

Are you up to speed on the latest information about vine killing? Here’s what the experts had to say.As any potato grower will attest...
Read more
Tweets by SpudSmartMag