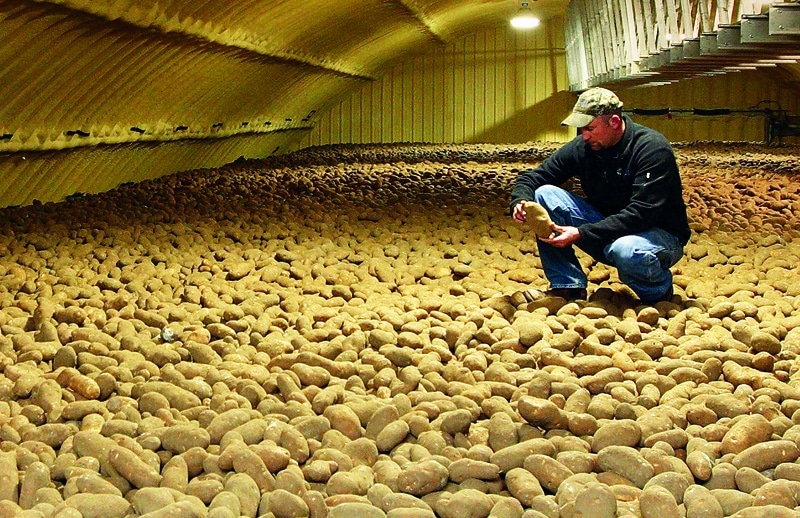 Last year’s brutally hot and dry late season conditions across some of Canada’s key, non-irrigated potato growing regions are translating into a bad/good news supply situation for seedstock producers. If there was ever a year to invest proactive effort into your seed potato pile, this is that year.

In regions affected by the heat and dry, many seed potato producers suffered much lower yield than originally projected. The tubers those producers did get into storage last fall might have looked okay rolling onto the pile, but will be carrying drought-related physiological stress which will lead to reduced dormancy, earlier sprouting, and much more significant shrink. On the positive side, however, low supply means there’ll be market demand for every seedstock tuber available. I’ve already been hearing of multiple growers being asked to sell as seedstock piles originally destined for table sale. As such, expect higher pricing for all seedstock in 2021.

Maximizing your seedstock pile will take a careful eye and timely management. Admittedly, seed potato producers don’t have a lot of available options in the sprout-management toolbox. About 80 per cent of farmers manage sprouts by keeping their storage as cold as possible, then chitting their seed as necessary. Relying only on temperature and chitting is risky and costly, especially in a year like this when tubers will be raring to push sprouts, since every sprout removed takes a portion of that tuber’s salable weight and its growing-season vigour with it.

A much better option is to take advantage of nature’s own solution.

Potatoes rely on a hormone called 1,4 Dimethylnapthalene (1,4 DMN), produced inside the tuber in the fall, to hold back sprout growth and maintain dormancy. In spring, the hormone volatilizes away, allowing the tuber to start pushing sprouts in preparation for a new growing season.

Synthetically produced 1,4 DMN (sold as 1,4 SEED) works exactly the same way, but allows a producer control over dormancy’s timing. Registered in Canada since 2012 for use on seed potatoes, 1,4 SEED is the only dormancy-extending option available to Canadian seedstock producers. 1,4 SEED also offers the added benefit of breaking apical dominance in almost all the varieties we tested, leading to a more uniform plant stand and more effective in-season management.

As of last year, about 20 per cent of Canadian seedstock producers took advantage of 1,4 SEED. I expect that number to jump as producers increasingly appreciate the critical importance of in-storage management to their bottom line.