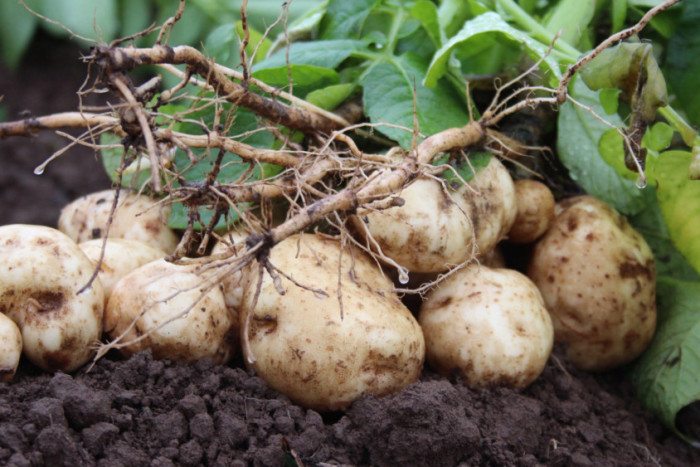 Imagine a substance with the potential to fight cancer, Aids, osteoporosis and heart disease, as well as curing ulcers, healing wounds and killing drug-resistant bacteria.

Scottish agricultural scientists are investigating the possibility of extracting the compound, called solanesol, from the leftover leaves of potato harvests, which are usually burnt off or dumped.

The chemical is already a key component in the manufacture of coenzyme Q10, which is used in beauty products to combat the appearance of ageing.

Now studies are under way to establish its full powers. Solanesol is found in plants from the family that includes tobacco, peppers, aubergines – and potatoes.

Professor Stewart, head of plant chemistry, said: “Solanesol has been researched for a few years now but China is the major source. The research has been quite spectacular. There is an awareness that it may have properties in its own right, like antibacterial, anti-inflammation, anti-ulcer, so its end uses are fairly wide.

“It’s also looking like it may have some ability to reverse things like antibiotic resistance or for sensitising tumour cells, so that targeted treatments work even better – a double whammy.
“Other derivatives have come into focus with regard to treatments for cardiovascular disease, wound healing and osteoporosis. It sounds like a wonder drug.

“Currently its biggest use is in the cosmetics industry because it has a certain skin-smoothing effect and therefore an anti-ageing effect.”

More than 25,800 hectares of potatoes were grown on 2,600 farms in Scotland last year, bringing in around £167 million for the Scottish economy.

Potato plants produce more than five tonnes of stems and foliage per hectare, with an estimated solanesol content of around 40 kg.
Depending on its purity, solanesol can command huge prices. Conservative estimates suggest it could be worth at least £156,000 per hectare.

Dr. Taylor, a senior researcher for the organization’s cell and molecular sciences group, says research results have been encouraging.

“We believe there is considerable potential for harvesting the foliage and extracting added value from the potato crop,” he said. “Our combined approaches offer new insights into how solanesol accumulates and gives insight on developing a bio-refinery approach to potato production.”

Farmers have responded enthusiastically to the possibilities that solanesol production could offer. Peter Grewar, chairman of the Potatoes Working Group at NFU Scotland, said: “I always knew potatoes were good for you but this is taking it to a whole new level. The research is obviously in its very early stages but the potential for ‘tattie shaw solanesol’ means that it could be a fairly exciting prospect.”