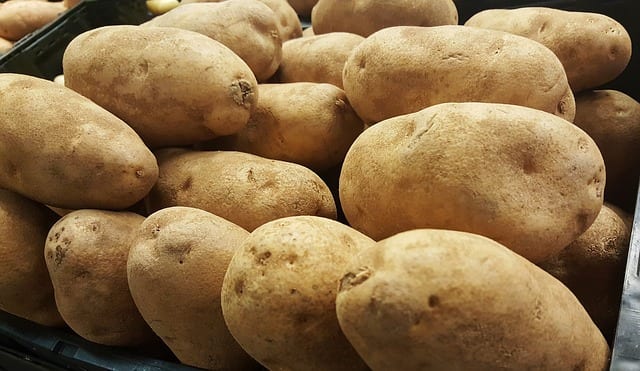 The pandemic and dry weather have pushed Canadian potato stocks down.

2020 was a hard year for Canadian potato growers between the global COVID-19 pandemic and dry growing conditions. The latest potato storage numbers from Statistics Canada illustrate this well. As of March 1, total Canadian potato storage holdings were eight per cent below the three-year average — marking a nine-year low.

“There definitely are some regional differences there that will have some repercussions in some situations and creating shortages at packing sheds or some movement of potatoes around throughout the supply chain,” Kevin MacIsaac, general manager of the United Potato Growers of Canada (UPGC), says during a potato markets presentation at the Canadian Spud Congress on Feb. 24.

For fresh potatoes, Canadian holdings are estimated at 8.1 million hundred weight (cwt), which is 5.8 per cent below the three-year average. The drop is led by Prince Edward Island, who was plagued by a drought during the 2020 growing season. Conditions were similar in New Brunswick, but potato stocks are above the three-year average there. Table stocks in Western Canada are up 23.8 per cent in Manitoba, and 27 per cent in British Columbia.

“It would need to be noted that New Brunswick did import some potatoes into their threshold last fall from the province of Quebec, mainly for their fresh needs, because they realized they’re going to be short,” MacIsaac says.

Processing stocks are down 9.5 per cent below the three-year average. New Brunswick suffered the worst drop at 44 per cent. Alberta is down two million hundred weight below historical levels, and P.E.I. is down 9.1 per cent. In Manitoba and Quebec though french fry spud holdings are above three-year averages and in Ontario chip potato stocks are up 22.4 per cent.

Seed inventory across the country is four per cent below the three-year average at 8,360,000 cwt. All four eastern provinces have lower stocks with New Brunswick suffering the biggest drop at 37.7 per cent. B.C. seed stocks are down 25 per cent, while Alberta is up 12.4 per cent and Manitoba rose 10 per cent.

Heading into planting, MacIsaac has heard many concerns from growers. Most are still worried about the ongoing effects of the pandemic. There are a lot of questions about what demand will look like moving forward and if there will be a third wave.

“Almost every grower in every category is concerned about over planting. Doesn’t matter if you’re a fresh grower, process grower or seed grower, most growers understand the negative effect it has in your profitability to plant too many potatoes and more potatoes than what North America requires,” MacIsaac explains.

There is also concern about growing conditions heading into the planting season. It has been drier than usual in Western Canada with little snowpack, meaning there could be a lack of moisture in the ground for planting. Eastern Canada has also saw repeated hot, dry growing seasons, so there is concern that could continue, MacIsaac adds.

“Those are all the things that we don’t have a handle on today. And I’m not sure anybody does, but we have to track this closely as we get closer to planning,” MacIsaac says.

Down south there has been some news about contract negotiations for processing potatoes for the upcoming growing season. As of February, one of the major processors was asking for a four per cent reduction in price for contracts with growers in the Columbia Basin, Dale Lathim, executive director of the Potato Growers of Washington, Inc., says during the potato markets presentation.

“It’s safe to say that the negotiators are off to a tough start in the Pacific Northwest. While both the growers and the processors admit that the other side has been impacted by the pandemic, it’s very, very difficult to get either side to see where each is coming from,” Lathim says.