OUR NEIGHBOUR TO THE SOUTH 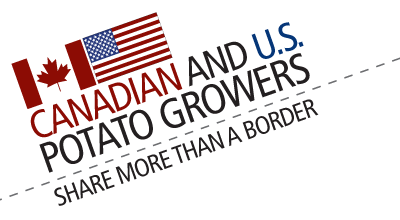 A look at the U.S. potato industry as well as our relationship with our neighbour to the south.

Potato production in the United States is now worth about $3.45 billion USD per year, but the number of potato acres has been trending downward for the last few years.

One of the reasons for more profit on less land is an average annual increase in productivity of one to two per cent as farmers adopt better technology, says Lee Frankel, executive director of the United Potato Growers of America.

In 2009, 1,069,800 acres were grown commercially in the United States, with Idaho, Washington, Wisconsin, California and North Dakota leading the 36 states for which the USDA reports data on potato production. Most of the potatoes are bound for the domestic processing industry, where 35 per cent become french fries, 13 per cent end up as potato chips and around 11 per cent are dehydrated.

Demand is also declining, says Frankel, for several reasons. Consumer trends focusing on healthier eating habits have resulted in many fast-food restaurants moving away from super-sized combination meals. At the same time, the popularity of low-carbohydrate diets have helped reduce demand for both fresh potatoes and frozen products, such as french fries.

The fresh potato market accounts for about 28 per cent of annual U.S. potato production. Demand for fresh potatoes varies in any given year, depending on buying patterns and consumption. According to Frankel, fresh potato demand has stabilized over the last few years, perhaps in part due to the economic downturn, which has resulted in the preparation of more meals in the home.

Over the last year and a half, the total volume of sales for domestic frozen processed products has dropped. However, export demand has been strong enough to offset losses at home, keeping sales relatively stable overall, adds Frankel. In 2008, for example, the United States exported 1,753,279,000 pounds of french fries and other frozen potato products.

“We can compile a complete North American potato picture that tells us what’s in the ground, what’s in storage, what the quality is and, most importantly, what’s moving out of storage and when.” Mark Drouin

But the United States still imports more fresh and seed potatoes than it exports, and most of those imports come from Canada, which harvested around 344,000 acres in 2010. Almost 90 per cent of Canada’s potato exports go to the United States, creating a market worth around $115.6 million CDN in 2009/10.

Although there is some concern that a strong Canadian dollar will affect exports to the United States, Mark Drouin, vice-president of potatoes for the Canadian Horticultural Council and general manager of the United Potato Growers of Canada says some sectors of the industry, particularly seed potatoes, will remain resilient despite competition from other countries. “We have great quality seed in Canada,” says Drouin. “Along with high disease resistance, great colour and size production consistency, world class service, and competitive prices, Canada has a phenomenon called northern vigour, where seed that is grown or propagated in a cold, northern climate produces exceptional yield and quality when planted into a warm climate like the southern or central United States.”

The Canadian domestic potato market largely serves its own processing industry, which consumes around 62 per cent of Canadian production. In years where supply is short in Canada, the processing industry has sourced an increasing amount of potatoes from the United States and other countries.

That’s where cooperation between the UPGA and UPGC has produced some great benefits, says Drouin. “In the years where we have a low count of processing potatoes in Canada, we don’t want our contractors to have to stop production,” says Drouin. “So that’s when we look to our friends in the south—to supplement our supply with their potatoes. There’s some of that going on right now because Canada does have a short crop. There’s a lot of good cooperation going on.”

Ongoing communication between the two organizations also helps maintain a viable market for growers on both sides of the border by allowing them to share information about potato production and markets. It’s “Economics 101,” says Drouin, to understand and balance this supply and demand. “We share our market situation and our market forecasts with UPGA and they do the same with us,” he says. “So, as growers, we know what we have in the ground and what to expect with respect to the total supply at the end of harvest. We can compile a complete North American potato picture that tells us what’s in the ground, what’s in storage, what the quality is and, most importantly, what’s moving out of storage and when.”

This is vitally important in an industry that can experience volatile swings in the market. For example, last year in Northern Europe and Russia, potato shortages caused by weather-related issues bolstered global demand and offered some potato-producing areas of North America lucrative, if temporary, marketing opportunities. But serving this short-term demand can cause price disruptions in the market with long-term implications. Therefore, an understanding of the reasons behind market deviations is vital to ensuring growers do not produce more than the market demands, and prices remain stable.

“The fundamental thing that UPGA and UPGC do together is make sure that we are sharing information on what’s really happening with the crop, where demand truly is on a North American basis, and what’s happening with consumption within the continent, as well as export demand,” says Frankel. “So, when a one-off situation occurs, like a once-in-every-fifty-year drought in Russia, we can make sure we understand that the [effect on the market] is the impact of weather, as opposed to a fundamental shift in demand.”

According to the latest information on U.S. potato production estimates, Frankel says there may be a six per cent increase in acreage for the coming year, based on processor intentions, shifts in demand and industry speculation. “One area that probably does have more statistical certainty is last year’s yields were below normal. If yields return to normal levels, planted fall potato acres will produce an additional three per cent more potatoes from yield improvements on top of the six per cent coming from extra acres.”

The CHC’s Canadian Potato Council also works with the National Potato Council in the United States on technical issues, such as bilateral trade agreements, phytosanitary agreements, and facilitating both the trade and consumption of potatoes between Canada and the United States. “If we didn’t have this relationship, I am assuming there would be much less cooperation,” says Drouin. “We have all been coming to the table with this information for many years, which has established trust and created a positive environment to share information and address issues that would otherwise hinder trade and consumption.”

“The grower has a tool to cut through the rhetoric in order to understand the actual supply and demand situation. They need to be able to make rational decisions for themselves in terms of production plans and marketing strategies.” Lee Frankel

The UPGC and UPGA, together with the National Potato Council, are working to dispel some of the negative perceptions consumers may have about potatoes and nutrition. While it appears that U.S. consumers do not view fresh potatoes as negatively as they did during the height of the low-carbohydrate diet era, there is still much work to be done to improve the image of processed potato products, such as french fries.

“On the processed side, there is a sense by certain groups within the nutrition community that obesity is to be blamed on fast-food restaurants, and french fries in particular,” says Frankel. “There’s a move in the United States to expand work on the public relations side, in a similar way that some processors in England dealt with misconceptions there.”

As planting continues, farmers on each side of the border benefit from the dependability of the information flowing between their respective grower organizations, says Frankel. This information then becomes an invaluable resource for growers. “The most important thing about having the organizations communicating with each other is the grower has a tool to cut through the rhetoric in order to understand the actual supply and demand situation. They need to be able to make rational decisions for themselves in terms of production plans and marketing strategies,” he says.