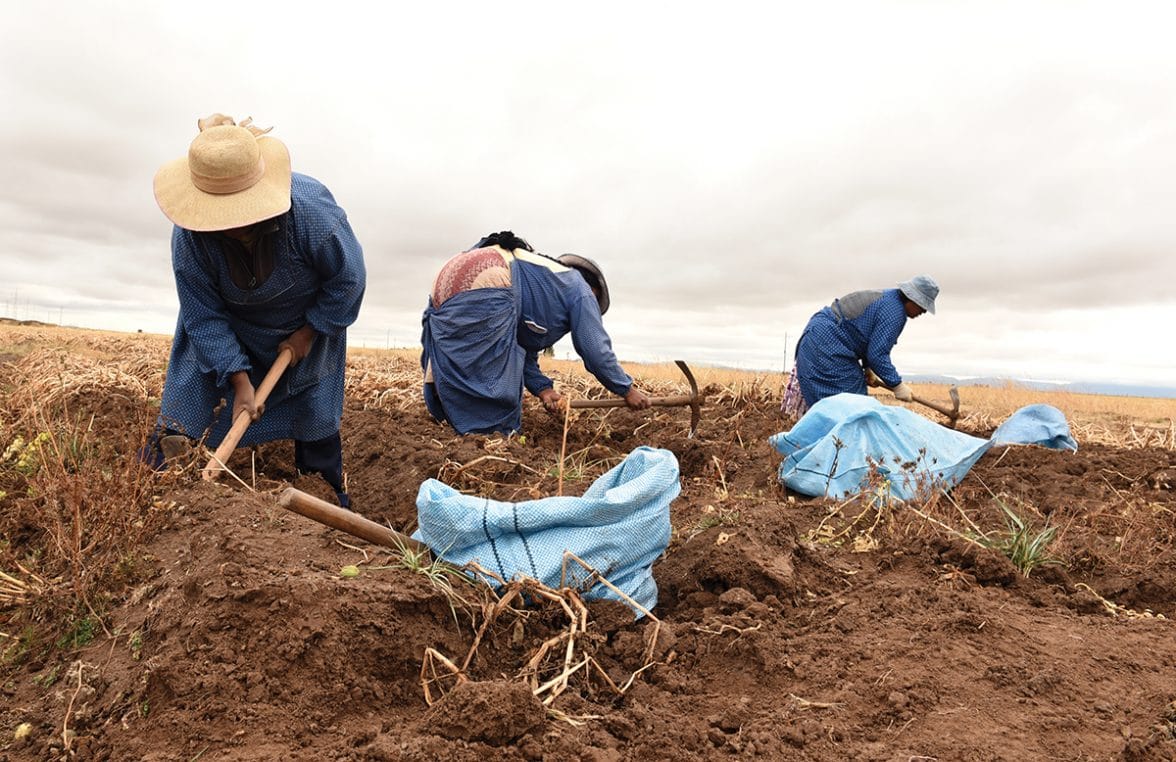 By William Schaefer, University of Wisconsin-Madison

In a country with more than 5,000 potato varieties, you might not expect the arrival of another one to be a big deal. But this is Peru, where the potato was first domesticated and still plays a vital role in national identity.

In Spanish you might call it patrimonio or orgullo; in English it translates to national pride or honor. However it’s phrased, for the people of Peru, the concept is forever entwined with the potato, a totemic symbol of the indigenous cultures and heritage of their country and the surrounding Andes.

Now, a trio of CALS scientists has helped extend this rich tradition by introducing a new, frost-resistant variety that can help Peruvian potato farmers contend with difficult growing conditions caused by a changing climate. It’s the latest outcome of a decades-long collaboration with Peruvian researchers that is still going strong.

The three UW scientists — John Bamberg, Alfonso Del Rio, and Jiwan Palta — worked closely with researchers from Peru’s International Potato Center (CIP) and the Instituto Nacional de Innovación Agraria (INIA), and with Peruvian farmers, to develop the new variety, called Wiñay. The word means “to grow” in Quechua, one of Peru’s indigenous languages. The frost-resistant potato is long and thin with brown skin and yellow flesh and is grown for the fresh market. It was developed to be cultivated in Peru’s Altiplano at elevations of up to 14,000 feet above sea level.

Palta, a professor of horticulture and plant physiologist with the Plant Breeding and Plant Genetics program, says many of the wild potato varieties found in the Altiplano are naturally hardy and can tolerate temperatures down to 14 degrees F. However, these potatoes are small and have a bitter taste due to high levels of chemical compounds called glycoalkaloids.

The need for a hardier, frost-resistant potato in Peru’s highlands stems, in part, from climate change, according to both Palta and del Rio, a senior scientist in charge of the U.S. Potato Genebank research lab at UW. They say more frequent late-season killing frosts are causing greater yield losses for Peru’s farmers.

But developing a new potato variety to withstand such conditions is a time-consuming project, one that typically spans 10 to 15 years. The devil can be in the genetic details when crossing potato varieties to develop a new one. And an effective frost-resistant potato also needs good commercial qualities, including appropriate size, yield, and taste, and must be suitable for the growing conditions of the Altiplano.

Bamberg, director of the USDA Agricultural Research Service’s U.S. Potato Genebank in Sturgeon Bay, Wisconsin, and a professor of horticulture, compares the process to looking for a needle in a haystack.

“Sorting out the offspring, you get just a bewildering number of possibilities to select from,” says Bamberg. “Breeders put out thousands and thousands of progeny and select from them over decades to find that one better one.”

The project began in 2005 using progeny of a Wisconsin potato clone that had good frost tolerance, yield, tuber size, and eating quality. The clone carried the genes for frost hardiness from a wild potato species called Solanum commersonii. The progeny of this clone was selected in Wisconsin, but, when tested in frost-prone areas of the Peruvian highlands, it didn’t perform well because the Peruvian summer days are shorter than the Midwest’s.

“So Jiwan, John, and I discussed using some of the Peruvian potatoes we have in the collection at Sturgeon Bay,” del Rio says.

They chose seven Peruvian varieties. After crossbreeding with the Wisconsin frost-hardy clone, they sent about 20,000 seed potatoes to Peru for field trials at the INIA experimental station in the southern city of Puno. With each passing year, they evaluated new progeny for the preferred qualities and traits and narrowed the pool until arriving at the one potato that came to be Wiñay.

After 10 years of field trials, the culling process, the final variety selection, and the naming of the potato, there came a time to celebrate. In November 2018, near the shoreline of Lake Titicaca in Puno, del Rio, Palta, and Palta’s wife, Mari, participated in the public introduction of the Wiñay potato.

More than 200 students, farmers, producers, scientists, and industry and government officials attended the four-hour fete, which concluded with the distribution of Wiñay potatoes in brown paper bags. Both Palta and del Rio found the ceremony to be an enjoyable opportunity to recognize everyone’s hard work.

“It’s always heartening to see the end result of your labor,” says Palta. “Research by definition means you search again and again, and sometimes you hit a winner, and in this case, we have one. Scientists [in Peru] have evaluated it and feel good about it.”

Following the celebration, a jovial Jesús Arcos Pineda, senior potato researcher at INIA, says he is looking forward to more cooperation and interaction with the CALS research team. Pineda is one of the CALS research team’s closest collaborators, along with Rene Gomez, senior curator at CIP’s gene bank.

In addition to the practical side of the potato ceremony, del Rio says there is a spiritual gratitude for the potato’s role in Peruvian villages. “The farmers receiving the potatoes, they appreciate whatever comes from Mother Earth, and potatoes have been such an important part in the life of these communities that they appreciate it very much.”

The Department of Horticulture at the University of Wisconsin-Madison is one of the four original departments of the College of Agricultural and Life Sciences and was founded in 1889. Home to 12 state-supported faculty members and 25 staff members, as well as 8 federally-supported faculty members, the department serves as a home for instruction, research, and outreach activities in many aspects of horticultural science. Since the 1960s, our department has benefitted from a strong partnership with the Vegetable and Cranberry Research Unit of USDA-ARS, which provides support for the 8 federally supported faculty programs, staff, and students.

The Department provides programs that are focused on fundamental studies of plant biology, crop production, and utilization of horticultural crops. It also provides educational opportunities for the pursuit of careers in horticulture, strengthens the competitive position of Wisconsin’s horticulture industry, and works to increase the use of plants for environmental improvement and as a source of personal enrichment. The work of department faculty, staff, and students has made substantial impacts in the state and nation for over 125 years.

Source: University of Wisconsin-Madison, Department of Horticulture, College of Agricultural and Life Sciences