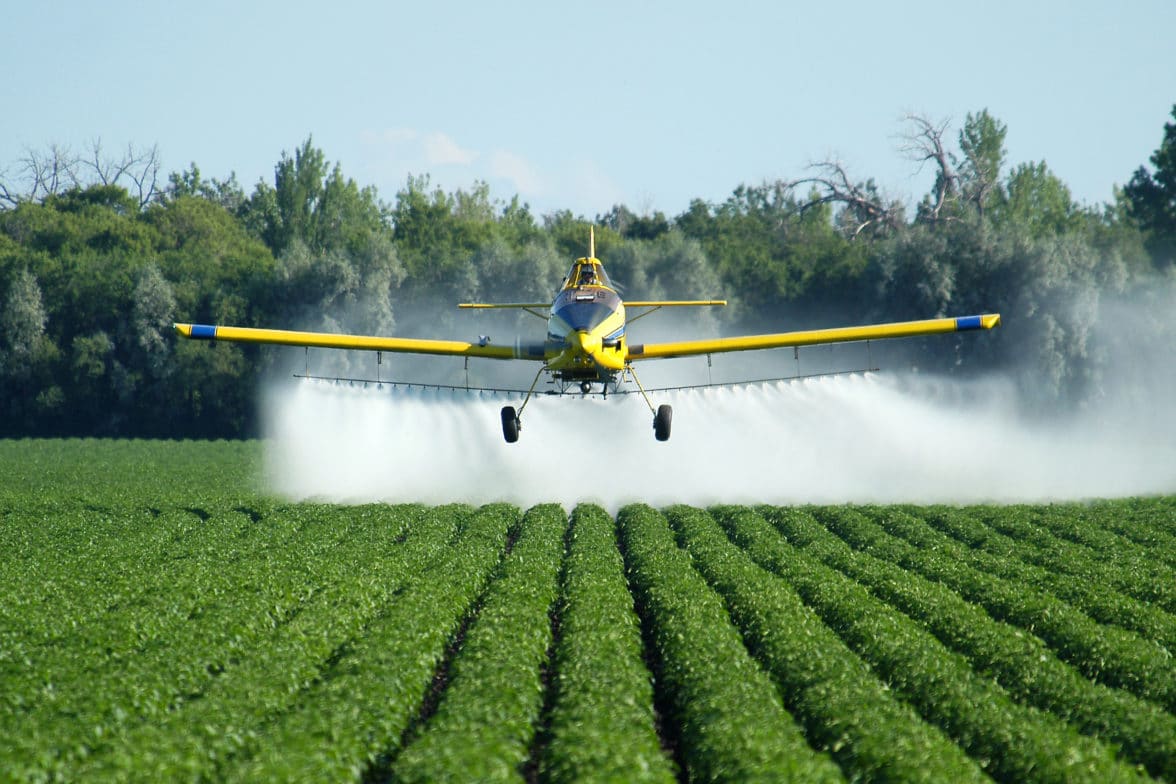 Mancozeb being applied aerially to a potato field in Manitoba. Photo: Jonair Ltd.

Keeping Up with Change

Recent re-evaluations by the Pest Management Regulatory Agency mean potato producers should take extra care to read the label when applying pesticides like chlorothalonil this year.

In recent years, special reviews and re-evaluation decisions on pesticide uses by Health Canada’s Pest Management Regulatory Agency (PMRA) have had a considerable impact on potato farming in Canada.

For growers and other stakeholders in the industry, it’s been a challenge to keep up with regulatory revisions which have resulted in significant label changes and tighter restrictions for several important crop protection products.

In January, Tracy Shinners-Carnelley, vice president, research and quality for Peak of Market in Manitoba, talked about the PMRA re-evaluations at Manitoba Potato Production Days, stressing to growers how they need to be mindful of some new restrictions on pesticide use for the upcoming crop year — including one change she says most potato producers probably aren’t even aware of.

This change specifically relates to the use of chlorothalonil, the Group M fungicide which, along with another broad-spectrum product mancozeb, has formed the backbone of disease management in potatoes for many years, according to Shinners-Carnelley.

Following the PMRA’s re-evaluation decision on chlorothalonil in 2018, growers are now restricted to three applications of the fungicide on their potato crops per year. Other measures were added to the label to reduce exposure to workers who prepare and apply the pesticide, as well as those who spend time in a field after it’s been sprayed.

Shinners-Carnelley points out this year there will be something new on the chlorothalonil label — vegetative filter strips. “This is a big change,” she says. “I don’t think that growers are really familiar with this new requirement.”

Shinners-Carnelley explains a vegetative filter strip is something distinctly different from the spray buffer zones farmers are familiar with. Where a spray buffer zone protects terrestrial and aquatic habitats from spray drift, she says, a vegetative filter strip is aimed at reducing risk to aquatic organisms from run-off and is a permanent fixture of at least 10 metres wide which has to be planted and maintained.

The main objective of Shinners-Carnelley’s presentation at Manitoba Potato Production Days was to help get the word out about vegetative filter strips and other changes, so potato producers can be compliant with new chlorothalonil label, she says. In order for this to happen though, growers will need more information on vegetative filter strips.

The problem, according to Shinners-Carnelley, is the strips need to be established on downhill slopes adjacent to an aquatic habitat — but there’s nothing on the chlorothalonil label stating what constitutes downhill or if it’s determined by a particular slope’s angle. She adds the definition of an aquatic habitat is also up for discussion.

“I think this is an area where further work needs to be done in terms of giving good guidance to producers, so they know what the best way is to construct a vegetative filter strip,” Shinners-Carnelley says.

She notes PMRA has indicated it’s working to provide clearer direction in this area and a vegetative filter strip calculator, similar to the spray buffer zone calculator available on the PMRA website, was among the options under consideration.

Shinners-Carnelley believes it’s likely vegetative filter strips could become a requirement for other pesticides as well.

“I think this particular label [for chlorothalonil] is one that’s bringing everyone’s attention to it. But I also feel that this will continue to be the way of the future in terms of sustainable pesticide use practices,” she says.

“I’m very confident that going forward, we’re going to become a lot more familiar with vegetative filter strips and how they work and how they can fit into our production systems.”

Shinners-Carnelley says another significant label change growers need to be aware of concerns re-entry intervals for those going into a field after chlorothalonil has been applied. The required re-entry interval for scouting has gone up from two to three days, while for roguing, it’s 19 days — which Shinners-Carnelley contends will be a challenge for some seed potato producers.

“Many seed growers do roguing as part of their management practices during the growing season,” she says. “To do this, they need to be in the field much more frequently than every 19 days, so that is really restricting their ability to use chlorothalonil at particular times during the season.”

Shinners-Carnelley notes all of the new requirements for chlorothalonil use need to be in place for the 2020 growing season, adding it’s important for potato producers to carefully check the most recent label to ensure compliance. Growers should refer to the most up-to-date official label, which may not be the one on the chlorothalonil jug itself but is listed on the PMRA pesticide registry online.

Later this summer, the PMRA is expected to release its final re-evaluation decision on mancozeb, the other Group M fungicide favoured by growers for controlling late blight and early blight.

The potato industry has put a tremendous effort into providing the PMRA with detailed information on the current use patterns for the fungicide, Shinners-Carnelley says. She’s hopeful the final decision will include some level of continued use for potato producers in Canada. 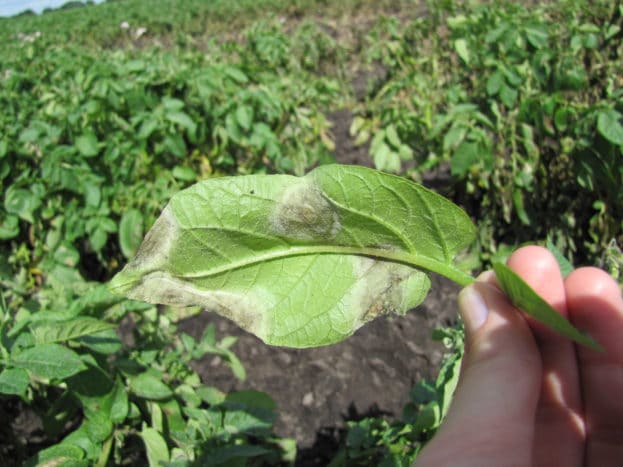 A field of potatoes infected with late blight. Photo: Tracy Shinners-Carnelley, Peak of the Market

Shinners-Carnelley notes a third Group M fungicide, metiram, is no longer an option. The PMRA completed a re-evaluation of the fungicide in 2018, deeming it acceptable for use in potatoes with conditions. However, the manufacturer decided to discontinue the product.

According to Shinners-Carnelley, there is a fourth Group M fungicide permitted in potato production which isn’t being utilized by the industry. Captan recently underwent a PMRA re-evaluation, and like chlorothalonil, it’s registered for a maximum of three applications per season — including ground and aerial sprays.

“Captan is not a fungicide that’s been used in potatoes,” Shinners-Carnelley says. She thinks the fact that other Group M options have been a good fit for potatoes could be one reason why, or it might be because few in the industry are even aware captan has a potato label.

“If we get to the point where a PMRA decision comes back that severely limits the use of other Group M fungicides, something growers might want to do going forward would be to look at captan and see if it is an option that may fit into their program,” Shinners-Carnelley says.