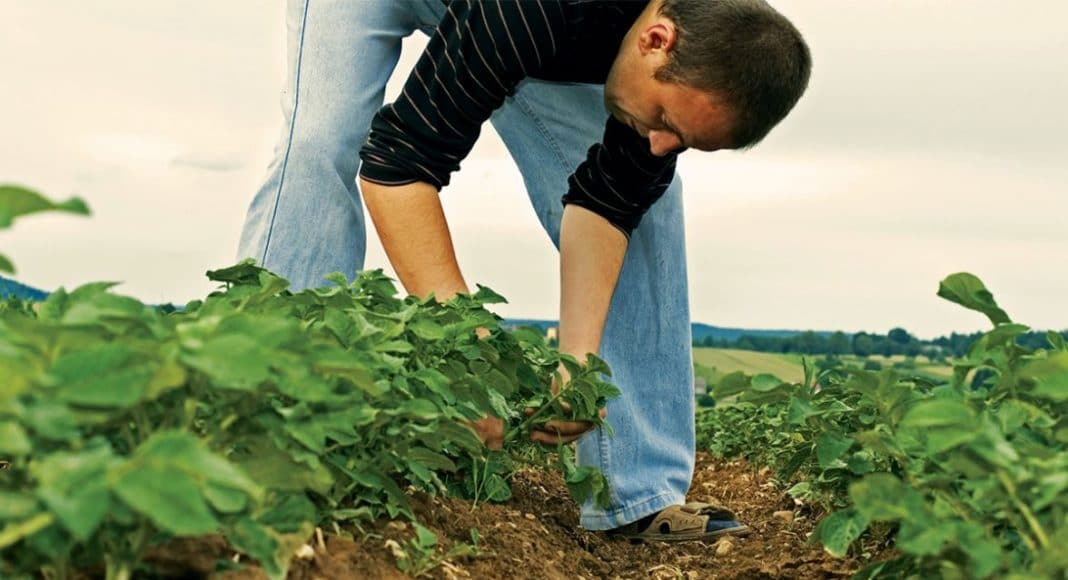 [deck]An integral part of IPM, regular field inspections can not only assist potato growers in making important pest control decisions but can help save them time and money.[/deck]

As most commercial potato growers know, field scouting is a vital part of a farm’s Integrated Pest Management program. Crop scouts move methodically through fields looking for pests, measuring plant and pest populations and collecting information that growers can then use to make important pest control decisions. This information can help growers know not only if pest control measures are needed, but where they are needed.

Many of the insects, diseases and weeds common to Canadian potato farms can be monitored by timely field scouting. Problem insects include the Colorado potato beetle, potato flea beetle, European corn borer, tarnished plant bug, cutworms and aphids, to name a few. In recent years, the potato psyllid has gained increasing notoriety as the transmitter of zebra chip disease, so named because of the patterned, brown striations that occur on chips fried from infected tubers. Psyllids have been migrating northwards in the United States in recent years, although to date there have been no recorded instances of zebra chip in Canada.

Late blight, early blight, rhizoctonia and blackleg are some of the common potato diseases that crop scouts look for. There are a number of weeds that are monitored by scouts, including lamb’s quarters, wild buckwheat, Canada thistle, perennial sow thistle, green foxtail, quackgrass and wild oats.

Since pest populations can vary widely, spraying without scouting first may result in unnecessary or insufficient pesticide applications. Crop scouting also provides early detection of other problems that may be present in the field such as nutrient deficiency or herbicide injury.

Rachael M. Cheverie, an IPM specialist with the Prince Edward Island Department of Agriculture and Forestry, points out that by using information collected by crop scouts, pesticide applications can be timed for the greatest effectiveness and possibly even reducing the need for further applications.

In a bulletin entitled Crop Scouting in PEI Potato Fields, Cheverie says that field walks are important not only from a pest management standpoint, but also from a stewardship perspective of using pesticides in the safest and most efficient way possible. She says scouting can help growers save money by avoiding unnecessary pesticide applications.

When growers are considering information from crop scouts, they should base their management decisions on the principle of economic thresholds. In essence, this means that the cost of the pest damage should be weighed against the cost of the pest treatment. Potato specialists at the University of Maine Cooperative Extension point out in Field scouting: A tool for potato pest management that the economic injury level is the point at which the pest level is high enough to destroy an economically significant amount of the crop, and when the value of this crop loss exceeds the cost of pest suppression treatment.

Crop scouts know that random sampling throughout the field is important in obtaining good data. Most usually walk the field in a V, X or Y pattern. However, some insects and diseases may be prevalent in only certain parts of the field, so it is important that these areas are scouted systematically as well. Scouts also need to pay attention to parts of the field that may be disease-prone — for example, low-lying or shaded areas that tend to be damp for long periods of time should be checked for signs of early and/or late blight.

Let’s take a look at some essential principles and guidelines for effective crop scouting of some of the most important potato pests.

Eugenia Banks, a potato specialist with the Ontario Ministry of Agriculture and Food, provides suggestions for scouting for insects in a bulletin entitled Common Potato Insects: Scouting Guidelines.

The Colorado potato beetle is a familiar pest throughout North America. According to Banks, scouts should keep the following in mind when scouting for this insect:

The potato flea beetle is another well-known pest in Canadian fields. Banks advises scouts to approach plants cautiously as flea beetles can jump away quickly. “Make observations as you approach the selected plants. Take care not to have your shadow fall on the plant before you can count the flea beetles,” she says, adding that damaged leaves usually have a “shot hole” appearance. Scouts should also watch for flea beetle infestations where potatoes are grown close to crucifer crops. The insects may be established only in certain areas but when infestation is heavy they can be found throughout the whole field.

Potato leafhoppers are another pest that can cause significant economic losses if detected late. The insect injects a toxin into a plant, causing a kind of damage known as hopper burn — a yellowing and curling of the tips and margins of leaflets which ultimately turn brown and brittle. The damaged plants die prematurely and yields can be reduced as a result. Leafhoppers are tiny and hard to see, and will fly very quickly when disturbed. Banks notes that scouts should not confuse leafhopper nymphs with aphids. Aphids walk very slowly while leafhopper nymphs move fast and walk sideways.

Aphids are usually monitored at the same sites selected for Colorado potato beetle scouting. At each site, scouts are urged to select five plants, and then count all the aphids found on one leaf per plant. The sample leaf should be from the mid-section or lower half of the plant. Later in the season, as the lower leaves begin to senesce, scouts should sample three green leaves and two senescing leaves per site.

For the tarnished plant bug, plant sampling is the same as for Colorado potato beetle monitoring. Banks advises scouts to make observations as they approach selected sites and keep in mind that adults fly quickly when disturbed. Nymphs walk quickly on leaves, and will drop to the ground when the plants are shaken.

Cutworms are another pest which literally cut off the stems of small plants. Scouts need to be mindful that the most damaging generation of cutworms develop in July and August.

In a bulletin entitled Scouting for and Managing Potato Psyllids and Psyllid Yellows, American entomology and plant pathology experts Jeff Bradshaw and Bob Harveson offer this advice when scouting for potato psyllid nymphs:

Since pest populations can vary widely, spraying without scouting first may result in unnecessary or insufficient pesticide applications. Crop scouting also provides early detection of other problems that may be present in the field such as nutrient deficiency or herbicide injury.

According to Cheverie, when scouting for late blight, a good overview of the entire field is important but emphasis should be placed on those areas that take longer to dry out after a rainfall or heavy dews, such as the field edges shaded by hedgerows and areas with poor airflow. Fields should be scouted on a regular basis (at least once per week) and more frequently when the late blight severity index in a particular region is high or severe. Scouts should look for dark brown to black lesions on leaves and stems of the plants. Often white mycelium is also noticeable on the underside of the lesion.

Early blight is characterized by round bull’s-eye lesions of concentric rings on the leaves of potato plants. For both early and late blight, early detection is very important in slowing down development of the disease and preventing its spread.

Rhizoctonia is a familiar soil-borne disease that causes black sclerotia to form on the tubers. Cheverie points out that this may affect their quality for table stock usage and cause a loss in vigour in seed potatoes. Rhizoctonia-infected seed can result in stem girdling in young plants, which eventually stunts the plant by interrupting nutrient and water flow.

According to Cheverie, weeds should be monitored in the fall before a potato crop is planted the following spring. Herbicides should be chosen to combat the types of weeds that are present. Usually a fall application of a broad spectrum herbicide, along with a pre-emergence herbicide in the spring, will provide sufficient control for the potato growing season. On the first scouting trip each year, scouts should take note of any weed problems and determine if there is an issue with resistance or misapplication.

The potato specialists at Maine University advise growers to draw a “weed map” to keep track of the types of weeds and specific field locations from year to year. This is particularly important if there are serious weed problems in the later part of the season so that specific areas can be targeted for treatment the following spring. Because weed problems are often not evenly distributed in a field, spot treatments can lead to better control and cost savings.

It is well known that untreated pests can cause severe damage to a potato crop by reducing both yield and quality. Effective scouting of fields is essential in assisting growers make sound pest control decisions, which in turn helps them manage their costs more efficiently.