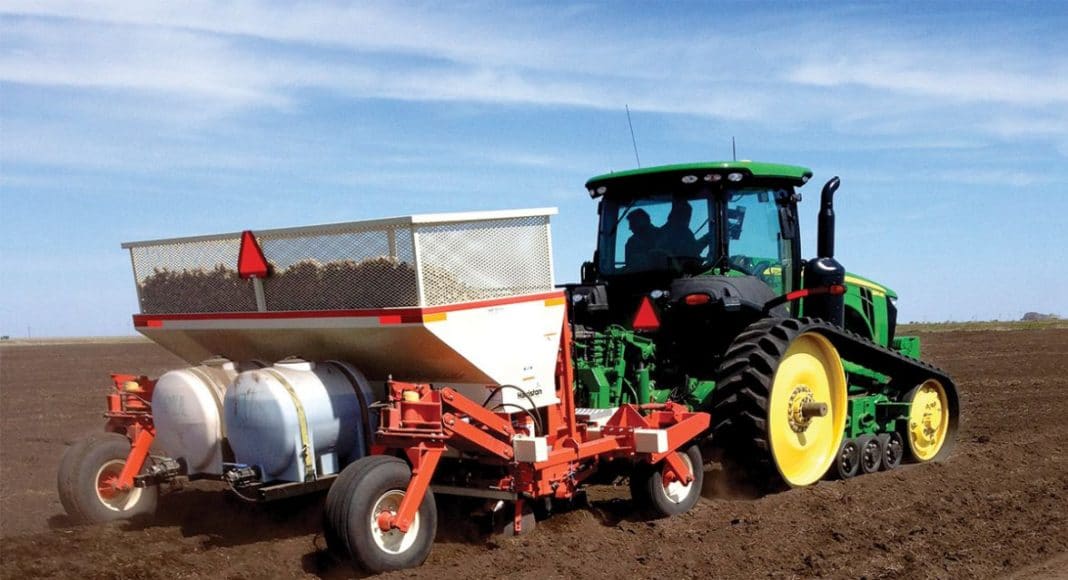 [deck]Why the promise of producing bigger yields with less water has Manitoba potato growers talking about an alternative to conventional row cropping techniques.[/deck]

In recent years, some potatoes growers in Idaho and elsewhere in the Pacific Northwest have started experimenting with bed planting techniques as an alternative to the conventional ridged row system. Now, the lure of producing potentially larger yields with less water has enticed a few innovative growers half a continent away—in rural Manitoba—to give bed planting a try.

Chad Berry, owner of Over and Under the Hill Farms, plans to use a bed planting system on almost one-fifth of his 1,600 acres of potatoes this year. It will be his third year using the technique—which will allow Berry to grow five rows of potatoes in the same space where there had been four—and it comes after a bumper crop of bed-planted tubers in 2012.

“I’m always hoping to increase yields and lower our water consumption. I read an article about some growers who were trying bed planting and I just thought it made sense,” says Berry.

So far, Berry’s Glenboro-area farm is the only operation in the province using this configuration for growing processing potatoes. That could change if bed planting plot trials at the Canada-Manitoba Crop Diversification Centre in Carberry point to a good fit for Manitoba’s potato growers.

The field trials began in 2011 with funding from Growing Forward 1. Five major industry groups—represented by McCain Foods Canada, Simplot Canada, the Keystone Potato Producers Association, Peak of the Market and the Seed Potato Growers’ Association of Manitoba—are all stakeholders in the project.

“I’m optimistic. … I expect that in a few years there will be other growers doing [bed planting] for part of their acreage,” says Garry Sloik, general manager of KPPA. He believes it’s an indication of how Manitoba growers are looking for ways to boost yields by increasing efficiency—an important consideration in this era of parity with the U.S. dollar.

Another Manitoba grower is already planning to give bed planting a try for seed potatoes this coming season. Russell Jonk, owner of Swansfleet Alliance, just purchased a Spudnik 8045 Five-Row Bed Planter, which he’ll use to put in such several varieties as Ranger Russet and Innovator on a portion of his farmland located near Swan Lake and Holland, Man.

The theory is that bed planting permits more potatoes to be planted per acre, which—depending on the variety—can translate into bigger yields. Recent studies have shown additional benefits that extend beyond larger plant populations.

In 2011, the American Journal of Potato Research published results of a study conducted in Idaho that compared conventional ridged row systems with five-row raised bed systems. The researchers found that the flat-bed configuration increased yields by an average of six per cent, and that five per cent less water was required for irrigation. These gains in yield and water-use efficiency were attributed to several factors, most notably, “the probability that planting potatoes in flat beds improves water- and nitrogen-use efficiency because more water reaches the potato roots.”

“In a bed design, multiple rows of potatoes are planted into an elevated, flat area. This configuration reduces the number of furrows in a field, thus increasing the surface area for optimal distribution of potato roots,” states the report. “Published root distribution data show that at most 25 per cent of potato roots are distributed in the furrow, with the remaining 75 per cent or more of the roots located in the hill or slightly below the hill. By eliminating the furrows in a bed format, roots are able to grow in a greater horizontal area. The additional horizontal root growth can support increased nitrogen uptake and water use efficiency.”

According to Bed Planting for Sprinkler Irrigated Potato Production, the result is lower costs for farmers.  “Increased nitrogen uptake and water use efficiency in bed-planted potatoes keeps production costs down, at a time when resource costs have significantly increased without corresponding production gains.”

Andrew Ronald is an extension agronomist with KPPA who’s helping conduct the bed planting plot trials in Carberry. Ronald points out that within North America the movement to examine bed planting along with farm equipment associated with the system arose in the Pacific Northwest only seven or eight years ago. He says it is still early days in Manitoba, and because growing conditions are much different than in the Pacific Northwest region, it continues to be a learning process for everyone involved.

According to Ronald, planting potatoes in five-row beds can result in up to 25 to 30 per cent more rows being planted per acre than in traditional row systems. “We learn a little bit more about this each year,” he says. “Our experience has not been that much different so far from what has been seen in other areas which have tried it.”

The main challenge, explains Ronald, is identifying exactly how—and for which varieties—bed planting might be best suited. On Berry’s farm and in the plot tests at the Crop Diversification Centre, for example, there have been encouraging bed planting results for Ranger Russet potatoes (as well as for Innovator on Berry’s farm) although indications are there isn’t as much benefit for the widely grown Russet Burbank variety.

Ronald says that’s probably because a variety like Russet Burbank has an indeterminate growth pattern and typically produces more tubers under each plant than determinate varieties like Innovator or Ranger Russet, making Russet Burbank plants less likely to benefit from growing closer together.

Ronald says bed planting seems to encourage more evenly sized tubers, which could make it a good fit for varieties that tend to produce oversized potatoes. Similarly, there could be opportunities for end uses requiring uniform or specific tuber sizes, like seed potatoes, specialty potatoes for the table market, or even smaller processing potatoes for niche markets, like wedge potatoes.

“We’re all still learning where this technology is going and where we’re going to get the most benefit, but the seed potato niche seems to be a good one,” Ronald says. Jonk, who plans to try a bed planting system on about 20 per cent of his 1,200 acres of seed potatoes this year, agrees.

“I think especially in seed potatoes, it’s got a really nice fit,” says Jonk. “With all varieties we struggle to keep a size profile small enough to be within the optimum range for seed. With bed planting, it can allow us to better utilize the space in the field and the space within each hill to try to optimize the size.”

According to Ronald, there are indications bed planting might be best suited for part of a grower’s operation rather than the entire acreage, since farmers rarely grow only one type of potato. Because of its potential for increasing water-use efficiency, bed planting might also be a good fit for use on sandy lands—areas where water conservation is the big issue rather than adequate drainage.

The Crop Diversification Centre as well as Berry’s and Jonk’s farms are all located in southwestern Manitoba’s potato growing belt, which tends to have lighter, sandier soils. Berry says his bed-planted potatoes required about 10 per cent less water last year, adding: “That’s important because there’s a limited water supply.” As Ronald explains, “It’s not the plant uses less water; it’s that the water that is applied to it is more efficiently captured by the plant” under a bed planting system.

That’s not to say Manitoba’s bed-planting experiment has been without challenges. According to Berry, weed control can be an issue because, unlike conventional row cropping, mechanical cultivation isn’t an option.

Ronald says this is because potatoes are generally left undisturbed until they are harvested under a bed planting system. In a row system, hilling or cultivation is usually performed within a month or so of planting, which provides some measure of weed control.

The result is that herbicide selection and timing may have to be adjusted to accommodate bed planting, although Ronald points to a potential upside to configurations where potatoes are grown closer together—the plants fill in faster so there’s less time for weeds to become established.

I’m always hoping to increase yields and lower our water consumption. I read an article about some growers who were trying bed planting and I just thought it made sense. – Chad Berry

The biggest obstacle to the widespread adoption of bed planting systems, however, could be the cost. Simply put, there’s no sense considering changing the way you plant potatoes if you don’t have the right equipment for the job. Conventional planters can’t be used, meaning specialized equipment has to be brought in for seeding and possibly for other purposes. The Spudnik 8045 Five-Row Bed Planter, for example, has a MSRP of US$78,000.

“It’s a whole system change,” says Ronald. “You don’t alter something as fundamental as this without changing how you water, how you control weeds and, arguably, how you fertilize.” He says it’s also apparent the degree of change that is required often differs between potato varieties.

Because the suitability of bed planting for potato production in Manitoba is still being defined, both Ronald and Sloik caution it will undoubtedly take time for the idea to catch on with farmers. “There is interest in this,” says Ronald, “but growers are always careful and cautious when they make changes on their farms”—especially when it involves extra capital costs.

Countering the wait-and-see approach could be a willingness to consider adopting new techniques and technologies which will ultimately enhance a farm’s profitability. While it may not represent the best fit for every farm and every potato variety grown in Manitoba, bed planting—with its potential to produce bigger yields with less water—is no doubt worthy of consideration.

As Ronald is fond of telling growers, “the low-hanging fruit was picked a long time ago, and the next wins in agriculture are not going to be necessarily right in front of your face. If we can get better yields [with beds] than from rows in the order of 10 per cent, and if we can do that by using less fertilizer and less water, that’s definitely a direction we want to go. “

Jonk, for one, is excited to be trying out a new planting technique. “I think more people are going to be using [bed planting],” he says. “I don’t think it fits every farm across the province, but from my viewpoint, especially with seed, there’s a really big opportunity here.”

Berry agrees that bed planting is something Manitoba’s potato growers will want to learn more about—especially when they hear about how he’s found it to be generally less work than planting conventional rows.

“It’s a lower workload,” says Berry. “You plant the potatoes and you’re done.”

Potatoes from Maritimes Making Their Way West to Manitoba