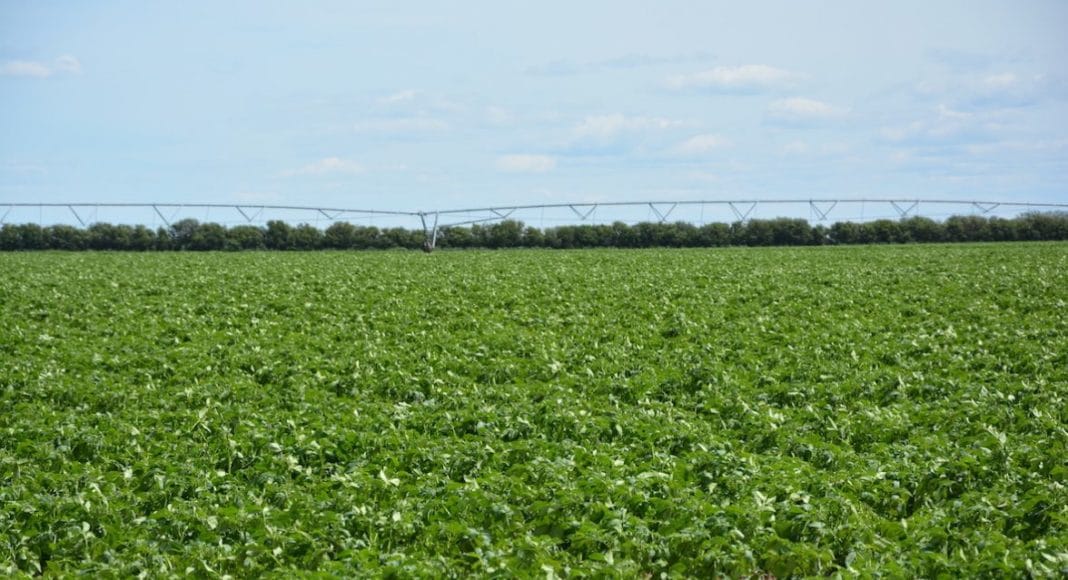 [deck]More acreage, yields will be required to fill capacity at processing facilities in Alberta, New Brunswick.[/deck]

“In addition, North American french fries are made primarily with white-fleshed potatoes, while those coming from Europe are generally yellow-fleshed, providing for product differentiation.” However, Huffaker believes North American processors need to further develop shipping lanes to some of the major markets to reduce costs.

McCain Foods Canada has announced plans to expand its production of frozen french fries in North America, a move that will add more than 400 million lbs. of capacity. Specifically, the company is investing in its plant in Plover, Wis. McCain is also putting $65 million into its facility in Florenceville, N.B., increasing capacity there by more than 100 million lbs. of various specialty potato products.

McCain has made similar investments in Europe, and is the world’s largest manufacturer of frozen potato products, employing about 20,000 people in total and operating 47 production facilities on six continents.

With regards to the range of additional acres that will need to be contracted from Canadian growers for the Florenceville expansion of over 100 million lbs. – and how McCain plans to work with growers to meet this goal – there are no details available. According to Andrea Davis, director of government and public relations, McCain has a 60-year history partnering with Canadian growers. “And [we] will continue to do so to meet the increasing demand for McCain products,” she notes. “While we work with more than 150 farm families across Canada, our goal is to source potatoes local to processing facilities where possible.”

As to why McCain company leadership thinks frozen fries and other frozen potato products are in higher demand globally, Davis explains: “Our products can be found in thousands of restaurants and supermarket freezers around the world – one in every three french fries across the globe is a McCain fry. Our business is driven by good people making good food from good ingredients, and we continue to see increasing demand for McCain potato products in North America and around the world.”

Markets that will be primarily served by the expanded McCain facilities in Florenceville, the U.S. and Europe include domestic food service companies, fast food outlets and retailers. Davis says further site selections targeted for expansion will be announced in the coming months.

Construction of a brand new $350 million Cavendish Farms potato processing plant in Lethbridge, Alta. is expected to begin at some point this year. Replacing the company’s current aging plant, the facility will be finished by summer 2019, allowing Cavendish to more than double its annual production capacity to meet growing demand. Cavendish has two additional potato processing plants, one on Prince Edward Island and one in Jamestown, N.D.

As with McCain, we asked how many additional acres will likely be required to be contracted by Canadian growers for the boosted capacity in Lethbridge and how Cavendish plans to work with growers in Canada to meet this goal, but very little information was provided. Mary Keith, vice president of communications, says: “We are currently completing design and engineering for the Lethbridge project. We would look to provide an update once this work is finished.”

According to Terence Hochstein, Potato Growers of Alberta executive director, the new Lethbridge Cavendish plant will require up to 9,500 additional acres of Alberta potatoes annually, acres to be added over the next three to five years.

“There is farm land available in the current growing areas and I think we’ll see potato growers renting land from neighbours instead of buying,” he says. “A lot of growers are already utilizing rented land in their rotations in order to maintain their current one-in-four, one-in-five, even one-in-six year rotations. There are a lot of high-value crops in this area, and these long-term rotations benefit all of the crops as far as disease pressure is concerned.”

Regarding differences in how growers in Alberta and the Maritimes will work to meet the coming increases in plant processing capacity, Hochstein notes that east coast growers are working very hard to increase their yields and have room to meet expanded processing demand on their existing land by way of changing agronomic practices. Alberta growers already have somewhat of a yield advantage, he notes, due to irrigation practices and different growing conditions.

“We compete with U.S. states like Washington and Idaho so we have to do what’s needed to compete on a large scale,” he says. “It’s also different here compared to the Maritimes in that we have large amounts of land and don’t have to worry about things like loss of topsoil due to coastal winds and storms.” He adds that New Brunswick farmers, for example, also have to contend with a lot of rocks.

Scott Howatt, processing coordinator with the Prince Edward Island Potato Board, confirms that growers on the East Coast are actively working to increase productivity on existing acreage by improving their marketable yields, so that’s likely how most of the 100-plus million pounds of extra potatoes for Florenceville will be provided. “The availability of the right kind of land for processing potato production is limited,” he notes. “Therefore, growers are focusing on improved agronomic practices to meet the volume needs of their processors.”

Polar White, a potato variety from New Brunswick, is growing in popularity in the United States, a news release from EarthFresh says on Feb....
Read more
Marketing & Promotion

Online grocery shopping will be here to stay following the pandemic, but the food supply industry will need to get creative when marketing products. As...
Read more
Marketing & Promotion

As biostimulants have grown in popularity with many options available, you may be wondering what these products are and if they’re right for your...
Read more
Roundtable

The latest and most innovative potato varieties available across Canada —which may just put your old favourites out to pasture.Potato breeding in Canada...
Read more
Tweets by SpudSmartMag